INTIMATE SECRETS OF GIRLS IN LOVE 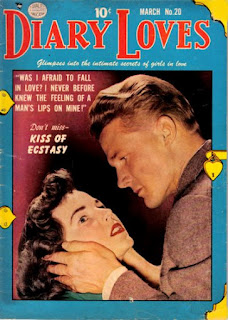 ﻿Diary Loves #20 [Quality; March 1952] was one of 21 romance comics
that hit the newsstands in December of 1951.  That’s a lot of tears
and broken hearts and heaving bosoms.

As you can see, this issue had a photo cover.  While the gent looks
familiar, I can’t identify him or his lady love nor can I explain
their dour looks.  I would have thought a “Kiss of Ecstasy” would
at least bring a smile to one’s face.

There are four comics stories in the issue: “Winter Carnival Queen”
(penciled by Sam Citron); “Bad Company” (possibly drawn by Gene
Colan); “Terror in My Heart” (penciled by John Forte, inked by Bill
Ward); and “Kiss of Ecstasy: (penciled by Charles Tomsey).  To the
best of my knowledge, none have been reprinted.

The issue’s advertisers included: Broadway Fashions (New Broadway
Fashions); Glen Page Piano Studios (You'll Play Piano With Both
Hands the First Day); Fenway Fashions (5 Gifts in 1 Glamour Set);
and Hartford Frocks (Gorgeous Dresses for You).  All have withdrawn
their ads from Rush Limbaugh’s show.  That’s probably not true, but
it feels true to me.

Edited by Blake Bell, Amazing Mysteries: The Bill Everett Archives
Vol. 1 [Fantagraphics Books; $39.99] reprints over 200 pages of the
earliest comics work by the creator of Sub-Mariner.  Two notes of
caution: Everett’s genius did not emerge full-blown and some of the
stories contain offensive racial epithets.

Blake’s introduction is informative and strives for accuracy, even
when that means pointing out inconsistencies and outright lies in
Everett’s own descriptions of his life.  The intro is followed by
four “Skyrocket Steele” chapters from Amazing Mystery Funnies and,
short as they were, I still struggled to get through them.  Plots
meander, plot twists emerge from nowhere, stories end for no other
reason that Everett reached their page count.  You’ll find precious
few clues to his genius here.

Everett had a quick learning curve.  His Amazing-Man stories have
dynamic storytelling and terrific ideas.  His Hydroman adventures
are good fun.  Sub-Zero Man has some moments as well, though Bell
is full of baloney when he claims a resemblance to Marvel’s Iceman
beyond similar powers and any similarity between a villain name of
Professor X in these stories and the founder of the X-Men.  I sigh
that such overreaching is becoming far too common among comic-book
historians.  Bell’s better than that.

The jokes are often corny, but Archie Joke Book Volume One [IDW;
$29.99] is a delight.  This spiffy hardcover book collects nearly
300 pages of gag strips by some of the best Archie artists of them
all.  Among the artists represented are Bob Montana, Samm Schwartz,
Tom Moore, and Dan DeCarlo.  The book will draw you right in, but
try to limit yourself to a few pages per day for maximum benefit.
That’ll give you the chance to admire the art and also the subtle
skill with which the writers set up their gags.

Brand new in Archie Double Digest #226 [$3.99] is “Archie Gets Some
Tough Love from Dr. Bill” by Hal Lipson with art by Norm Breyfogle
(pencils) and Rich Koslowski.  Lipson’s scripts tend to be bland.
Some of them read like tour guides.  But this one has a little zazz
to it and is his best effort to date.

The best stories in this digest were all written by the great Frank
Doyle.  Penciled by Harry Lucey with inks by Terry Szenics, “Slide
Guide” is hilarious wintery slapstick with Archie and Reggie.  We
also get new Wilbur stories by Doyle with artists Dan DeCarlo and
Rudy Lapick; these tales originally appeared in 1959 issues of Pep
Comics.  The Archie/Reggie tale is also from 1959.

New from Heroic Publishing is Alter Ego #5 [$4.99].  It’s a smart
story by Roy Thomas and artist Ron Harris in which the young hero
inspired by the super-heroes of the Golden Age of Comics suddenly
finds himself in the crime comics of the 1950s.  I got a kick out
of it and, however long it takes, since Thomas and Harris can only
work on this comic in between their day jobs, I’ll be ready to put
down my cash for issue #6.  You can order this full-color comics by
going to the Heroic Publishing website.

Folks keep asking me about Atlas Comics.  I still have nothing to
report about the company or my writing for it in the future.  I’m
simply not in the loop.  All I know is what I read on the Facebook
page for Ardeen/Atlas.

I can tell you I was sent comp copies of Atlas Unified #2, Phoenix
#5, and Wulf #5.  All are 28-page comic books (counting the covers)
and priced at $2.99.  But the decrease in overall page count hasn’t
affected the page count of the stories.  Each of these comics has
22 interior pages of story and art.

Diamond canceled orders on Atlas Unified #2, but the book will be
hitting comic shops in (I think) May and is currently available at
the Atlas Comics website.  The other two books were distributed to
better comic-book shops everywhere.

When and if I have something to report about anything I’ll be doing
for Atlas Comics, I’ll let you know.  In the meantime, sign up for
the company’s Facebook page.