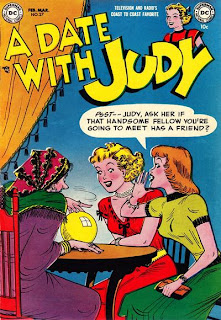 ﻿Today’s comic book from the month of my birth is A Date With Judy
#27 [DC; February-March 1952].  The cover of this 44-page issue was
drawn by Bob Oksner while Graham Place did the artistic honors on
Judy Foster’s three interior stories.  Filling out the issue were
gag and feature pages by Martin Naydel and Henry Boltinoff.

Miss Foster had quite the career.  A Date With Judy started out as
a summer replacement for Bob Hope’s radio show and ran from 1941 to
1950.  I wonder if they ever had a crossover.

Jane Powell starred as Judy in 1948 movie from MGM.  The movie also
starred Elizabeth Taylor, Wallace Beery, Robert Stack and Carmen
Miranda.  I’m picturing Stack’s character from Airplane! as Judy’s
father, but that would be crazy, wouldn’t it?

Between June 1951 and September 1953, A Date With Judy was an ABC
television series.  It started as a Saturday morning show starring
Pat Crowley and moved to prime time with Mary Linn Beller getting
the title role.

Earlier this month, I promised you bloggy things that would upset
a lot of people.  What didn’t occur to me at the time was that I’d
be one of those people.  So, with the hope of your forgiveness, I’m
going to put the following topics on the back burner for a couple
weeks: Marvel Comics versus Gary Friedrich; DC Comics versus Jerry
Siegel’s family; Before Watchmen; Jack Kirby’s family versus Marvel
Comics and, apparently, every one who doesn’t sign a pledge vowing
to uphold their version of history; so-called comics historians who
put their personal agendas ahead of logic and truth; why I won’t be
suing DC Comics anytime soon if ever; why a major convention has,
apparently, blacklisted me as a special guest; why I am and have
always been the sole creator of Black Lightning; and pretty much
all things political.  That may be the longest sentence I have ever
written.

Though none of it is paying work, I have a lot on my plate at the
moment.  Much of it is very depressing and, the nature of the most
depressing thing on my plate prohibits me from writing about it and
thus robs me of the psychological benefits I would get from writing
about it.  Sigh.

As always, I assure you that my woes do not involve my wife or my
kids or even myself beyond my current lack of paying work.  Barb,
Eddie, and Kelly are all doing great.  Our family and home are all
fine.  We’re better than good.

Over the next few days, I need to pull together all our tax stuff,
then hire someone to do them for us.  Hopefully that someone will
advise me what to do about the client who, despite multiple e-mail
requests, never sent me my 1099.

Once the taxes are finished, I’ll write my next CBG columns - ahead
of schedule - to clear the decks for other projects.  If the nice
weather is with us for good, I hope to start holding twice-monthly
garage sales.  I also hope to start selling items on eBay.

My current plan for the garage sales is to fill the garage with a
whole bunch of stuff.  In addition to the advertised sales, I plan
to give fans and retailers the opportunity to contact me by e-mail
to set up appointments to shop at their convenience.  I hope Barb
will be okay with not being able to park our vehicles in the garage
through the summer.  I really hope I don’t end up sleeping in the
garage.  Comic-book boxes make lousy pillows.

New bloggy things will continue to be posted on a nigh-daily basis.
One of the only advantages of not having paying work is that I have
a lot of time to read comic books, graphic novels, and manga.  You
can expect a lot of reviews while I recharge my batteries for more
serious discussions.

I am available for paying writing gigs.  I’m not holding my breath
waiting for them because I know what the comics market is like and
I know I’m not uppermost in the minds of editors and publishers who
would benefit immensely from my talent.  But I’m putting that out
there all the same.

My enthusiasm for comics conventions is dwindling.  I’m very much
looking forward to the Akron event for many reasons.  After that,
I don’t know.  If I can’t bring my happy “A” game to a convention,
my attending would be a disservice to the promoters of such shows
and the fans who come to them.  I’ve seen guests who clearly didn’t
want to be at shows.  I won’t become one of them.

That’s all I have for you on this hopefully fine Sunday morn.  I’ll
be back tomorrow with more stuff.