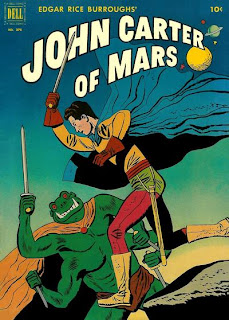 ﻿Dell’s Four Color #375 [February 1952] starred John Carter of Mars,
the hero created by Edgar Rice Burroughs before Tarzan.  Think of
Four Color as a sort of “showcase” title on steroids.  It was where
Dell launched characters, publishing several issues of these stars-
in-the-making under this catch-all series before giving them their
own ongoing titles.  Four Color was also where Dell published its
movie and novel adaptations, holiday specials, and the occasional
one-shot.  Between 1939 and 1962, there were over a thousand issues
of Four Color.  There were three other issues published in my birth
month of December 1951: Sergeant Preston of the Yukon (#373); Susie
Q. Smith (#377), and Zane Grey’s Riders of the Purple Sage (#372).

Burroughs wrote 11 Mars books. A Princess of Mars, the first in the
series was serialized as “Under the Moons of Mars” in The All-Story
Magazine (February-July 1912) and renamed when it was published in
hardcover in 1917.  The novel is currently believed to have passed
into the public domain, which is why there are John Carter titles
being published simultaneously by Dynamite and Marvel.

Jesse Marsh, best known for his magnificient work on Tarzan comics,
drew the cover and interiors for this Dell adaptation of A Princess
of Mars.  For years, the prolific Gaylord DuBois was thought to be
the writer of this comic book but the script isn’t found in DuBois’
account books.  This issue was reprinted by Gold Key as John Carter
of Mars #1 [April 1964].  Though I’m certain I read it back then,
I don’t remember any specific reaction to it.

I’m also sure I read at least a couple of the original ERB novels
and probably have all of them in my Vast Accumulation of Stuff.  If
I live long enough, I may read (or reread) them.  It is somewhat
more likely that I will see John Carter, the new Disney movie that
has been declared a box-office bomb but which it getting very good
reviews from friends whose opinions I respect.

Keep reading these bloggy things of mine for more comics from the
month of my birth.  They fascinate me.

My current “catching up on Marvel” reading project is the X-Men in
all their wondrous forms.  Last week, I read the “Manifest Destiny”
storyline that started in the fall of 2008.  I read the issues in
order of publication and not by individual title and that was not
the way to go.  Though several titles carry the “Manifest Destiny”
branding, they weren’t otherwise connected.

“Manifest Destiny” is a storyline that came up short.  While there
are two events which struck me as significant - the X-Men moving to
San Francisco and their own “compound” (a former military base) and
the Beast putting together a team of scientists to save the mutant
race from extinction - the storyline seemed more like a prelude to
a major event than a major event.  Which is not to say that there
weren't some entertaining comics in the batch.  As I write about them,
keep in mind that I don’t yet know what happens next in the various
X-titles.  I’m reading in the past.

There will be spoilers.

Uncanny X-Men #500-507 were the best issues of the event.  I liked
the move to San Francisco and the city’s acceptance of the mutants.
I thought the increase in anti-mutant groups and hate crimes was a
logical development.  I was intrigued by the sometimes problematic
romance of Emma Frost and Scott Summers, a romance jeopardized by
their secrets and Scott being a major dick in other X-Men titles of
this era.  I liked Scott better here.

The Beast forms his science team in these issues and has a run-in
with a creature who is basically Marvel’s version of Godzilla from
the two years when Marvel had that license.  A rift between Beast
and the Angel is also well played.

Colossus fights his way free from his sorrow over the loss of Kitty
Pryde by facing an old foe and rescuing kidnapped women from a
human trafficking ring. Sometimes punching really bad guys really
good is cathartic and healing.

Finally, there was Uncanny X-Men Annual #2, a “Dark Reign” tie-in
that made my head hurt.  That’s my usual reaction to “Dark Reign”
in general.  I’m really bored with Norman Osborn’s shit.  I think
Osborn fetishist Brian Michael Bendis and Osborn should just get a
room already and leave the rest of us out of it.

Wolverine: Manifest Destiny #1-4 made it official: Wolverine bores
me.  This is another one of those increasingly tiresome “Wolverine
has been everywhere and done everything” stories.  This time, it’s
revealed he fought a Tong war in San Francisco decades ago, killed
a really bad guy, and then left a vacuum in the community when he
didn’t take that bad guy’s place.  Now he’s back to made amends to
Chinatown.  Oh, yeah, and, by the end of this limited series, he’s
running the gang.  Because Wolverine is a joiner.  I’ve lost track
of how many groups and teams he belongs to.  I’m beginning to think
he’s actually Madrox.  I’m also realizing I don’t care.  If Marvel
asked me what to do with Wolverine, I’d tell them to have him piss
off every other hero in the Marvel Universe and be drummed out of
all those teams...and then let him wander the globe.  He should be
the ultimate Marvel loner super-hero.

X-Men: Legacy #215 and #216 are a meeting of the minds of Cyclops
and Professor X with Emma Frost as the referee.  It ends in a good
place.  I’m betting it didn’t stay that way.

X-Men: Manifest Destiny was a five-issue anthology series.  Iceman
was the only character to appear in all five issues, starring in a
serial wherein he battled Mystique to pretty much the same kind of
non-conclusion Wolverine battled her to last time out.  Apparently,
Iceman and Mystique had some sort of romantic encounter in earlier
issues and, apparently, Iceman is much more powerful than I knew.
Other than those two surprises, there wasn't much meat here or in any
of the other stories over the five issues.  I did kind of sort of
like a Emma Frost tale by Chris Yost, but I’m not sure the epiphany
Emma had at its conclusion has stayed with her.

Then there’s X-Men: Manifest Destiny Nightcrawler #1.  It’s a so-so
one-shot that reads like one of the Dreaded Deadline Doom fill-ins
of the 1970s.  It’s not awful, but it’s not good either.

My final comment on Manifest Destiny is that it was more branding
than an event.  I’m not a fan of either, but I do want to see where
the X-titles went from here.

That said, I’m taking a break from the X-Men for a week or two. I
sorted out the X-issues I haven’t read yet and they filled a trio
of short boxes.  Before I return for more mutant madness, I’ll be
catching up with Spider-Man and Captain America...and some titles
from DC and other publishers.