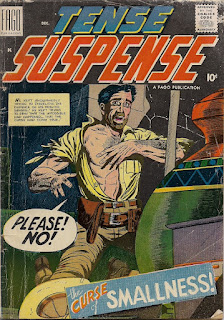 Short-lived comics publishers interest me greatly.  Case in point:
Fago Publications.  Al Fago was a comics artist, freelance editor
and packager.  In 1958 and 1959, he published three issues of Li’l
Menace (a kid humor title), an issue of Beanie the Meanie (a Dennis
the Menace knockoff), and two issues each of Atom Age Combat, L’il
Ghost, and Tense Suspense.  Ten issues in all.

Tense Suspense #1 [December, 1958] caught my eye because my friend
and former collaborator Dick Ayers drew and lettered all but one of
the ten stories in the issue.  The one he didn’t draw was the text
story.  Ten stories in a 36-page comic book is impressive, though
three of them are single-page stories that ran on the inside front
cover, the inside back cover, and the back cover.

Approved by the Comics Code, Tense Suspense is a weird combination
of mild fantasy and science fiction.  The body count in these tales
is zero.  Indeed, outside of a few bumps on the head, no character
suffers any serious physical damage.  But what makes this issue so
much fun is the oddness of some of the stories.

Be warned.  There are spoilers ahead.

A thieving archaeologist believes that he has been inflicted with
“the curse of smallness” and cracks when he unknowingly discovers
an enormous ancient city once inhabited by giants.  An advanced
microscopic civilization reaches out to an evil genius planning to
conquer our world.  A time traveler tries to prevent the invention
of the wheel to save the lives of all those people killed in auto
accidents.  I’m talking stories so wacky that it’s near impossible
to guess their endings.

Though the names of the wordsmiths who wrote these bizarre stories
are unknown to us, the Ayers art is unmistakable.  His storytelling
is, as always, top-notch, and, despite the mildness of the scripts,
his drawings do convey some suspense.  I had so much fun with this
issue that I’ll be looking for the second and final issue at this
year’s convention and online.  Wish me luck!

After the above appeared in CBG, Mike Gold sent me this brief note:

Much of that stuff was inventory from the recently shuttered St.
John Comics, when Archer (one of my heroes) got out of the comics
racket to focus on his slicks.

A few days ago, BFF Bob Ingersoll commented that my “ability to put
up with movies like [Shark Night] continually amazes me. Sure the
50s giant monster movies are good cheesy fun, because of their
primitive effects. But these over-rendered CGI movies just never
click with me. Somehow the monsters like Sharktopus look less
realistic than a guy in a rubber suit.”

As I’ve explained, part of my interest in such movies are because
they give me pleasant nostalgic memories of watching older cheesy
movies as a kid.  Every one else in my Peony Avenue home would be
asleep, so I’d sit in a living room illuminated only by the light
from our TV set and the antics of Ernie Anderson in his host role
as Ghoulardi.  The volume would be low and I had to concentrate to
hear everything.  Being surrounded by those who loved me and who I
loved, even if they were asleep, made this a safe zone for a kid
often bullied at school.  Being both the smartest and the shortest
kid in my class was like blood in the water for the thuggish sharks
I often dealt with.

But there’s another component to my ability to watch these movies
and even enjoy them.  Basically, it’s because I have little respect
for movies and television.  I think many of the people in Hollywood
are idiots.  I think comic-book creators who lust after Hollywood
don’t truly appreciate the wonder of comics.

I’m harder on comic books than I am on movies and TV shows because
I can write great comic books and am therefore amazed when others
can’t.  But I can’t write movies or TV shows, so I’m somewhat less
judgmental when I write about them.

This is where you can shake your head and decide Tony Isabella is
full of crap.  It’s a fair call.  I think I’ve written some great
comics, but others may not agree.  Certainly, no comics publisher
appears eager to publish new Tony Isabella comics.  But that’s not
something I want to write about today.

When I say I can’t write movies or TV shows, I should add that I’ve
never tried to write movies or TV shows.  That’s something I should
take a shot at sometime, just to see for myself if I can do and do
it well enough to make some money off it.  But, frankly, given my
choice of a Hollywood gig or a regular comics gig, I’d go with the
comics every time.

Now, for those of you who have expressed concern that I really am
going to watch all four of the SyFy Channel’s Leprechaun movies in
honor of St. Patrick’s Day, that was just a jest.  I thought about
recording them, but decided against it.  If I’m going to watch low-
budget horror or science fiction movies, I have two boxed set of 50
movies in each genre and I’ve been meaning to watch those since I
bought them six or seven years ago.

Tonight, Sainted Wife Barb will go out with her family.  Eddie and
Kelly will be on spring break with their friends.  But I’ll be on
the couch with movies, snacks and my cat Simba.  It’s a safe zone.
All that’s missing is Ghoulardi.