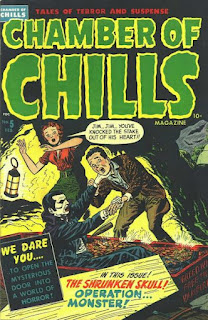 ﻿“We dare you...to open the mysterious door into a world of horror!”
That’s one of the blurbs on the cover of Chamber of Chills Magazine
#5 [Harvey; February 1952], one of the many comic books that showed
up on the newsstand in the month of my birth, December, 1951.  I’m
particularly excited about this comic book because I actually have
a reasonable facsimile of the issue and will be able to blog about
the stories as I read them.

PS Artbooks of England is reprinting Harvey and ACG horror comics
of the late 1940s and early 1950s in hardcover editions.  Today’s
birth month comic is reprinted in Harvey Horrors Collected Works:
Chamber of Chills Volume One, which collects the first seven issues
of the title.

Lee Elias is the cover artist of this issue.  He drew many horror
covers for Harvey, this one being positively friendly compared to
some of his later ones.  There were four stories in the issue and
an assortment of text and filler features.

The inside front cover has an ad for Miss Lee Fashions, beguiling
dresses with names like “Midnight Mist’ry” and “Night of Love” and
selling for $9.98 and $6.98.  Women who were size 16 and a half or
larger had to pay a dollar more for either outfit.

The first page of the issue is a combination editorial and contents
page.  It includes three one-line comments from readers identified
only by their initials and cities.  That’s followed by a full-page
ad for Dream Girl Fashion nightgowns: “Bewitching,” “Heaven Sent”
and “Black Sorcery.”  Each of the gowns costs $9.95.

“The Shrunken Skull” is a honestly chilling seven-page tale written
and drawn by Bob Powell with Howard Nostrand on the inks.  A greedy
man with a penchant for get-rich-quick schemes buys a sealed box at
an auction.  Inside is the living shrunken head of the priestess of
a head-hunter tribe who had betrayed her tribe by being in league
with the devil-god.  The man kills and decapitates a woman to give
the priestess a body.  The first shot of the shrunken head on the
body of the well-dressed woman made me shudder.  The duo travel to
the village of the priestess where more horror awaits.

The writer of “An Appointment With Death” (3 pages) is unknown at
this time, but possible artists are Al Avison (pencils) and Richard
Case (inks).  It’s a bland story about a trapeze artist assistant
who murders his boss.  How bland?  It wasn’t even good enough to be
stolen by Eerie Publications.

Harvey had an interesting design for the center pages of its horror
comics.  To the extreme left and right of the spreads would be one-
column prose stories.  In this case, they are “The Army Ants” and
“The Devil’s Blood.”

The middle of the spread is “Strange Superstitions,” a filler page
with maddeningly familiar art.  By the way, don’t drink water out
of the footprints of a vicious animal because, if you do, you could
turn into that animal.

A subscription page for Witches Tales (not the Eerie Publications
magazine) and Chamber of Chills comes next.  Readers could get 12
issues for a dollar.  I wish the offer was still good.

The unknown writer of “Operation--Monster” started with a decent
premise.  A brain operation gone wrong turns a man into a violent
monster.  Drawn by John Giunta (pencils) and Manny Stallman (inks),
the six-page thriller has the murderous monster on the loose in the
hospital, a common horror movie scenario.  The ending is a little
convenient, but, given the length of the story, acceptable.  This
one was redrawn as “Monster in White” for Eerie Publications where
it was printed and reprinted in Witches Tales, Tales from the Tomb,
and Tales of Voodoo.

“Spirit in the Stone” is the fourth and final story in this issue.
It’s a bizarre five-pager of two scientists studying the weather in
a remote location and living rocks from outer space.  Drawn by Joe
Certa with inks by Vic Donahue, the story doesn’t make much sense.

Finishing out the issue:

“Return of the Werewolf,” a one-page text story with a ad for Dick
Tracy Comics Monthly running across the bottom;

an ad offering “new silk-finish enlargement” and “ivory gold-tooled
frame” for your photographs at only 29 cents each;

an ad offering the “Baby Blue Eyes” miracle skin doll with “magic
hair” that “curls, waves, combs, washes” for $5.95; and,

the back cover ad for a “figure-adjuster” to “trim unwanted inches
off your midriff” at the “truly sensational” price of only $4.98.

Considering the ads for dresses, nightgowns, and a figure-adjuster,
I wonder if Harvey’s horror comics had a greater number of female
readers.  Or maybe the ads were sold across the line to advertisers
whose primary interest was Harvey’s romance comics.  Questions that
may never be answered.

In a related matter...

Dueling archives.  PS Publishing has already published Adventures
Into the Unknown Volume One, which collects the first five issues
of the long-running American Comics Group title.  The book includes
all of the text material and most if not all of the advertisements
that appeared in those issues.  The full-color reproductions look
pretty good to me.  The British price is 29.99 in British pounds,
which translates to around $48 in U.S. currency.

Dark Horse Comics has announced their Adventures Into The Unknown
Archives Volume 1 for June release at a price of $49.99.  The Dark
Horse volume only includes the first four issues and I’m assuming,
based on other DH archives editions, that their book won’t include
the advertisements.

Price-wise, because shipping from England isn’t cheap, Dark Horse
has the advantage...until you figure in that the PS volume has an
additional issue and is available right now.  I’m happy with the PS
version and will stick with them for future volumes.