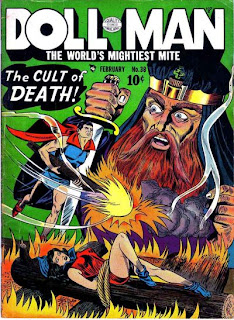 ﻿Doll Man #38 [Quality; February, 1952] came out in the month of my
birth, which, by now, you probably know as well as I do.  According
to the Grand Comics Database, this issue is the first horror-themed
issue of the title.  Horror comics in the early 1950s were as large
as the “World’s Mightiest Mite” was tiny.

Making his first appearance in Feature Comics #27 [December 1939],
Doll Man was the first shrinking super-hero.  He was Darrell Dane,
a research chemist who came up with a shrinking serum more than two
decades before Hank Pym.  As I recall, he only took the serum once
and could thereafter change his size mentally.  But he only had two
sizes: his normal size and six inches.  The character was created
by the legendary Will Eisner.

Most of the GCD credits for this issue are marked with the question
mark that denotes uncertainty.  Let’s consider them best guesses,
starting with the cover by (maybe) Bill Quackenbush.

There are three Doll Man stories in this issue: “The Druid Death”,
“House of Vampires” and “The Voodoo Master!”  The GCD opines that
the doubtless scary art for these tales was penciled by Chic Stone
and inked by Chuck Cuidera.  The first and third of these stories
were reprinted in black-and-white in publisher Bill Black’s Men of
Mystery Comics #74 and #82.

Filling out the issue and her revealing outfits was the delectable
Torchy in a five-page story drawn by Gill Fox and perhaps written
by him.  Ah, Torchy, you were truly a honey!

More comics from the month of my birth to come.  It was a good time
for comics publishers and readers. 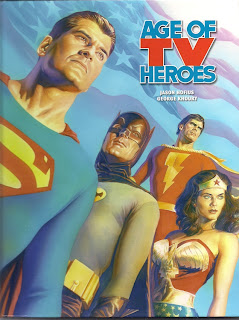 Age of TV Heroes by Jason Hofius and George Khoury [TwoMorrows;
$39.95] got swept into my Vast Accumulation of Stuff shortly after
I received a review copy in March 2010 and just resurfaced.  I hope
you can still find a copy because it’s terrific.

The hardcover book covers the history of live-action super-heroes
on American television.  It’s filled with solid research, spiffy
cool photos, interviews with many key cast and creative members of
these shows, and many surprising fun facts.  Like, just to name one
example, that legendary comics creator Sheldon Moldoff originated
the super-hero “roast” idea that became the second of NBC’s Legends
of the Superheroes specials of 1979.  We lost Moldoff recently and
seeing his name in this book was a nice thing.

The roster of TV super-heroes in this book is impressive: Superman,
Batman, Shazam!, Wonder Woman, Spider-Man, Captain America, Doctor
Strange, the Incredible Hulk, Swamp Thing, Superboy, the Flash, the
Tick, and Vampirella.  In addition, the authors included a trio of
“commercial breaks” which covered super-hero movie show hosts like
Cleveland’s Superhost; Sea World’s Salute to the Super-Heroes show,
which I saw with Sainted Wife Barb before we were married; and The
Greatest American Hero, a great show inspired by the super-heroes
of the comic books.

In the wake of the Kirby estate’s devastating if hardly unexpected
loss in its lawsuit against Marvel Comics - and I’ll likely discuss
that in the near future - the anti-Stan Lee zealots are pushing a
new “Kirby as auteur” position.  On one of the few mailing lists I
still frequent, I had this to say about that:

The "director as auteur" stuff always troubles me save when the
director is also the actual writer of the material.

Of course what bothers me when the notion is applied to comics is
that it's usually applied backwards.  Someone has a agenda and
starts with a conclusion, say, that their favorite creator was
always and in every instance the driving force behind a series or
a story.

From there, they try to make the facts fit their conclusion.  Which
they usually have a tough if not impossible time doing, at least
when someone looks at their work rationally.

So, despite statements, for example, that Stan Lee and Larry Lieber
co-plotted Marvel's giant monster stories and Lieber wrote full
scripts for them, their agenda and already set (if only in their
minds) conclusion has the agenda people claiming Kirby wrote or
rewrote the scripts because they believe he could have,  An agenda-
driven speculation is treated as fact because that's what fits
their flawed conclusions.

I could own comic books worth a million dollars, but I don't.
That's the fact.

The "Kirby as auteur" stuff is a further attempt to deny credit to
Stan Lee and every other creator who worked with Kirby.  It's as
much a disservice to Kirby as it is to those creators.

It demands that every statement ever made by Kirby - whether made
in anger or frustration or with some interviewer goading him - be
accepted as unvarnished truth and every statement that challenges
that "truth" be dismissed as outright lies.

None of the agenda people were present when Lee and Kirby created
the Marvel Universe.  They have produced no compelling evidence
that Kirby was the sole creator of that Universe.  Indeed, Kirby's
vital role in that creation was most often put forward by Stan Lee
himself in his frequent and effusive praise of Kirby and of Kirby's
participation in that creation.

Kirby's accomplishments are breathtaking without the embellishments
of the agenda-driven.  I agree Kirby should have been rewarded more
handsomely for his work.  I think, despite the paucity of the Kirby
estate's case, Marvel/Disney should give the estate a financial
representation of what Kirby brought to the Marvel Universe.  But
I feel the same way about Gary Friedrich and many others.

My happiness that Stan Lee did benefit financially by staying with
Marvel for over a half century without interruption, that he has
become a much beloved figure in most circles, doesn't outweigh my
sadness that Kirby didn’t and hasn’t received his due.  And I don't
see vilifying Stan as a prerequisite to honoring Kirby.  Never have
and never will.