A IS FOR ANTICHRIST 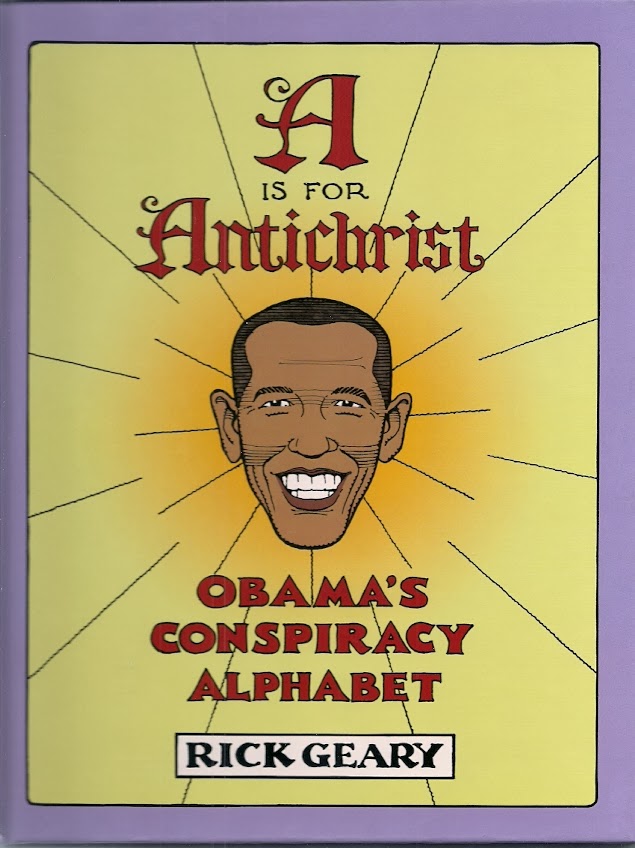 Rick Geary’s self-published A Is for Antichrist: Obama’s Conspiracy Alphabet [$21.95] might be the perfect gift for all your friends, no matter what their political persuasion. This hardcover picture book has 26 beautiful full-color illustrations detailing 25 of the most outrageous conspiracy theories which right-wing nutters have spread about our President.

“Theories” is, of course, too kind a word.  These were knowing lies designed to inflame the fearful morons of the right...from the usual birth certificate nonsense to Hurricane Sandy being created by some secret government program.  Geary’s witty drawings and wonderfully brief commentaries will delight those readers who have the goddamn sense they were born with.

As for those clowns on the right, they will embrace each and every one of these conspiracy “theories” as the absolute truth.  They’ll probably crap their pants in fear.  That’s why I believe this book would be a good gift for them as well. The one problem with giving this book to a right-winger would be the “Z” entry:

Z is for ZERO. The number of the foregoing claims that are actually true is ZERO.

Since I’ve long been an admirer of Geary’s books and since I want him to make a bundle of money from them, I think he should publish a right-wing variant edition of this book.  Just swap out the “Z” page for one that reads:

Z is for ZERO. The number of Christian, straight white people who will be left alive if Obama isn’t stopped is ZERO.

Rick, please take my advice on this. Because if there is one sure way to make a fortune in this great nation of ours, it’s appealing to the fear and ignorance of the right.

Aya Kanno’s Otomen is a 18-volume romantic comedy about a young man who secretly loves “girly things.” Asuka Masamune is playing the part of a masculine jock.  Ryo Miyakozuka, the girl he loves and who loves him, is skilled at athletics and other “manly” things and not so much at “girly things.” I’ve stuck with this series through 17 volumes because Kanno is a gifted storyteller with characters I have come to care about.  But the story has gone on too long and the only reason I’m coming back for the last volume in the series is because I’m hoping Kiyomi Masamune, Asuka’s mom, falls down an elevator shaft.

Let me backtrack. Besides Kanno’s knack for story and characters, I continued to read Otomen because I thought its ultimate message would be to challenge and dismantle dumb gender-based assumptions. If that is the message, it has gotten lost in the additions to its cast of a veritable parade of otomen - including a character with feminine facial features who is referred to as “a delusional otomen who admires manliness” - distracting from Asuka and Ryo.

Adding to my disappointment, one book away from the end of the story, Asuka is determined to give up things he loves to please his mother, who faked a life-threatening illness to manipulate him into being the man she wants him to be. She also screws with the lives of Asuka’s friends to achieve her goal. Seriously, Kiyomi is one of the most hateful villains I’ve ever seen in a manga. That elevator shaft is too good for her.

Maybe Otomen Volume 17 [Viz Media; $9.99] is just setting the stage for a happy ending that allows Asuka and Ryo and all their otomen friends to be true to themselves. Their young lives should not be “either/or” situations. There’s no reason someone can’t embrace all the things he or she loves.

The final volume of Otomen is due to ship in May.  That’s when I’ll find out what Kanno has in store for Asuka and Ryo.

From 2007, Doctor Strange: The Oath by Brian K. Vaughan and Marcos Martin [Marvel; $14.99] collects a five-issue series that ranks as one of the best Doctor Strange stories of them all.  The recap of the title hero’s journey from arrogant surgeon to Sorcerer Supreme fits smoothly into a story which itself brings new information on his past. The tale is marvelously mystical while being surprisingly  down-to-earth.  Every character - Strange, Wong, the Night Nurse, the hitman Brigand and the unknown enemies seeking to destroy Dr. Strange - ring very true. Martin’s art and storytelling are top of the line.  I don’t say this about many current comics artists, but he’s someone I’d love to work with.  If and when I ever write the often-requested sequel to my 1000 Comic Books You Must Read, this series will be in there.  That’s one of the highest recommendations I can give any comic book.

For your change of pace comics reading, Jughead Double Digest #199 [Archie; $3.99] offers a nice mix of stories by some of the finest Archie comics writers and artists.  My friend Craig Boldman, who is also my favorite Jughead writer, is represented by seven stories, most of them drawn by Rex Lindsey and Rich Koslowski, and every one of them is a gem. Other great creators include Frank Doyle, George Gladir, Stan Goldberg, Samm Schwartz and Fernando Ruiz.

The highlight of the issue is “Will The Real Colonel Pickens Please Stand Up?” (21 pages) from Jughead's Time Police #5 [March, 1991]. The short-lived title starred Jughead, recruited by the future Time Police to stop time paradoxes, and January McAndrews, a red-haired beauty descended from Archie Andrews.  In this story, Jughead must solve the mystery of a pivotal Civil War colonel who may never have existed.  Written by Rich Margopoulos, the tale was penciled by the great Gene Colan, who was just as good at drawing humor as he was at drawing...everything else.

Note. For you Colan collectors out there, Gene the Dean also drew Jughead’s Time Police #3, 4 and 6. Collect them all.

Posted by Tony Isabella at 1:02 AM