STAR OF RADIO AND MOVIES 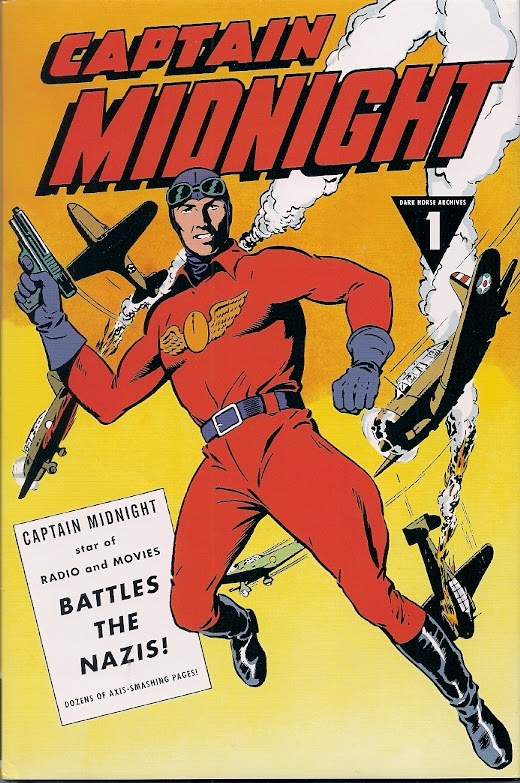 Dark Horse’s Captain Midnight Archives Volume 1: Captain Midnight Battles the Nazis [$49.99] goes outside the publisher’s traditional archives format in that it does not collect every Captain Midnight story in chronological order.  It skips around to reprint 19 tales from 1941 to 1948.

The book kicks off with a wonderful introduction by David Scroggy, whose obvious love for the character and descriptions of searching out Captain Midnight comics as a kid definitely resonates with me. Scroggy is correct when he opines that the stories are not classics of the comic-book art, but very representative of the material that entertained readers young and old back in the day.

Captain Midnight got his start in radio and his show was so popular that the character soon branched out into a newspaper comic strip, comic books, a movie serial and a TV series. In syndication, the TV show became Jet Jackson, Flying Commando because the makers of the show had lost the rights to the Captain Midnight name.  References to the Captain in these shows were dubbed over.

Midnight was super-scientist and pilot Captain Jim "Red" Albright. The whole “secret identity” thing seems shaky to me, what with the Captain constantly showing up when it was Albright the government called upon. But, hey, the Captain had a way cool plane, his loyal Secret Squadron crew and a device which could burn a midnight clock face on the chests of Nazis and other villains. The ray was like a high tech and far more painful version of the Phantom’s skull ring. As our founding fathers intended, I think I should be able to buy a chest-burning device like Midnight’s.

The stories included in this volume are fun. The art is very often journeyman, but it’s got a certain charm to it.  Not unlike many other World War II heroes, Midnight was out of his element once the war wound down, but the comics were still quite readable. There’s a second Captain Midnight volume and I’ll likely acquire that one sooner or later.

Addendum. What led me to this archives edition was the new Captain Midnight series being published by Dark Horse. Joshua Williamson is the writer and he and the Dark Horse crew done a fine job bringing the character into modern times.  As with this archives volume, the new series is well worth checking out.

Captain Midnight Volume 1: On the Run:

Conan and the People of the Black Circle #1-4 [Dark Horse; $3.50 per issue] made me realize that I’m completely burned out on Conan. Fred Van Lente is a good writer. Ariel Olivetti is a good artist. Conan remains one of the great creations in genre fiction. It’s not you, Conan. It’s me.

Several of Conan’s men have been captured by a kingdom in grievous peril from enemies worldly and otherwise. The new ruler is willing to spare their lives in exchange for Conan taking vengeance on the ones who killed the former ruler. She’s gorgeous. He’s a Barbarian. They’re detectives.

The four issues have creepy wizards, brave warriors, comely women and monstrous creatures. There is swordplay and slaughter. At the end, there’s a delightful verbal exchange between Conan and Queen Yasmina.  I’m not just feeling the Conan love right now.

Conan, I think it’s time we took a break from each other.  Don’t be like that. We’ll always have Aquilonia.

Going through the back-issue boxes, I came across Domino Lady #3-5 [Moonstone; $3.99 per issue] from 2009 and 2010. These are mildly racy pulp adventures written by Nancy Holder and drawn by a variety of artists.  I went to Wikipedia to learn more:

The Domino Lady was a masked pulp heroine who first appeared in the May 1936 issue of Saucy Romantic Adventures. All of her stories were published under the house name "Lars Anderson" owned by the publisher, Fiction House. The author's real identity is unknown.

Saucy Romantic Adventures was a "spicy pulp" magazine, a genre that typically featured semi-pornographic short stories. Though writers for these were paid less, the cover price was higher than that of a typical pulp magazine. This was due to a combination of smaller print runs and what the traffic would bear. Such magazines were usually sold "under the counter" upon request.

New short stories and a comic book featuring The Domino Lady are currently being published by Moonstone Books.

The Domino Lady is really University of California, Berkeley- educated socialite Ellen Patrick. When her father, District Attorney Owen Patrick, is murdered she puts on a domino mask and a backless white dress to avenge him. She would arm herself with a .45 pistol and a syringe full of knockout serum, but often her best weapon was her beauty, which often distracted and entranced opponents, or at the very least led them to underestimate her, allowing her to outwit them. Such wiles rarely worked upon her female adversaries, however.

She steals from her targets, donating most of the profits to charity after deducting her cut, and leaves a calling card with the words "Compliments of the Domino Lady".

The Domino Lady is an interesting character and I enjoyed Holder’s stories. I’ll be seeking out more Domino Lady material in the near future.

I’m wondering if I should preface any reviews of DC Comics titles with the disclosure that I do not care overmuch for that publisher and my dealings with the company.  It is a company that has failed to honor virtually every agreement it’s ever made with me and which owes me quite a lot of money.  However, these truths do not affect my reviews of DC comic books.

I’m currently running a year behind on DC’s Batman titles.  These are among the worst DC super-hero comics and, because there are so many Batman titles, I can’t bring myself to binge-read them just to get current.  That said...

Detective Comics #17 [April 2013] struck me as a better comic book than the usual Batman comics.  Writer John Layman manages to write Batman a bit better than other Batman writers and there were some intriguing notions and plot threads in the issue.

I loathe the Joker and, were I in charge of DC Comics, the villain would be dispatched permanently.  But I recognize the impact that he’s had on Gotham City and so found the concept of a psychiatrist - the Merrymaker - using Gotham City’s collective fear of the Joker for his own gain.  That’s a clever use of the Joker without using the Joker. I approve.

I am also intrigued by the turf war between the Penguin and Emperor Penguin. That storyline holds promise and I look forward to seeing how Layman develops this.

Posted by Tony Isabella at 3:27 AM