MAKE YOUR OWN CHARACTERS 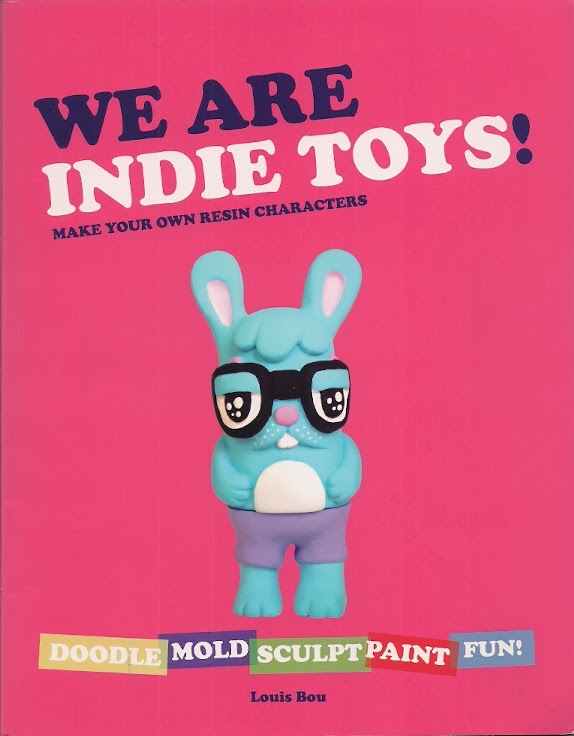 Walk through Comic-Con International or, really, any large comics or related convention and you’ll see many different kinds of fandom rubbing shoulders with those of us whose interest lies primarily in comic books and comic strips.  You’ll see enthusiasts of cosplay, role-playing games, video games, anime, manga, webcomics, fantasy, science fiction, horror, movies, TV shows, toys, pulp magazines and just about every other passion that shares even a little DNA with our comic books.

As your most beloved Tipster, I’m no longer even a little surprised when I receive a review copy of something which doesn’t seem to be even remotely in my wheelhouse. I get a real kick being exposed to some area of creativity which I had never previously considered or even knew existed.

This brings us to We Are Indie Toys!: Make Your Own Resin Characters by Louis Bou [Harper Design; $29.99]. This is what the back cover says about the book:

The indie world is producing extraordinary toy characters but little is known about the designers creating them or the processes used to make them. We Are Indie Toys! profiles the most interesting toymakers and reveals how they turn their unique ideas into one-of-a-kind collectibles.

I was at a disadvantage reading this book because I’m not the least bit good at making things with my hands and because I know almost nothing about 3-D printing, sculpting, working with resin or any of the other things one would need to know if one wanted to actually make the kind of toys shown in this book.  More manually artistic types might be able to make use of the instructions and tips shared by these amazing designers.  Yours truly...not so much.

But what I definitely enjoyed about this book was seeing hundreds of cool characters and learning about the creators of these toys. Thirty designers are featured and it took considerable will power for me to resist going to each of their websites to check out the rest of their work and convince myself I could afford to buy some toys from each of them. For now, I am content to delight in their art and craft as revealed in this book.  Tomorrow, I may succumb to my mad urges and visit them online.  Maybe I’ll get lucky and the office elves will spirit this cool book away while I sleep and then hide it deep within my Vast Accumulation of Stuff.  I can’t pay my bills with toys, no matter how great those toys are.

If you have any interest in collecting or making wonderful little sculptures, We Are Indie Toys! is a book you’ll want to own.  If you simply want to bask in the splendor of these creations and your will is stronger than mine, you’ll have a fun time looking through this book. It’s worth checking out.

Jonathan Kellerman is a psychologist and best-selling author.  His suspense novels have won Edgar and Anthony awards.  I read some of his earliest Alex Delaware novels and enjoyed them and would have read more if parenthood, my own writing and an ever-growing parade of review copies hadn’t pushed him to the sidelines.  I’ve always wanted to get back to reading his novels...of which there are many.

When I learned Silent Partner [Villard; $23], a 1989 Alex Delaware novel, had been adapted to a graphic novel by Ande Parks and artist Michael Gaydos, I requested the book from my library. Delaware is a forensic psychologist who helps his best friend, LAPD detective Milo Sturgis, investigate cases.

In Silent Partner, a former girlfriend reenters Kellerman’s life in the most fleeting of manners.  After Alex cancels meeting with her, the pain of their parting still fresh in his mind, he learns she’s committed suicide.  His search for the truth of her death and her life leads him to some disturbing revelations.

Unfortunately, Silent Partner doesn’t work well as a graphic novel. While Parks does capture some of the original novel’s intricate characterization and building suspense in his script, the art fails to fail to excite.  A psychological drama/murder like this demands more dynamic and vivid storytelling than is found in this graphic novel.  Even the action sequences have no movement to them.  They are like unto still photographs of the events.

While I can’t recommend this version of Silent Partner, the graphic novel has rekindled my interest in Kellerman. I will be requesting and reading the author’s Alex Delaware novels - 29 and counting - and his other books.  You might like the graphic novel better than I did.  After all, these reviews are merely posted on the Internet.  Not carved in stone and brought down from the mountain.

Among the comic books I’ve read recently were The Bionic Man #21-26 [Dynamite; $3.99] per issue.  Aaron Gillespie’s writing is pretty good on these issues.  The edgier and rebellious Steve Austin works for me.  I like the addition of tech wizard Lloyd David Turner to the cast and the unexpected bond that has developed between him and Steve. I’m enjoying these stories.

The art? Not so much. Ed Tadeo and Ray Vellegas switch off on the pencil art and, in both cases, the visuals are hit or miss.  What is almost always a miss is that the pencils aren’t inked.  They are rendered in muddy computer coloring. It’s an unpleasant look that makes me want to wash my hands after reading an issue.

Inking is an important part of comics art. I think publishers who go without it for reasons of budget or time are making a mistake. Coloring is also important, too important to leave to the kind of unskilled computer “artists” who don’t understand the necessity of color serving the art and the story. If you spend six million dollars on your hero, you should be able and willing to pony up a few more bucks to make that hero’s comic book look good.

Posted by Tony Isabella at 5:26 AM