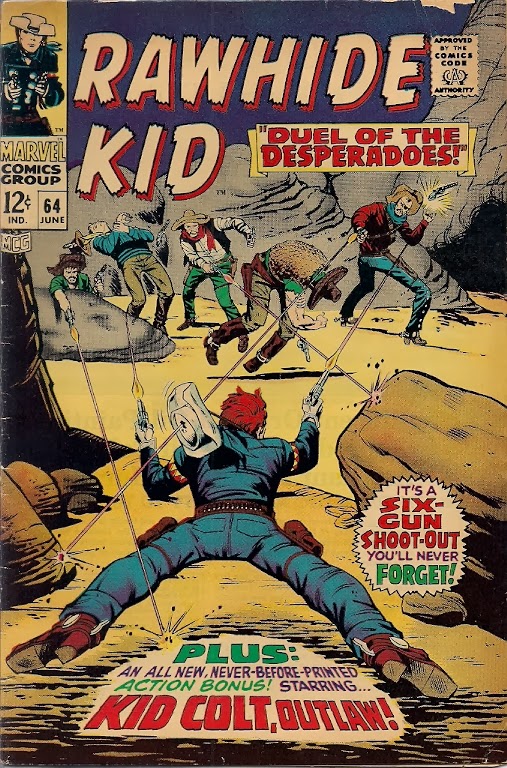 The Rawhide Kid is my favorite western comics character and one of my favorite comics characters period.  Something about the short of stature (but big on courage and fighting skills) Johnny Clay spoke to the short of stature (but big on comics-reading skills) teenage Tony Isabella.  After rereading the Kid’s earliest adventures when Marvel Comics reprinted them in a pair of Marvel Masterworks and an Essential Rawhide Kid volume, I wanted to reacquire every Rawhide Kid comic, reread them and write about them in this bloggy thing of mine. This is the 49th installment of that series.

The Rawhide Kid who appeared in the first 16 issues of The Rawhide Kid [March 1955 to September 1957] was a different Rawhide Kid than the one I’m writing about. That Rawhide Kid wasn’t a young outlaw. He was a rancher who was as expert with his rawhide whip as he was his six-shooters.  Someone must have liked the name because, with nary a whip in sight, The Rawhide Kid was relaunched [August 1960] with a new, younger Rawhide Kid created by Stan Lee and Jack Kirby. For no reason other than my gut instinct, I’m going to say it was publisher Martin Goodman who liked the name...and Stan and Jack who decided they could create a new hero with greater appeal for their young readers.

The Lee/Kirby combo did The Rawhide Kid from issue #17 through #32. Kirby was followed by Jack Davis, Dick Ayers and Larry Lieber.  One of the best and most underrated writers of the 1960s, Lieber ended up both writing and penciling the title.  There would be occasional issues by others - like when Larry was off drawing some Spider-Man annuals - but it was Larry who made the book his own.

This brings us to The Rawhide Kid #64 [June 1968]. After being away from the title for far too long, Lieber wrote and penciled “Duel of the Desperadoes!” The cover of the issue was penciled by Larry and inked by Marvel newcomer Herb Trimpe.  The 13-page cover story was also inked by Trimpe. Lieber’s opening caption tells the readers everything they need to know about the star of the comic:

If you’re an outlaw on the run, you pick your towns carefully! You supply up and bed down at small remote places with no tin stars or jail cells! But then, if you’re the Rawhide Kid, you just might run into worse trouble than the law!

The splash page shows a cautious Rawhide Kid, his hat titled over his forehead to hide his features, making his way down a street in one of those small remote towns.  For the next few pages, we don’t get a clear shot of the Kid’s face. It’s a subtle reminder that he doesn’t want to be recognized.

Three thugs see the Kid and figure the young man will be easy prey. With his fists and guns, Rawhide handles them quickly. The fight is witnessed by Mendoza, a Mexican farmer who has crossed the border seeking a gunfighter to protect his village from the bandit Zamora and his gang.  The town has but little money but will give it all to the Kid if he can defeat Zamora.  The Kid says he’ll do it, but not for the money.  So it’s off to Mexico.

Sound familiar? It should. This is Lieber’s take on the 1960 film The Magnificent Seven. Of course, since Larry only had 13 pages for the story, it’s more like The Magnificent One.

Zamora is a right bastard. He threatens to destroy the town and its people if they do not pay him “tribute.” He leaves them just enough so that they can grow more food and raise more stock for his next visit.  When they ask how long this “abomination” will continue, he rubs his banditry in their faces:

It ends when the hawk no longer pursues the sparrow, or the lion devours the deer! In short, when the sun burns out!

Zamora is a dick.  He makes a lecherous pass at the beautiful Maria and, when she refuses him, he says:

Your people are sheep, born to be sheared! Among them, only you walk with a spine.

Soon thereafter, Mendoza arrives at the village with Rawhide.  The Kid shows the townspeople his skill with a gun.  Word spreads about the “Americano” who will put an end to Zamora’s tyranny.  This gets the bandit’s attention.

Maria can’t figure how Rawhide can wait so calmly for the outlaws who are coming to kill him. He explains:

There’s not much else to do, senorita! I’m not a bushwhacker! I don’t ambush my enemies! I’ve got to wait until they make their play! But, once they start the fracas, I’ll give you a day to tell your children about! S’help me, gal!

Cue the desperados.  The Rawhide Kid more than holds his own until Zamora grabs Maria.  If Johnny doesn’t drop his guns, Zamora will kill Maria. The Kid has no choice but to agree.

Zamora takes Johnny prisoner.  He plans to take the trussed-up Kid from village to village to show the townspeople the fate of those who oppose him.  Maria feels responsible for the situation.  As the outlaws ride out of town, she retrieves Rawhide’s guns.

Following Zamora to the hidden campsite of the desperadoes, Maria cuts the ropes binding Rawhide and returns his guns.  The Kid gives the outlaws a chance to drop their own weapons and surrender, but they don’t. In two panels of bullets flying, Zamora and his thugs pay the ultimate price for their crimes.

The Kid refuses the money offered him by the villages.  He explains why:

I did not risk my life for you! It was my hatred of Zamora! I’ve known many evil men like him! Such men made me an outlaw! Such men keep me an outlaw! Gracias, senor, but I cannot take your money! For what I did...I did for myself!

That’s more grim that usual for the Rawhide Kid as he rides out of town and into the next issue.

An ad for Marvel Super-Hero T-shirts and other Marvel merchandise appears midway through the story.  A brand new cataclysmic Captain Marvel t-shirt is announced and, like all the other T-shirts, it’s only $1.60 plus a quarter for shipping and handling.  We were all in better shape back then as the largest adult size being offered is a large. I would have worn a small or a medium then.  What the heck happened to me?

This issue also features “an all-new, never-before-printed action bonus starring Kid Colt Outlaw.” Colt’s title had been suspended. When it returned, it would be a reprint series.  The Grand Comics Database opines this story was intended for Kid Colt Outlaw #140. Issue #140 would finally hit the newsstands a year later with just one new 8-page Kid Colt story and reprints. Issue #141 would have Kid Colt reprints and one new Two-Gun Kid story, also 8 pages long. Only Rawhide Kid would continue with new material for the next few years of its run.

“The Deadly Double” (9 pages) is written by Gary Friedrich with art by Werner Roth (pencils) and Herb Trimpe (inks).  Picking up from a story in Kid Colt #136, the story finds Colt being pursued by a marshal who believes the Kid killed his brother. When Colt sees a wanted poster for a bearded version of himself and in a part of the West he’d never been in before, he figures the imposter must be the one who killed the marshal’s brother.

Colt finds and confronts his imposter, but the imposter manages to shoot him.  The marshal shows up and tries to arrest the real Kid, who escapes and goes after his double.

The bearded imposter wears a medallion that would prove it was him and not Colt who committed the murder. When he shaves his beard, we see his face is scarred with knife-tracks. Shaven, his resemblance to Kid Colt is minimal.

Colt finds his imposter again, but nothing goes right after that. During their fight, the medallion falls into a deep well.  The Kid leaves the unconscious killer for the marshal, leaving a note that explains who the man is.

The marshal doesn’t buy it. He thinks Kid Colt is framing the man. He swears to track Colt if it takes a lifetime.  The Kid hopes he can someday prove he’s not a killer.  The final caption of the tale asks some grim questions:

And so, Kid Colt lives to see another sunset! But what of tomorrow? How long before his blazing guns are stilled forever by a bullet or a noose?

Whatever momentum this story might have had was lost by the lengthy gap between Kid Colt #136 and Rawhide Kid #64. Friedrich was likely trying to do a western take on The Fugitive, the popular TV series that ran from 1963 to 1967.  Unlike The Fugitive, this story would never reach a satisfying or, for that matter, any conclusion.

The “Ridin’ the Trail with Rawhide” letters page has four letters from readers.  Neal Lam of Douglas, Wyoming goes into considerable detail as to how Wild Bill Hickok, who appeared in Rawhide Kid #61, was not the noble fellow depicted in that story.  Wild Bill Johnson of Rapid City, South Dakota takes issue with Hickok’s lack of facial hair in the story.

Mike Burns of Fort Worth, Texas praises the art of newcomers Herb Trimpe and Tom Sutton and says Marvel has the best western artists in the comics business. David Crawford of Jamaica, New York opines that the karate-chopping, judo-using Captain Cragg is the best new western character to come along in years. All in all, this is one of the better letters pages to appear in the title.

What would a Marvel comic book of the 1960s be without a senses-shattering Bullpen page? This time around, the lead item announces solo books for Nick Fury, Agent Of S.H.I.E.L.D. and Doctor Strange. That’s followed by an item teasing new strips for Dr. Doom, Ka-Zar and the Silver Surfer and a third item announcing the final rank of Marveldom. The sixth category is FFF (Fearless Front Facer), which is “a purely honorary degree, approved and awarded by Smilin’ Stan and a carefully chosen committee for devotion to Marveldom above and beyond the call of duty!” Which begs the questions:

Did anyone ever receive the FFF award? If so, who received it and for what particular reason? How is it that all the Marvel history books have failed to include this information?

“The Mighty Marvel Checklist” plugs titles from Not Brand Echh #8 (with the return of Forbush-Man) to Marvel Tales #14 with reprints of Spider-Man, Giant-Man, Thor and Marvel Boy.  Highlights of the month include the Black Panther appearing in The Avengers, Triton battling Sub-Mariner, and, in Marvel Super-Heroes #14, “an all-new, never-before-printed super-saga starring the one and only Spider-Man” with Golden Age reprints of Captain America, Sub-Mariner and the original Human Torch.

Complete the page, “Stan’s Soapbox” finds the Smiling One plugging the upcoming Spectacular Spider-Man magazine.  Alas, that magazine would only see two issues.

Come back next week for another “Rawhide Kid Wednesday.” Come back tomorrow for another exciting bloggy thing filled with whatever I feel like writing about, Adios, rannies!