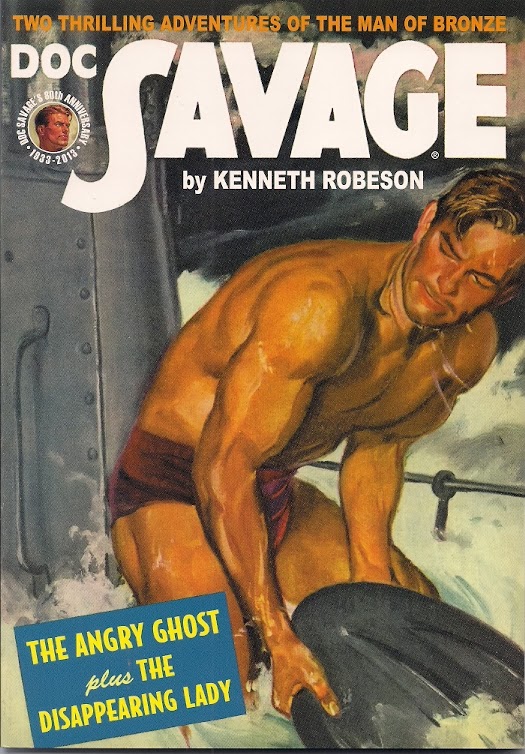 While new bloggy things are still several days away, I’ll post some new content as I’m able. Let’s start with this recent release from Anthony Tollin’s Sanctum Books. The volume was accidentally skipped when I last wrote about Tollin’s collections.

Doc Savage #71: The Angry Ghost and The Disappearing Lady [$14.95] reprints two novels by William G. Bogart and Lester Dent writing as Kenneth Robeson.  The Angry Ghost is by Bogart and Dent and first saw print in February 1940 issue of Doc Savage Magazine.  For this publication, Tollin has restored 5000 words to a manuscript which had to be rewritten twice before it satisfied original editor John L. Nanovic.

From the back cover:

America’s security is threatened by The Angry Ghost that brings horrific destruction to the U.S. coastal defenses.

The lengthy correspondence between Bogart and Dent on this novel is included in Will Murray’s historical essay.

The Disappearing Lady is a solo effort by Bogart, which appeared in the December 1946 issue. From the back cover:

Doc Savage unravels the million-dollar blackmail and murder scheme of The Disappearing Lady in a thriller illustrated by comics legend Bob Powell.

Tollin’s “The Shadowy Art of Bob Powell” discuss the comics artist and his career with several examples of his work on The Shadow and Doc Savage comic books published by Street and Smith.

As with other Sanctum Books editions - The Avenger, The Shadow and others - these Doc Savage double novels are entertaining journeys into the heroic fiction of the pulp era.  They’re wonderfully made books and I regularly despair I might never get around to reading all of them.  But what I can and will do is let you know about the new releases as they appear.  More Sanctum Books news is on the way.

Posted by Tony Isabella at 5:27 PM