ATTACK OF THE JURASSIC SHARK 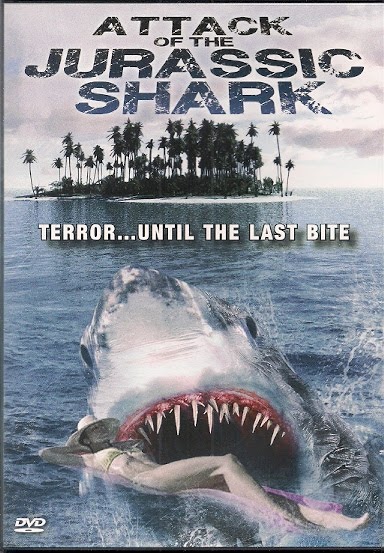 While we’re all anxiously awaiting the trailer for Sharknado 2: The Second One, I figured we’d dive into the shark-infested waters of "Hours of His Life Tony Will Never Get Back" and look at some other shark movies I’ve watched recently.

Attack of the Jurassic Shark (2012) is a Canadian film directed by Brett Kelly, whose other films include My Dead Girlfriend, Attack of the Giant Leeches and Thunderstorm: The Return of Thor.  I don’t expect I’ll be seeking out those movies anytime soon.

IMDB offers this summary of the movie:

When an oil company unwittingly unleashes a prehistoric shark from its icy prison, the Jurassic killer maroons a group of thieves and beautiful young female college students on an abandoned piece of land. Unable to escape the fearsome beast, the two groups of strangers must put aside their differences and come together to fight off the extinct, ferocious monster whilst battling for their lives.

The shark is as big as the special effects budget is small. There appeared to be no more than three or four shots of the shark tops and these were repeated endlessly.  You got the shark swimming in the water as seen from below.  You got a distance shot of the shark swimming. You got the shark coming right up to the beach to munch on various characters, none of who were smart enough to figure out that if they didn’t stand in the same exact spot on the beach over and over again, then the giant shark wouldn’t be able to have them for lunch.  I exaggerate but slightly.

One character gets eaten when the shark leaps out of the water to consume everything but her boots and that portion of her legs left in said boots. It jumps over two other characters - this might have been the swimming shot as seen from below shot taken out of the water - and feasts on the murderous thief.  However, we never see how the shark manages to get back into the water since the arc of its leap would have deposited it on land.

It’s not just the special effects. Everything about this movie is terrible. The story, the acting, the directing, the cheesy surprise ending you see coming an ocean away.  It was a lost 79 minutes of my life with only two redeeming qualities.

The nasty art thief woman was hot, the kind of woman I would desire if my life was totally without value and I wanted to surrender to misery and death.  The other redeeming quality was this line from a review on IMDB:

Now I have watched 1000's of films over the years and quite a few terrible ones, but this film takes the biscuit in being bad.

I live for the day when I can use the phrase “takes the biscuit” in one of my own reviews.

I thought the library had Shark Attack 3: Megalodon (2002) for me, but what arrived was Megalodon (2002). The former is a notoriously bad movie. The latter was surprisingly well-done.

Megalodon (2002) has the by-now-familiar starting point of deep-sea drilling releasing prehistoric sharks from the underground oceanic caverns where they have survived long past their extinction dates. What puts the movie a few notches above most shark movies is good acting and decent special effects.

Roger Sachs plays Peter Brazier, a hands-on oil corporation CEO who doesn’t come off as the usual dick. He believes what he’s doing is necessary and never appears to be in this for the bottom line and nothing else.  Brazier has invited TV newswoman Christen Giddings (Leighanne Littrell) and her cameraman to the oil rig in the hope they will present both sides of the issue. The crew includes Mark A. Shepard, who has become one of my favorite character actors in recent years. You’ve seen him in Leverage and Supernatural. There is none of the usual shark movie scenery-chewing from the excellent cast. That impressed me.

As for the special effects, the rig, its mini-subs and the deep-sea effects are spiffy keen and even occasionally breathtaking.  While the sharks of various sizes aren’t nearly as spectacular, I found them more believable than the usual shark-movie creatures.

I enjoyed Megalodon. The actors are more memorable than the sharks.  Writers Gary J. Tunnicliffe and Stanley Isaacs gave me characters I could care about. Director Pat Corbitt kept a balance between the people scenes and the terror scenes. This isn’t a movie I’ll watch again, but I’m glad I watched it this time.

Red Water (2003) was the next shark movie I watched.  The made-for-TV film was shown on TBS and was, at the time, one of the highest-rated movies in the network’s history. The movie stars Lou Diamond Phillips and Kristy Swanson, who I always enjoy in horror/monster movies like this one. The usual oil rig is a small one exploring possible oil reserves on a small river. Phillips’ character is a former turned fisherman and Swanson is his environmental scientist ex-wife.  The monster is a freshwater bull shark who the locals believe is a spirit guardian of nature. A hungry spirit guardian.

The B-plot involves thugs looking for stolen money dumped into the river.  Rapper Coolio plays one of the thugs and his performance is so bad that you can’t wait for the shark to eat him.

The movie is uneven, but Phillips, Swanson and Rob Boltin (playing a local friend of Phillips) are good in it. While I can’t speak to their accuracy, the local culture scenes were interesting and well-designed. It’s a good enough film to watch once, but it’s not good enough or bad enough for repeat viewing.

Shark Attack 3: Megalodon proved difficult to track down.  None of the 100 Cleveland area libraries affiliated with the Medina County libraries had a copy of it. It wasn’t available on Amazon or eBay for anything close to a reasonable price. But track it down I did and I’ll be writing about it tomorrow. See you then.

Posted by Tony Isabella at 1:13 AM