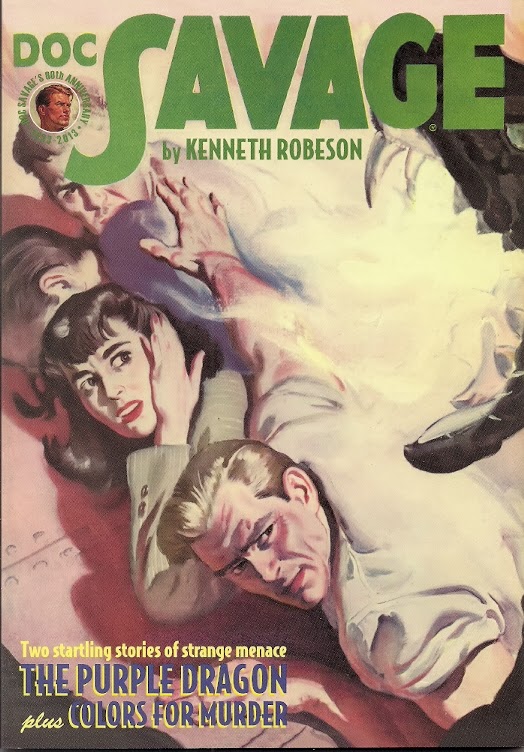 The Purple Dragon was written by Harold A. Davis and Lester Dent as “Kenneth Robeson.” It first saw print in the September 1940 issue of Doc Savage Magazine. From the back cover:

Graduates of Doc Savage’s Crime College revert to their earlier evil ways, leading the Man of Bronze into a deadly confrontation with an uncanny trickster and The Purple Dragon.

Written by Deck, Colors for Murder is from the June 1946 edition of Doc Savage Magazine. From the back cover:

A failed murder attempt and a gorgeous damsel set Doc, Monk and Ham on the trail of an evil mastermind.

Besides the usual informative historical essays by Will Murray and publisher Tollin, the volume also features “Journey into Oblivion,” a Doc Savage radio script written by Edward Gruskin.  The show was originally broadcast March 3, 1943 over WMCA.

As with other Sanctum Books editions - The Avenger, The Shadow and others - these Doc Savage double novels are entertaining journeys into the heroic fiction of the pulp era.  They’re wonderfully made books and I regularly despair I might never get around to reading all of them.  But what I can and will do is let you know about the new releases as they appear.  More Sanctum Books news is on the way.