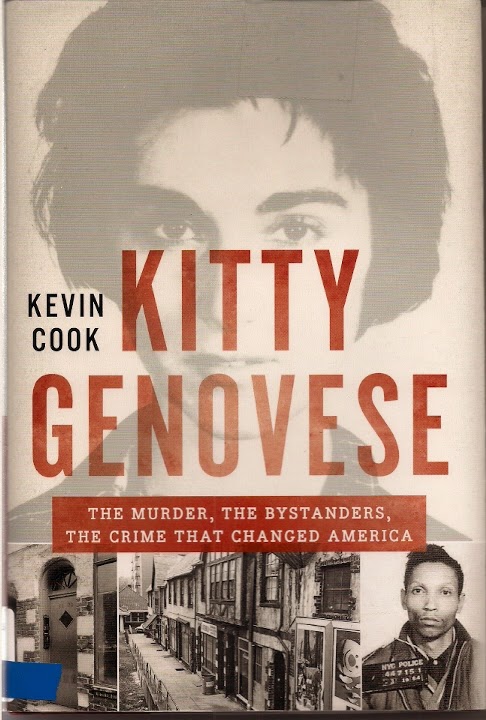 Kitty Genovese, brutally murdered in her Kew Gardens neighborhood in Queens on March 13, 1964, has been in my head since I first read Harlan Ellison’s “The Whimper of Whipped Dogs” in the early 1970s. The story of three dozen plus of Genovese’s neighbors watching her die in supplication to an obscene god born from our modern times is horrifying...and so it has stayed with me. It is with no little shame that I realize and confess that I, too, watched Genovese die in the sense that I never looked beyond either the Ellison story or the murder that inspired it. I never knew who Genovese really was. Until now.

Kevin Cook’s Kitty Genovese: The Murder, the Bystanders, the Crime That Changed America [W.W. Norton and Company; $25.95] introduced me to Genovese in the fullness of her life and the world in which she lived that life for such a tragically short time. He questions the urban legend aspects of her story and her death and reveals a more complete truth to those events.  It is a powerful book that compels the turning of its pages to see what comes next.

Here is the Kitty Genovese that leaves her parents to pursue a life of her own. She was a vibrant gay woman at a time when that would be considered an actual crime. Indeed, even the prosecutor seeking justice for Genovese kept that information out of the trial with Kitty’s lover maintaining the lie that they were but roommates and nothing more.

Here is Winston Moseley, her remorseless killer, currently serving the longest sentence in New York history because an appeals court vacated his death sentence.  Moseley is actually more terrifying in reality than in Ellison’s award-winning story.

Here are the neighbors, perhaps not all the uncaring monsters that the media and urban legend would have them be. Alongside them, the vagaries of chance that could have saved Genovese on that terrible terrible night.

Cook cannot be lauded enough for his investigative work, his keen eye for detail, his determination for telling the entire story and his skill in telling it so well. I am awed by his craft and so very grateful that, after all these years, I can better grasp how tragic Kitty Genovese’s death was. She remains in my head, but now I see her more clearly.

Posted by Tony Isabella at 6:13 AM