THE AVENGER #12: THE WILDER CURSE 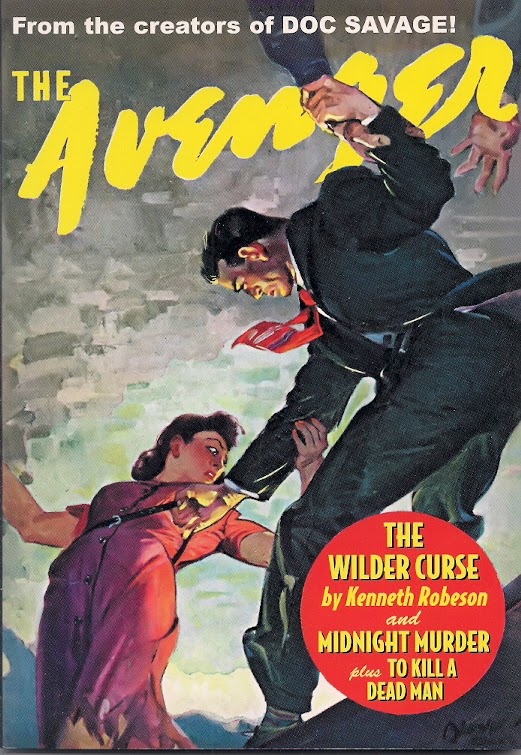 From my pal Anthony Tollin’s Sanctum Books comes The Avenger #12: The Wilder Curse & Midnight Murder [$14.95]. This is the final book in the series, reprinting the last two Avenger novels written by Paul Ernst as Kenneth Robeson.  The adventures of The Avenger and Justice, Inc. would continue for a time in shorter form in Clues Detective Stories.

The Wilder Curse was originally published in the July 1942 issue of The Avenger. From the back cover:

Midnight Murder was first published in the September 1942 issue of The Avenger. From the back cover:

A deadly plane crash sets Dick Benson on the trail of the incredible new invention behind Midnight Murder.

The book also includes “To Kill a Dead Man,” the final Avenger pulp tale by Emile Tepperman. It was originally published in August 1944 issue of The Shadow.

Will Murray is on hand with historical essays discussing the end of The Avenger and that final Tepperman story.

As with the other Sanctum Books series - Doc Savage, The Shadow and others - The Avenger double novels were entertaining journeys into the heroic fiction of the pulp era.  They’re wonderfully made books and I regularly despair I might never get around to reading all of them.  But what I can do is let you know about the new releases as they appear.  More Sanctum Books news is on the way.

Posted by Tony Isabella at 6:51 PM