AS NOT SEEN ON TELEVISION 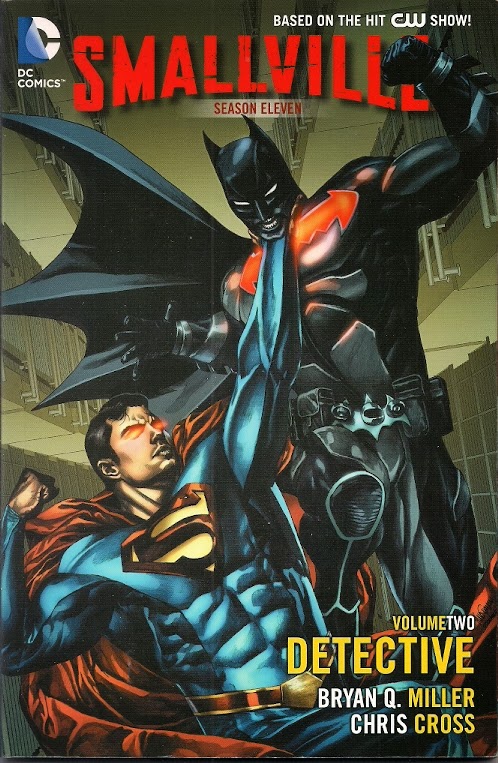 I bailed on Smallville around the fifth or sixth season.  I don’t remember why I stopped watching the show - my daughter Kelly kept watching it for most of its run - but I’m betting it had something to do with too much series mythology.  Without shame, I tell you I am a “monster of the week” viewer.  Far more often than not, when a show gets too wrapped up in its own back stories and mysteries, I take a walk.  I did tune in for the episodes featuring the Legion of Super-Heroes and the Justice Society and thought they were okay just not good enough to win me back to Smallville.

Superman - in any form - doesn’t require a lot of back story.  The important parts of his origin can and have been told in a couple of comic-book pages. Yet, just as too many modern comic books stretch out a story way too long, so have TV series adopted that style of storytelling. I yawn in boredom.

Considering the above rant, what the heck was I doing reading and  enjoying Smallville Season Eleven Volume Two: Detective [$14.99] by Bryan Q. Miller with art by Chris Cross, Jamal Igle, Jorge Jimenez and others? I guess it comes down to the comic book being closer to my own storytelling sensibilities than was the TV series, which, as I recently learned, Miller also worked on.

In his scripts, Miller gives us enough background on the characters without drowning the stories with that background.  I find most of the dialogue in DC’s “New 52" comics to be unbearably cluncky and overblown, it reads far more smoothly here.  The plots progress as a decent pace. The action doesn’t overwhelm the character scenes. The art and visual storytelling are first-rate and not buried under the computer coloring.  It’s a readable and entertaining super-hero series. It’s not going to win any awards, but it doesn’t have to win awards for me to like it. I’m just delighted to have a Superman (and Batman) comic book I can read without shaking my head at its lack of quality or throwing it across the room in anger at how lousy or wrong-headed it is.

It shouldn’t be that hard to write good Superman and Batman comics. The present-day DC Entertainment just make it look hard. I sigh in soul-crushing disappointment.

The X-Files was another TV show that I liked better when it dealt with a “monster of the week” and not the tedious “alien incursion” mythology.  However, I stuck with X-Files right through to the end and even through the movies.  I even kept watching when Fox Mulder [David Duchovny] was abducted and missing from the show for a bunch of episodes. Of course, that was partially due to the crush I had on Dana Scully (Gillian Anderson).

The unfortunately short-lived Topps Comics produced some excellent issues. I was slightly involved with those issues.  I put together the X-Files (and Xena) letters pages for several months.  I really  liked working for Topps.

DC did some X-Files comics as well, but I don’t recall ever reading those. Are they worth seeking out?

This brings us to IDW’s The X-Files Season 10 [$3.99 per issue], an ongoing comic-book series picking up some time after the conclusion of the TV series.  I’ve read the first eight issues of the series. I’m enjoying it, some issues more than others.

The first five issues are written by Joe Harris from a story by him and X-Files creator Chris Carter. It’s a mythology story and lost some points for me because of that.  But Harris and artist Michael Walsh had the characters “sounding” and looking right, so the book earned points for that. I was also thrilled by how many supporting characters appeared in these issues, some of which came as a real surprise.  All in all, good stuff.

Issues #6 and #7 featured a “monster of the week” story by Harris and artist Elena Casagrande with Silvia Califano.  The two issues had the return of a monster from the TV series. The art nailed the likenesses and had more movement than Walsh’s issues. Issue #8 has the mythology and the return of Walsh.

As I said, I’m enjoying The X-Files.  If I have any complaints on the series, it’s that I wish there was a more equal balance between the “monster of the week” stories and the mythology stories...and that I wish the art had more life to it. The series could use more dynamic storytelling. If you’re a X-Files fan, you’ll want to check out this series.

I already watch too much TV, so I was a little alarmed to realize how many new or in development shows caught my interest when I read about them in the March 10-23 TV Guide.  DC Entertainment’s Arrow has been entertaining, so I’ll give Gotham (Batman origins tale), Constantine, iZombie and The Flash a few episodes each in the hope I’ll enjoy them as well.

When my friend Roger Price put on a couple of comics conventions in New Orleans, I was a guest and part of the crew.  I loved the city and have wanted to visit it again.  I have enjoyed the handful of cop shows based on the city, so, even though I don’t watch the two existing NCIS shows, I’ll watch NCIS: New Orleans for at least two or three episodes. Besides having its setting going for it, the new NCIS also stars Scott Bakula. It could work for me.

Other coming shows which I’ll sample would include what TV Guide is calling “a new cyberthemed CSI” and the CW’s Supernatural: Tribes. I’m leery of the latter. While my daughter and I are still watching and enjoying Supernatural, we both think it’s probably reached the end of its run. A spinoff strikes me as pushing it.

Jamie Lee Curtis, also known as “She Who Must Be Adored”, stars in Only Human, described as a “medical soap.” As much as I’ve enjoyed Curtis’ previous performances and as many impure thoughts as I’ve had about her, I don’t know if even Curtis can sell me on a medical drama. Yes, I watch her Activia commercials, but a weekly hour-long show...I’m not sure I’m ready for that level of commitment.

One more. This Sunday, ABC debuts Resurrection, a show about loved ones returning from the grave and not in a zombie kind of way. The promos have effectively tugged at my heartstrings while showcasing the wonderful Kurtwood Smith and Francis Fisher.  I am sufficiently intrigued and will record/watch the opening episode.

Posted by Tony Isabella at 3:33 AM