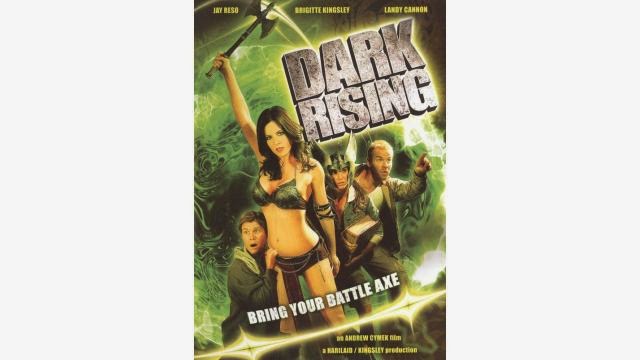 I’ve been in a movie mode of late. I usually watch one movie every night and sometimes go for a double feature if Sainted Wife Barb is out. My Thursday double feature was Dark Rising: Bring Your Battle Axe [2007] and The Family [2013].

Dark Rising: Bring Your Battle Axe was a recommendation from one of my Facebook friends, but I can’t recall which one. Whoever you are, you have my thanks. This is a fun movie and, apparently, the first of a series of TV shows and movies starring Summer Vale [played by Brigitte Kingsley]. Here’s the IMDB summary:

A weekend camping trip turns into a frantic fight against the supernatural when an ancient demon and a fearsome female warrior bring their eternal battle into the present day.

Landy Cannon plays Jason, who is desperately trying to rekindle his romance with his high-school sweetheart, not realizing that she is gay. He and his best friend Ricky [Jason Reso} go on the trip with ex-girlfriend Jasmine [Vanessa James], her lover Marlane [Haley Shannon] and their friend Renee [Julia Schneider]. The three women are playing at witchcraft and manage to open a portal which brings the demon and Summer Vale to our world.

Summer Vale was taken away from her father as a young girl, taken to that harsh world and trained to fight demons. There’s also some shadowy, not entirely warm-and-fuzzy secret government agency that trains warriors and fights demon.  However, the agency doesn’t play a major role in the movie until the cliff-hanging ending.  That’s all you need to know of the story.

The acting performances are decent throughout with proving Kingsley especially entertaining. Though the comedy often gets dark, mixing humor with the action and the scary works for this movie. The fight scenes are serviceable, the demon costume not so much.

I liked this movie enough that I didn’t mind the cliff-hanger. I’ve requested the second movie from my library. Unfortunately, there’s a 12-episode TV series that comes between the first movie and the second. My library doesn’t have it and I haven’t been able to find it for sale. I’ll continue to search.

Dark Rising: Bring Your Battle Axe is 92 minutes of “not half bad” and worth seeing.

The Family, according to Wikipedia, is an “English-language French action crime comedy film.” It’s directed by Luc Besson, best known for the Taken and Transporter movies. He co-wrote the screenplay with Michael Caleo and the whole thing is based on a book by Tonino Benacquista. The film has action. It has crime. But the comedy is of a thoroughly dark nature.  The IMDB summary:

The Manzoni family, a notorious mafia clan, is relocated to Normandy, France under the witness protection program, where fitting in soon becomes challenging as their old habits die hard.

There are wonderful performances in this movie: Robert De Niro as the gangster turned informer who still indulges in the occasional murder with little provocation; Michelle Pfeiffer as his wife who blows up the occasional store when the management is rude to her; Dianna Agron as their lovely and violent daughter; John D'Leo As their Machiavellian son; and Tommy Lee Jones as the CIA agent who must keep this functional but frankly hideous family safe from the brutal killers seeking the $20 million bounty for killing De Niro and his family. This is a terrific movie with great acting, solid writing and plenty of thrilling moments. But it’s also a movie that left me feeling like I could throw up a little in my mouth.

What makes the movie more than a sick and twisted work is the last scene. In the aftermath of an assassination attempt that has left dead bodies and debris all over a sleepy French village, De Niro’s driving his family to the next hiding place where they will live. He thinks the experience has brought them closer together.  But the camera that pans across their faces reveals a different scenario. This is a family irreparably damaged by De Niro’s world. They will never be fit to exist with normal human beings. They are tortured monsters, a truth the arrogant De Niro can’t begin to comprehend. The last scene will stay with me.

The Family is worth watching once. I’m glad I watched it. But I’ll never watch it again.

I watched The World’s End [2013] a few months back, but didn’t get around to reviewing it. The movie is still surprisingly fresh in my head, but here’s the IMDB summary:

Five friends who reunite in an attempt to top their epic pub crawl from 20 years earlier unwittingly become humankind's only hope for survival.

Simon Pegg is Gary King, the man-child leader of the group.  He’s always worth watching. There are many other wonderful actors giving wonderful performances in this movie, but I’m trying to keep this review as briefly as possible.

So...think Invasion of the Body Snatchers with considerably more pleasant alien invaders. The secret plot unfolds. The old friends figure out something’s wrong. The invaders tell them more because they probably wouldn’t have figured it all out on their own. Things get dicey. Things don’t work out for some of the characters we come to care about. Things get upended for mankind. It’s a funny weird movie not unlike other movies written by Pegg and Edgar Wright and directed by Wright.

By most standards, This Is the End [2013] was both a critical and a commercial success. By my standards, it was a largely unpleasant 106 minutes.  The IMDB summary:

While attending a party at James Franco's house, Seth Rogen, Jay Baruchel and many other celebrities are faced with the apocalypse.

While the movie managed some impressive special effects sequences, my overwhelming impression of it was that the directors, writers and stars were all insufferably pleased with how amazingly clever and edgy they were being.  Which meant they weren’t being either.

I wouldn’t recommend this movie. I would never watched it again and I wish I had those 106 minutes of my life back.

I watched We’re the Millers [2013] in January during the Cleveland-to-Los Angeles flight. I suspect the film, which normally runs 110 minutes, was edited somewhat for showing on the plane. Here’s the IMDB summary:

A veteran pot dealer creates a fake family as part of his plan to move a huge shipment of weed into the U.S. from Mexico.

This was a perfectly enjoyable movie with solid performances from its very cool cast: Jennifer Aniston, Jason Sudeikis, Emma Roberts, Will Poulter, Nick Offerman, Kathryn Hahn and Ed Helms. Despite the criminal nature of the enterprise, Sudeikis and his family-for-hire are likeable sorts. DEA agent Offerman, his wife Hahn and daughter Molly Quinn are equally likeable and a little odd. Helms’ character is a major asshat and Helms plays him well. Where I found the cast of This Is the End repulsive, this movie’s cast were entertaining and even welcoming.

You’ve all seen enough movies that it does not require any spoiler warning when I tell you the fake family becomes something more by the end of the film. I’ve long believed the best, most supportive families are the ones we create for ourselves.

I enjoyed We’re the Millers. It helped this nervous flyer survive yet another flight. It’s not an award-winning movie, but I’d watch it again and recommend it to you as well.

Posted by Tony Isabella at 6:34 AM