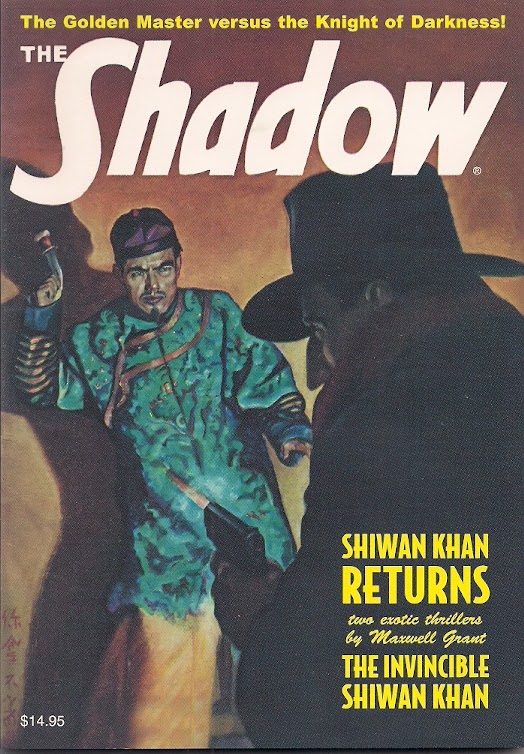 Sanctum Books, the publishing company owned and operated by my pal Anthony Tollin, has been releasing new books faster than I’ve been able to keep up with them. But I’m going to keep trying to tell you about these fine publications.

The Shadow #80: Shiwan Khan Returns and The Invincible Shiwan Khan [$14.95] features two classic novels by Walter B. Gibson, writing as Maxwell Grant.  “Shiwan Khan Returns” was originally published in the December 1, 1939 edition of The Shadow Magazine.  It’s the first rematch between The Shadow and the arch-enemy he would battle in an unprecedented five novels.

“The Invincible Shiwan Khan” is from The Shadow Magazine for March 1, 1940 and again pits the Knight of Darkness against the sinister Golden Master.  From the back cover:

The Shadow and Mura Reldon team up to battle the mesmeric menace of The Invincible Shiwan Khan.

Both Shadow novels have illustrations by Edd Cartier.  In addition to the novels, there are four informative historical essays.

In “From Pulp Pages to the Silver Screen,” Ed Hulse writes on the 1994 Shadow movie starring Alec Baldwin and points out those film elements taken from the pulp novels. Will Murray’s “Interlude” discusses the two novels reprinted in this volume.

Editor Tollin’s “Shades of Shiwan Khan” showcases Khan’s comic-book appearances, some of which are wildly different from what was shown in the pulp novels.  He finishes the book with a single-page piece on Gibson.

Posted by Tony Isabella at 5:28 PM