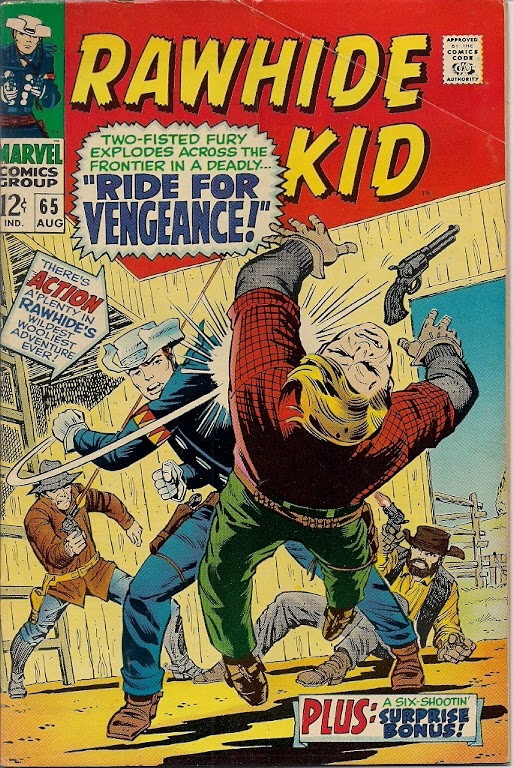 The Rawhide Kid is my favorite western comics character and one of my favorite comics characters period.  Something about the short of stature (but big on courage and fighting skills) Johnny Clay spoke to the short of stature (but big on comics-reading skills) teenage Tony Isabella.  After rereading the Kid’s earliest adventures when Marvel Comics reprinted them in a pair of Marvel Masterworks and an Essential Rawhide Kid volume, I wanted to reacquire every Rawhide Kid comic, reread them and write about them in this bloggy thing of mine. This is the 50th installment of that series.

Penciled by Larry Lieber and inked by Herb Trimpe, the cover of The Rawhide Kid #65 [August 1968] promised two-fisted fury and action a’plenty in Rawhide’s wildest wooliest adventure ever.  Plus a six-shootin’ surprise bonus! However, much as I love the Larry Lieber issues, when it came to wild, he never managed to top the Stan Lee and Jack Kirby story in which the Kid battled a giant living totem pole. But I digress.

Written and penciled by Lieber with inks by John Tartaglione, “Ride for Vengeance!” (17 pages) opens with a shadowy figure calling out the Kid in a secluded figure. In the two-panel title page, Rawhide spins around with his guns drawn...

...only to have them shot out of his hands by the toy gun of young Tim Tanner.  Tim knows Rawhide let him win, but appreciates all the Kid is teaching him. Says our hero:

Just remember that it’s even more important to know when to slap leather than it is how! Boot Hill is full of fast draws who drew at the wrong time, for the wrong reasons.

The lesson ends when Lucy Tanner, Tim’s beautiful sister, summons them to dinner. A flashback sequence explains how Rawhide came to fit this peaceful haven.

Chased by a Kiowa war party, the badly-wounded Rawhide managed to escape and make his way across the desert.  He reachers the Tanner spread, only to collapse in front of Lucy and Tim.  They take him in and get him medical care. They know the Kid is a wanted man, but they take him in.  When he recovers, Rawhide sticks around to help with some of the heavier chores.

Rawhide has rarely known such tranquility. There are clear sparks between him and Lucy, but he bunks in the barn. But the Kid is not the only fast gun with ties to Lucy and Tim.

Brother Matt Tanner never took to farming. He gains a reputation as a gunfighter.  Challenged by the brutish Hank Slade, who forces the issue, Matt has no choice but to kill him. Warned that Slade has a brother and friends who are even worse, the gun-weary Tanner heads for the family spread.

Back at the ranch, Lucy and the Kid are professing their love for one another, though Rawhide reminds her that he is an outlaw with a price on his head. She says:

The law only knows who you are! But I know what you are! If you were truly bad, I couldn’t love you!

The romantic moment is interrupted when Matt Tanner rides up and, seeing the Kid, drops from his horse and fires. The Kid ducks and returns fire, wounding Matt. That’s when Lucky recognizes her long-gone brother.  Awkward.

Meanwhile, Jake Slade has learned about his brother’s death.  Not caring Hank started the fight, Jake and his lowlife friends hit the road to seek revenge on Matt Tanner.

Back at the ranch, tensions between Matt and the Kid are very high. Matt knows the trouble being a top gun can bring.  Rawhide gets the point and, though angry, promises that, if he marries Lucy, he’ll never carry a gun again.

Later, Slade and his goons have found the Tanner spread. They hide their horses and sneak up on the house, catching the Tanner family by surprise. Tim runs out of the house to get the Rawhide Kid, who is fishing elsewhere on the spread.

Slade doesn’t care that the wounded Matt is at a disadvantage in a gunfight, nor is he overly concerned when Rawhide shows up. After all...

There’s four of us and only one of him!

Math is hard.  Slade actually has four goons with him.  Even after Rawhide shoots them down, the Kid thinks to himself...

Three down and only the boss to go.

The cowardly Slade runs into the barn and tries to ambush Rawhide from the hayloft.  But the Kid spots the man’s shadow and disarms him with a well-placed shot.  The brief battle in the hayloft ends with Slade hitting the ground hard. He’ll live, but the Kid don’t reckon he’ll ever bother anyone again.

Matt is ready to welcome Rawhide to the family, but this fight has brought the Kid to his senses. He loves Lucy dearly, but he won’t marry her:

Don’t you see, Lucy...so long as there are Jack Slades on this earth, I can’t put away my irons! And I sure don’t aim to let you share the short, sorry life of a gunslick!

RAWHIDE: Not me, Lucy...us! And I’ll share that memory with you, wherever I am, till the day I die! I swear it!

Matt thinks the Kid might come back someday, but Lucy knows better:

No...I’ll never see him again! Fate sent him to me...but he could never really be mine! He belongs to the untamed land of today and to the western legends of tomorrow!

“GANGWAY, WORLD! MARVEL’S MARCHING ON!” is the banner headline of the issue’s Marvel Bullpen Bulletins page. The top stories announce the jumbo-sized Silver Surfer #1 and Not Brand Echh going jumbo as  well and also has a plug for the still on-sale Spectacular Spider-Man magazine.

Stan Lee uses his “Stan’s Soapbox” to explain why Marvel is adding so many titles and specials.  Basically, it’s because the readers have asked for more and are buying them.  He also promises Marvel will always make these books the best they can.

The Mighty Marvel Checklist has some notable issues. Marvel Super-Heroes #15 has a Medusa story drawn by Gene Colan. In Avengers #54, five villains have joined forces under the command of the Crimson Cowl. Daredevil fights the Jester for the first time. Iron Man has a rematch with the now-more-powerful Unicorn. Captain Marvel slugs it out with the Sub-Mariner.  Nick Fury Agent of Shield #3 has the Steranko classic “Dark Moon Rise, Hell Hound Kill!” It was a great month to be a Marvel fan.

This issue’s surprise bonus is “Gunrunners’ Trail!” (5 pages), an action-packed tale written by Sol Brodsky with art and lettering by the great Bill Everett.  A ranger seeks to help an ambulance as it makes its way through a dangerous part of the territory.  But it’s not really an ambulance.  It’s a wagon full of guns and gunpowder for “the Indians.” By the end of the story, the ranger has routed the “Indians,” captured the gunrunners and is taking the ambulance and his prisoners to headquarters. His closing line:

Two things. Unfortunately, you’re not going to see much sensitivity in the portrayal of native people in Marvel’s western books of this era.  Even when you do, the next story could be back to the norm. It wasn’t right, but it’s how it was.

The “Ridin’ the Trail with Rawhide” letters page has three reader letters and two pieces of art from previous issues.  Bruce Westley of Little Falls, Minnesota suggests the dropping of the short tales to give more room for the main Rawhide Kid story. If necessary, he wouldn’t minding seeing a story continued in the next issue.  He’d also like to see the Kid settle down.

Kenneth Vogel of Ethan, South Dakota thinks he’s spotted an error in a previous issue. He asks, “How did Rawhide slide under a pick when he was pinned to a wall?” The editorial answer is that the Kid didn’t slide under the pick but dodged it.

Rawhide Kid is the favorite western magazine of Andris Sinats from  Albany, California. In reference to a previous story, he says “It’s too bad that the Indians always lose and Custer always wins.” The editorial answer reminds him about that one time...

I hope you’re still enjoying reading these “Rawhide Kid Wednesday” blogs as much as I enjoy writing them. I’ll be back tomorrow with some other stuff.

Posted by Tony Isabella at 3:10 AM