JUMPING INTO THE SHARK 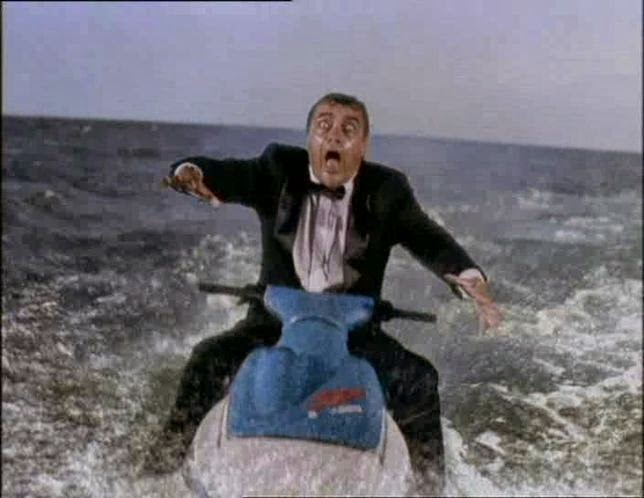 Shark Attack 3: Megalodon was a tough movie to reel in.  My local library is affiliated with Clevenet, an organization encompassing a hundred Cleveland area libraries...and not one of those libraries had a copy.  Going to Amazon and eBay uncovered a few ridiculously expensive copies.  With a little research, I figured out why this movie was so hard to find.

Shark Attack 3 stars a young John Barrowman, he of Doctor Who and Torchwood and Arrow fame, struggling mightily with his part in an incredibly bad movie. However, knowing how passionate Barrowman’s fans are, I figured they had long since bought out every copy that was available on the secondary market.

Then there was the unholy union of Shark Attack 3 and YouTube.  The last half-hour of this movie has so many classically silly scenes that they have become a YouTube sensation with one clip of the enormous shark  attacking a yacht racking up over 40 million views. Whatever copies Barrowman’s fans didn’t snap up were probably sold to folks wanting their own copies of the madness.

That’s my speculation and I’m sticking to it.

YouTube came to my “rescue” because someone posted the entirety of the movie on the online network.  It probably wasn’t even remotely okay for them to do or for me to watch it, but, if I’m arrested by Interpol, I plan on pleading diminished capacity.  You’ve read my blog, so you might well be called on to testify to that.

Shark Attack 3: Megalodon (2002) was straight-to-video.  It feels like two incomplete shark movies mashed into one.  The first movie would be the one about electronic impulses from underwater cables luring a prehistoric shark from its underground lair to eat divers and resort patrons. The CEO of the communications company laying the cables knows about this situation but doesn’t tell anyone. This project will make or break his company.

Ben Carpenter (John Barrowman) works beach security for a resort. He finds a huge shark tooth in a broken cable and posts a picture of it on a shark website.  This attracts the attention of Cataline "Cat" Stone (Jenny McShane) who comes to the resort to see Ben and get the tooth. She doesn’t share her suspicion that the tooth comes from the believed extinct Megalodon.

The best scene in the movie has the shark biting its way into Cat’s boat to put an end to her horrible acting. Instead, she fires a shotgun into the shark’s mouth. This is where the movie takes a very wild turn.

Mama Shark appears. She’s big enough to swallow a boat whole, even if you can see her huge teeth through the transparent boat.  It’s computer-generated images of the cheap kind.

Ben and Cat escape. Everyone working with them dies.  Ben manages to get the beaches closed, but the evil CEO fills a yacht with his potential investors and heads out to sea.

Ben has a friend whose an ex-Navy guy and a former employee of the communications company. He quit when he learned his fellow divers were put into extreme danger without warning. Ex-Navy guy steals a mini-sub from the company and already has explosives and a torpedo. Because you never know when you might need that shit.  The plan is to sabotage the cables so they stop sounding the dinner bell for sharks in general.

Mama Shark goes for the yacht. Right-wing politicians and pundits bitch about class warfare. But I think it’s the invisible jaws of the free market at work.

Rich people jump off the sinking yacht to get eaten. One guy takes a life preserver from his wife/girlfriend/escort and jumps directly into Mama Shark’s mouth. Other rich people are on inflatable life rafts that the shark swallows whole. These are the scenes that got millions of hits on YouTube.

My favorite? The CEO escapes the yacht on a jet-ski.  He looks back at the yacht and grins evilly.  Then he looks ahead ans realizes he is heading into Mama Shark’s mouth.  She’s everywhere. She's like the Sarah Palin of the ocean.

Mama Shark tries to eat the mini-sub. It gets stuck in its mouth. Ben sets the coordinates for the torpedo so it will circle back and hit the mini-sub. He then somehow manages to get out of the mini-sub against all the laws of physics. Mini-sub goes boom and takes Mama Shark with it.

Everybody still alive celebrates that this prehistoric giant is no more. Except, elsewhere, another Megalodon is swimming from under a rocky island. Roll the credits.

Shark Attack 3: Megalodon is a terrible terrible movie. Indeed, it is so terrible that you really need to watch it at least once.  I also think some of the more stupid scenes from the last half-hour can be watched more often. You can find them on YouTube.

Shark Zone (2003) is the direct-to-video fourth movie in the Shark Attack franchise, though the only real connection is footage from the earlier movies.  You can see the surfers who died in the second movie die again in this one.

This movie leaves me numb. It’s the usual sharks coming to feast on people during the big celebration that the resort town depends on. The hero is another beach security guy who lost his father and an entire diving party to sharks living around a sunken ship full of treasure.  This despite those divers having the uncanny ability to communicate underwater despite those breathing tubes in the mouths. Their telepathy could not save them, nor could their color-changing wet suits.

The “B” plot involves a Russian tycoon who wants the hero to lead him to the sunken treasure ship.  When his money doesn’t convince  the hero, the Russian kidnaps the hero’s son.  This would not have happened when Reagan was president.

Dean Cochran plays the hero and he’s not bad. Alan Austin plays the mayor of the town and, in flashback, the hero’s dad.  He’s pretty good and not a total dick like the mayor of Amity.  Everyone else in the cast starts at so-so and works their way down.

The best and only really frightening scene in the movie is a dream sequence in which the hero sees his wife killed by a shark who has chewed its way into the bottom of their boat.

The only surprise is...the sharks pretty much win.  Sure, the hero kills enough of them to save himself and his son, but a great many other people get eaten and no one gets the treasure.  I suspect the sharks will open up an off-shore account for the money they get for the treasure. They will probably not become job-creators.

I recommend passing on Shark Zone. There’s just not enough meat in the movie - not even of the bologna variety - to make watching it anything other than a waste of 91 minutes.

I may be done with shark movies until Sharknado 2: The Other One is available. There are a few DVDs I bought cheap, but I might move on to Jaime Lee Curtis slasher films or some of the other B-movies I have acquired in recent months.  As always, I’m open to my bloggy readers’ suggestions as to categories of B-movies or even specific B-movies I should watch. Be kind.

Come back tomorrow for the 50th installment of my rip-roaring, two-fisted “Rawhide Kid Wednesday” series.

Posted by Tony Isabella at 6:56 AM