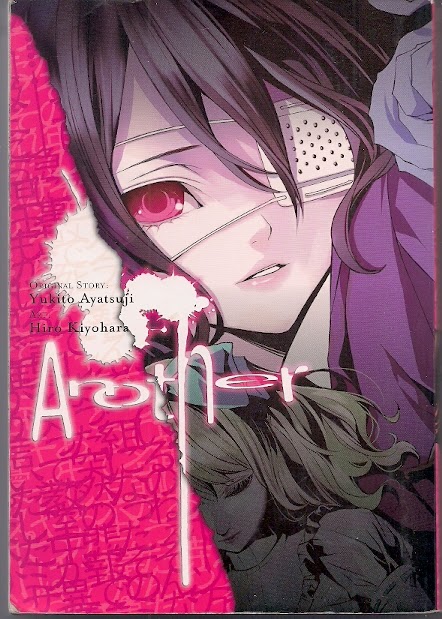 Another [Yen Press; $29.99] is an unsettling manga adapted from the mystery horror novel by Yukito Ayatsuji. Adapted by Hiro Kiyohara, the manga version clocks in at around 700 pages. The novel has also been adapted into a 12-episode anime series and a live-action film.

Fifteen-year-old Koichi Sakakibara, afflicted with a recurring lung ailment, transfers to Yomiyama North Middle School. He’s assigned to third-year class 3 and quickly discovers something is horribly wrong with this class. Every few years, students in the class and people closely related to those students die gruesome, unexpected deaths.  It’s a terrifying curse, one which drives the students and their reachers to equally terrifying attempts to dispel the curse before it claims too many lives.  I don’t want to reveal more about this manga.  Suffice to say, it’s scary stuff and will be scarier if you don’t know what’s coming.

“Teens marked for hideous deaths” seems to be a commonplace concept in American and Japanese entertainment. We have Friday the 13th and other slasher films. Japan has Battle Royale and its counterparts. I’m beginning to think there’s actual psychology driving comics and movies like these. The young readers and viewers who flock to them have a justifiable fear of the adult world.  The adults who create them seem to consider the fictitious victims to be expendable.  I can see a real-life parallel with cowardly blowhards like Bill Kristol, a man positively eager to send young Americans into the wars he would never personally fight in.

I find works like Another to be disturbing, but confess they keep me reading.  In my infernal optimism, I keep hoping the youngsters will escape death and that the slaughter will somehow make sense at the end of the story. That is rarely does is perhaps the scariest thing about these chilling tales.

Recommended, but not for the faint of heart.

I am now current (more or less) on DC’s Superman titles and it was tough slogging.  These comic books just aren’t very good and I’ve little faith that DC will be able to turn that around unless they put someone in charge who has a clue who Clark Kent and Superman are and an understanding of what elements of the mythos are essential to the character.  The closest any of these Superman titles came to be entertaining for me were some issues of Action Comics written by Greg Pak.

Adventures of Superman is hit or miss, but it’s the best Superman title being published today. Marc Guggenheim’s “Tears for Krypton”  in issue #8 was readable but its emotional ending doesn’t hit the mark.  Christos Gage’s “Flowers for Bizarro” in issue #9 was much more satisfying as it paid tribute to “Flowers for Algernon,” the classic science fiction story by Daniel Keyes.

Superman and Wonder Woman #1-4 were just plain awkward.  Though he is one of the better DC writers, Charles Soule couldn’t convince me this relationship is real.  It’s like the players were acting out some magical fanboy’s fantasy, which, given the way DC seems to be run these days, is possibly a more accurate assessment than I would like. Quick. Trick these editors and executives into saying their names backwards. Then maybe we could get at least 90 days of good DC super-hero comics.

I read the first two issues of All-New X-Factor by Peter David and Carmine DiGiandomenico.  I’m not quite on board with this new take.  I very much like the notion of a benevolent corporation that hires super-heroes to help people and, in the process, give said company great publicity. If the corporation turns out to be not benevolent, then there’s nothing special about the idea.

I’m not quite feeling the characters, but I expect that will change after I’ve read a few more issues. David rarely disappoints on the characterization front.

The art and costume designs leave me cold. DiGiandomenico’s art and storytelling is uneven.  The costumes are boring.

I can’t recommend this title yet.  But I do plan to keep reading it to see where it goes.  Given the work David did on the previous X-Factor series, I’m confident about this series.

IDW’s Classic Popeye is a favorite of mine. Each issue reprints a vintage Popeye comic book by the great Bud Sagendorf, a cartoonist who was as funny and imaginative as Popeye creator E.C. Segar. It takes great will power not to binge-read these 52-page treasures. I try to spread them out a bit.

Classic Popeye #10 [$3.99] was my most recent issue. The lead tale has Popeye traveling to Spinachova to rescue the country’s citizens from a sleeping epidemic. Other stories have Olive going on one of her periodic “Popeye shouldn’t hit anyone” crusades, the one-eyed sailor trying to prevent a man taking up a career as a pirate and Swee’pea trying to protect his apple snack from Wimpy, Sagendorf’s drawings and dialogue flow smoothly through the tales, interrupted only by the laughter of their readers.  These comic books are big fun and I recommend them highly.

Codename Action [Dynamite; $3.99] is a six-issue limited series in which pulp heroes team up with super-spies to battle an enemy that is replacing world leaders with duplicates and heating up the Cold War. Yes, the book is set during the Cold War, though, given what’s going on in Russia and the Ukraine, it almost could have been set in today’s world.

The line-up of spies and pulp heroes includes Operator 5, Operative 1001, Black Venus, the Green Hornet, Kato and others with the story loosely based around the Captain Action figure/universe.  If I am unclear on some details, it’s because writer Chris Roberson, good as he is and he is pretty damn good, doesn’t do a really good job introducing the characters and concepts.

Digression. Exposition isn’t the enemy of comics storytelling. Even a caption naming a character and giving a few words of background is useful to the new and even returning reader.  They don’t take us out of the story anymore than those corner ads on television take us out of the programs we’re watching. End digression.

Jonathan Lau is the artist of the series.  His visual storytelling is uneven. Some pages are very nice, others are more design-y than useful.  Some figures are stiff. There was one shot of a scientist that made me wonder if the character had artificial limbs.  I miss the days when the likes of John Romita and Joe Orlando could guide young artists.

Codename Action is quite readable. It’s not great comics, but I’m interested enough in the characters and concept to keep reading it. Your own interest will probably depend on how much you like these characters and the Cold War setting.

Posted by Tony Isabella at 2:56 AM