LITTLE RICE DUCK ON THE TRUMPET 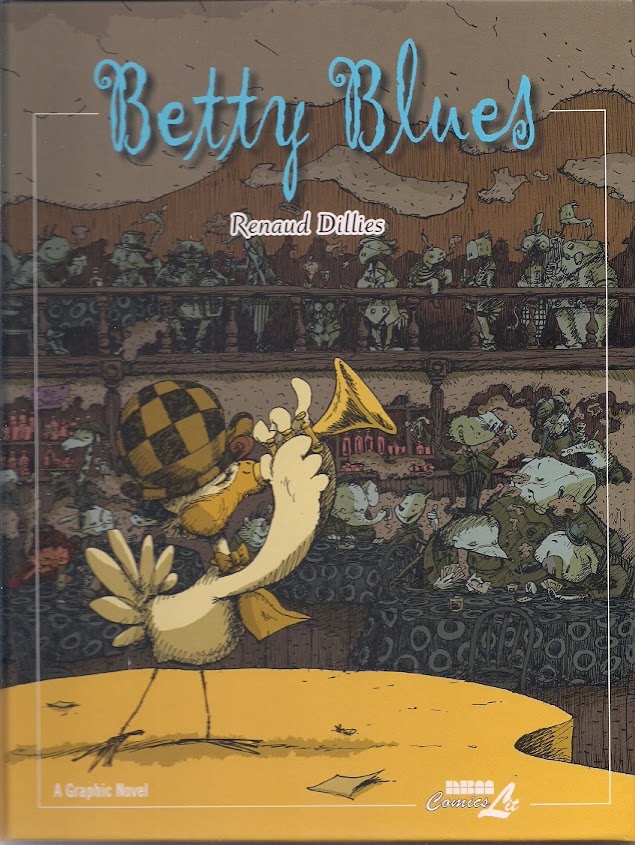 Betty Blues by Renaud Dillies [NBM/ComicsLit; $18.99] has haunted me since I first read it last year.  A jazz tragedy in comics form, it’s the tale of Little Rice Duck, a great trumpet player with two great loves: the music he makes in nightclubs and his beautiful girlfriend Betty.

Betty feels she’s playing second-fiddle to Little Rice’s horn. In a drunken moment, she makes a terrible mistake and becomes trophy wife to a wealthy tycoon who will never see her as more than just another of his lovely possessions.  The betrayal shatters Little’s world and he abandons his other great love.

In 88 exquisitely drawn and colored pages that pull the reader into Little’s world, Dillies sends Betty and Little off into different journeys.  She longs for her former lover’s passion, even if it means sharing that passion with the trumpet.  He hits the road and experiences an often cruel reality.  It’s a story about the life-changing mistakes we desperately wish we could take back.

Betty Blues is a classic.  If I ever wrote a sequel to 1000 Comic Books You Must Read, this graphic novel would be one of the first works selected for inclusion.  If you’ve never read it, you should. Once you read it, you’ll be as haunted by it as I am.

Cage of Eden Volume 5 by Yoshinobu Yamada [Kodansha; $10.99] is the fifth in what appears to be a 20-volume series.  The crash of their airplane leaves middle schooler Akira Sengoku, his classmates, crew members and other passengers stranded on a remote island inhabited by dangerous extinct creatures.  Naturally, some of the survivors turn out to be just as dangerous.

Young kids in jeopardy is a thing in Japanese manga.  Often these kids are the prey of deranged adults and even their peers.  As in other series of this type, the hero is one of the last students who would expect to become the group’s heroic leader.

Cage of Eden didn’t bowl me over with its first volume, but there was something that had me coming back for the next one.  Yamada’s use of prehistoric creatures that are far from the norm for comics and movies was a big initial factor.  After subsequent volumes, I found myself a full-fledged member of Team Akira, impressed by how the class clown had become the best hope the survivors have if they want to remain survivors.  Despite a few really bad eggs, these are pretty decent kids.  Unfortunately, I’ve read enough horror novels and watched enough horror movies that I know not of all them will make it to the final volume.

Yamada keeps the story movie and, when there’s action, it grabs the reader.  Though there is some typical-for-manga similarities in how characters look, Yamada keeps the main players distinct.

Cage of Eden isn’t a classic, but it’s entertaining enough to keep me reading.

I almost never read comic-book reviews.  But after reading and very much enjoying Deadly Class #1 by Rick Remender, Wes Craig and Lee Loughridge [Image; $3.50], I was stumped on an opening line for my review of the issue.  This has never happened to me before.  Sure, sometimes my opening lines are terrible, but at least there will be something in my brain.  Not this time.

I did some surfing and came across Benjamin Bailey’s review of the issue at IGN.  I chuckled out loud at Bailey’s opening line...and realized I couldn’t top it.  What he wrote was:

Remember the 80s? Those simpler times when homeless punk rock kids would be recruited by secret assassin organizations located in San Francisco!

Now that we have that out of the way...Remender and Craig took me right into 1987, the start of a several-year-long period that would change my life in many ways and not all of them for the better.  It was a time of struggle for me as it is for Marcus, the 14-year-old protagonist of Deadly Class.  His parents are killed by a suicidal schizophrenic who lands on them at the conclusion of her leap from a bridge. He ends up in a boys home and, escaping from that home, ends up homeless.

Bad things can happen to homeless kids and, very quickly, Marcus is running for his life with no decent odds of his surviving his teen years. Until he’s invited to enroll in Kings Dominion School of the Deadly Arts, a school for assassins.  There were times in the late 1980s and early 1990s when, if given the opportunity, I would have enrolled in such an institution.

This comic book flows across the eyes.  The writing is sharp. The art moves. The Loughridge coloring splashes into your brain as it enhances the shifting moods of the story.  The lettering and design work of Rus Wooton ties it all together.  This is easily one of the most impressive first issues I’ve seen. The next issue can’t come soon often for me.

Deadly Class. Get it on the start of something great.

Saddle up, all you cowboys and cowgirls. I’ll be back tomorrow with my first new "Rawhide Kid Wednesday" in way too long a spell.  It’s wild-and-wooly western thrills in the mighty Marvel manner when the Kid finds himself in the middle of the “Duel of the Desperadoes!”

Posted by Tony Isabella at 6:22 AM