THREE MOVIES AND A NOVEL 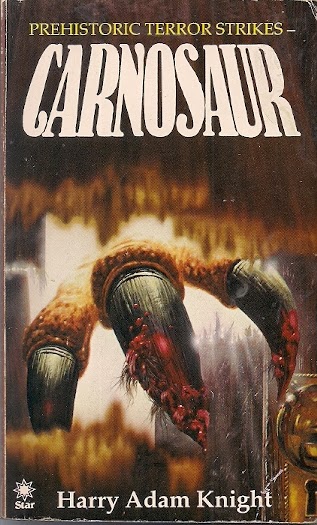 Carnosaur was published in 1984 by Star Books.  The dinosaur horror novel was written by Australian John Brosnan, using  the pseudonym Harry Adam Knight. This novel predates Michael Crichton's Jurassic Park by six years. It wasn’t published in the United States until 1989, still a year ahead of the Crichton novel that was turned into a blockbuster movie and movie franchise. Brosnan’s book would spawn three Roger Corman movies of much lesser renown: Carnosaur [1993], Carnosaur 2 [1995] and Carnosaur 3: Primal Species [1996]. We will get to those films in a bit.

Brosnan’s novel is an entertaining pulp thriller filled with people who make incredibly bad choices.  Its lead protagonist is reporter David Pascal. He works for a small-town newspaper which regularly kowtows to the rich and the powerful, most notably Darren Penward, a lord with a private zoo. Penward pretty much owns Warchester, a rural village in England.

That private zoo is far more than it seems. Penward is making his own dinosaurs, part of a larger plan to release them back into the world so that they can establish their rightful dominance over said world. That whole meteor wiping out the dinosaurs was totes unfair in Penward’s twisted mind.  The novel starts when some of Penward’s creatures escape and assert their rightful dominance over a number of locals by killing and eating them. Jolly good show.

Penward’s special forces capture the critters and, in a town where Penward is lord, easily cover up what really happen.  The blame is put on Penward’s Siberian tiger, but a survivor leads Pascal to dig deeper into this private zoo thing. To get information and access to the zoo, Pascal enters into an affair with the nymphomaniac Lady Penward. It’s one of those bad choices I mentioned.

Brosnan’s novel is much better than the Corman movies.  That should not be seen as damning with faint praise.  Though the rural English setting is somewhat confining, the creatures roam farther than in the movies.  The book also has many more prehistoric creatures than the movies, which stick to the usual rubber raptors and a solitary T-Rex. Wikipedia lists Altispinax, Brachiosaurus, Deinonychus, Dilophosaurus, Megalosaurus, Plesiosaurus, Scolosaurus, Tarbosaurus and Tyrannosaurus. Including all these dinosaurs would have used up Corman’s entire company budget for several years.

Brosnan’s book also has the advantage of having space to spend some time with the victims before they go on the menu.  In the movies, many of the entrees are generic scientists, soldiers and terrorists. It’s the shame the actual novel has never been filmed by somebody with the budget to do it right.

Carnosaur is long out of print and only available via the secondary markets. Though most of the copies I saw at Amazon and eBay weren’t cheap, there are some reasonably-priced copies available.  I think the novel is worth tracking down.  I enjoyed it enough to seek out and buy Slimer, another Brosnan/Knight novel.

There’s only one real commonality between the novel and this movie.  While the novel has its crazy English lord who wanted to give the dinosaurs a chance to reclaim the planet, the movie has a deranged scientist - played with scenery-chewing aplomb by Diane Ladd - who wants the dinosaurs to destroy mankind and restore the world to a more natural state.

The movie is set in the American Southwest. Though Brosnan wrote a first draft of the screenplay, pretty much nothing of what he wrote was in the finished film and he was credited only for the “original story.” The movie had a budget of $1 million, which allowed for a mere two rubber dinosaurs: Deinonychus and Tyrannosaurus.

Ladd works for an evil corporation.  Besides growing dinosaurs in chickens, she spreads a virus which causes pregnant women to give birth to dinosaurs and die.  Though the movie indicates the virus is spreading uncontrollably, it’s never mentioned in either of the two sequels.

I watched this movie so you would not have to waste 83 minutes of your life. Don’t let my sacrifice be in vain.

Government malfeasance is key to Carnosaur 2 [1995]. It takes place in a secret government facility which was formerly a uranium mine, research lab and refinery.  It’s currently being used for dumping radioactive waste, for top-secret experiments and a secret storage facility for cloned dinosaurs.  What could possibly go wrong with a set-up like that?

If you answered “everything,” you are correct.  There’s a possible meltdown and leaking radioactive wastes.  There’s unfrozen hungry dinosaurs...which explains all the blood and body parts scattered around the place. The helicopter which brought a repair crew to the site - and its pilot - get attacked by a velociraptor and explodes, stranding the team. They are what the dinosaurs call a happy meal.

The facility has to be blowed up real good to prevent the meltdown. The crew would be considered collateral damage even if they somehow  manage to not get their arms ripped off and their delicious bowels disemboweled.  A rescue chopper arrives just in time for one of its soldiers to get his head bit off...and for the rest of the crew to watch the battle between a forklift and a T-Rex mostly taken from the first movie. T-Rex falls down an elevator shaft.  A couple of survivors are rescued. Fox News pundits decry how President Obama has allowed strategic dinosaur reserves to fall to dangerously low levels. No wonder Putin doesn’t take Obama seriously.

According to Wikipedia, which I’m sure is based in a state allowing legal recreational marijuana, Carnosaur 2 has become a cult classic because of its campy special effects and use of footage from the first film and dinosaur sounds from Jurassic Park.

According to me, I sacrificed another 83 minutes of my decreasing  lifespan for you.  There should be some sort of Purple Heart-like  medel for movie reviewers like me.

Carnosaur 3: Primal Species [1996] was a direct-to-video release. Near as I can tell, it used the same hand puppets and rubber dinosaur suits we saw in the first two films.  I’m guessing it was filmed at whatever locations and sets were readily available.

Stupid Obama government puts a truckload of frozen dinosaurs on the road so they can be hijacked by terrorists seeking uranium.  These terrorists kill the entire military detail accompanying the truck. They take the truck to an abandoned warehouse facility with enough unclaimed cargo to obscure the terrible dinosaur effects and then they get eaten. The hungry dinosaurs leave behind only those rubber body parts available from other movies.  I swear I recognize some of these parts from earlier Carnosaur flicks.

The government sends a special forces team into the warehouse and does not tell them what they are really supposed to recover. Some of them get eaten.  A female scientists explains how it’s really, really, pretty please really important not to kill these dinosaurs because we can learn so damned much from them.  She doesn’t change her mind until she realizes she is on the menu, too.  Fortunately,
the government sends reenforcements to make sure no dinosaur goes hungry. If you ask me, that’s socialism.

The dinosaurs are bunking down on a cargo ship. The scientist and soldiers board the ship and take it out to sea.  When they discover the T-Rex has laid a great many eggs, they abandon ship and call in an air strike to sink the boat.

Just kidding. They decide to blow up the boat themselves, planting explosives in the lowest levels of the ship to make sure they have quality time with the hungry dinosaurs.  Only the scientist and the commander of the squad get off the boat alive.  They will probably make idiot babies together.

Where is Sharktopus when you need him?

If you’re keeping track, I just saved you another 85 minutes for a grand total of four hours and 11 minutes.

The only sort of good thing about Carnosaur 3 came during the end credits:

“The American Dinosaur Association monitored all dinosaur action. Scenes depicting violence to dinosaurs were simulated. No dinosaur was harmed or mistreated during the making of this film."

The worst thing about Carnosaur 3? According to Wikipedia, it was followed by two “unofficial sequels.”

Raptor [2001] re-used footage from the Carnosaur movies. So did The Eden Formula [2006], a low-budget film made for the SyFy Channel. The nightmare continues.

I’ll be back mid-week with a new Rawhide Kid Wednesday.