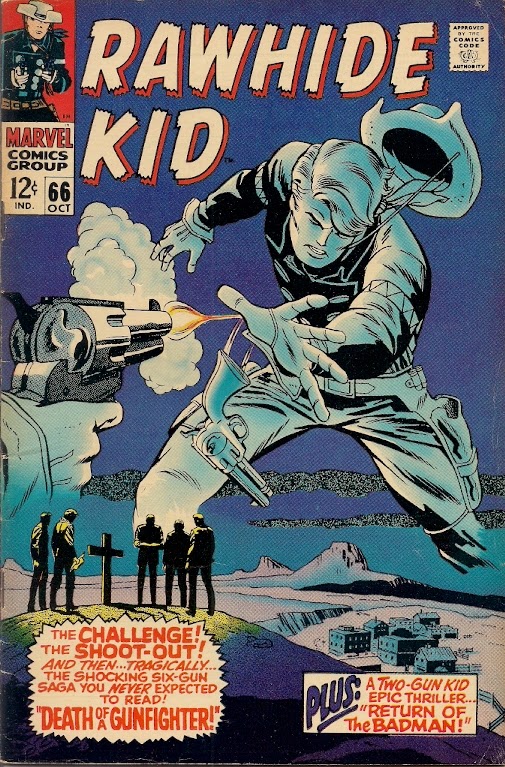 The Rawhide Kid is my favorite western comics character and one of my favorite comics characters period.  Something about the short of stature (but big on courage and fighting skills) Johnny Clay spoke to the short of stature (but big on comics-reading skills) teenage Tony Isabella.  After rereading the Kid’s earliest adventures when Marvel Comics reprinted them in a pair of Marvel Masterworks and an Essential Rawhide Kid volume, I wanted to reacquire every Rawhide Kid comic, reread them and write about them in this bloggy thing of mine. This is the 51st installment of that series.

There are three stories in The Rawhide Kid #66 [October 1968] with Marvel burning off a story intended for the recently-cancelled Two-Gun Kid #93. That title would be revived in 1970, but would feature  reprints.

The Grand Comics Database credits the cover of this issue to Larry Lieber (pencils) and Vince Colletta (inks), but I’m not sure about that inking attribution. Outside of a few lines on the large hands, I’m not seeing any signs of Colletta here. The sharp black areas on the cover bring Frank Giacoia to mind. I’m not sure what to make of the use of zip-a-tone on the firing fun. I’m not an art expert, but I think someone who is an art expert should take a closer look at this cover before we accept Colletta as its inker.

Writer/penciler Lieber delivers one of his best Rawhide Kid yarns in “Death of a Gunfighter!” (9 pages). The title page opens with a Boot Hill burial:

A grim, barren burial ground reserved for society’s outcasts - men who lived by the gun, fast and briefly - men such as he who is now being laid to rest...

One of the five men present says the deceased was “nothing but a ruthless outlaw” while another says, “Mebbe so...but I suspicion he wasn’t guilty of half the bad things that folks claimed!'

As the men leave Boot Hill, the conversation continues...

Whether he was, or wasn’t, is a moot point now!

Not exactly! The Kid is dead, but his legend will go on!

Yeh, there’s be books and songs and tall tales for years to come!

A newcomer to town asks an old man who was just buried. Amazed to learn it was the infamous Rawhide Kid, the stranger accepts the old man’s offer to tell him the whole story.

The old man tells of a heartsick gunfighter, weary of being called out wherever he goes and putting too many men into the ground.  It happened again when the Rawhide Kid rode into this town.  A bully by the name of Vance Fargo forced a gunfight.

This time, Rawhide decided to lose the fight. He twisted his body just enough so Fargo would merely nick his arm. The Kid thought he was free of his curse, that now the gunmen looking for a rep would challenge someone other than him.

What the Rawhide Kid didn’t count on was that Fargo would become an even worse bully, stealing at will and tormenting the townspeople. The Kid couldn’t stomach that and challenged Fargo to a repeat of their earlier gunfight.

The old man concludes his story:

Then they slapped leather and Fargo turned out to be the faster gun after all! He dropped the kid with one shot!

He left town after the shoot-out! He figgered he’s about picked this place clean and headed for greener pastures.

With this great story to tell the folks back home, the stranger walks away and doesn’t notice the seated figure half-hidden in the shadows. It’s the Rawhide Kid and he asks the old man if he thinks the stranger believed him.

What really happened in that second gunfight is that Rawhide shot the gun out of Fargo’s hand and two-punched the bully down to the ground.  The town was grateful.

Yuh were safer not being a top gun! Yet when the chips were down, yuh came to our rescue!

Now it’s our turn to help you, Kid! We’ll tell folks that Fargo killed you! We’ll even stage a fake funeral! It’s take the gunnies off your back - for awhile anyway.

I love this story.  I also love John Tartaglione’s inking.  He was always one of Lieber’s best inkers.

The Two-Gun Kid stars in “Return of the Bad Man!” by Denny O’Neil with art by Ogden Whitney (8 pages). The GCD opines the story was originally intended for Two Gun Kid #93, which would have been dated May 1968 if it hadn’t been cancelled.

Two-Gun captures a wanted man. Because the wanted man has equally dangerous outlaw brothers, the sheriff wants to get the prisoner to  the district marshall pronto. The bad guys kidnap the father of the lawman and offer an exchange. Two-Gun impersonates the outlaw and, well, things go south for the outlaws quickly.

There’s not much to this story. O’Neil’s writing is uneven.  He’s breathlessly huckster-like in the captions and his dialogue usually seems forced. Whitney’s art is more consistent and excellent more often than not. I would have liked to see Whitney draw more stories and in many different genres for Marvel. He was a talented artist and storyteller.

The headline of the Marvel Bullpen Bulletins page promised “Items of Incredible Import to Illuminate Your Interest, Invigorate Your Imagination and Intoxicate Your ID!”...and, speaking as someone who first read it in 1968, I believe it delivered on that promise and then some.

Marvel received a great plug in TV Guide. The penciler/inker team of Gene Colan and Tom Palmer joined forces on Dr. Strange, just as George Tuska and Johnny Craig were doing on Iron Man.  “And, when Dr, Doom finally stars in his own strip, wait until you see who the artists are!”  There’s also an address which Marvel readers can use to write to lonely soldiers.

Marvel boasts about its Fantastic Four and Spider-Man cartoons and the toys and games being produced by Kenner Toys and other outfits. There’s a mention of gag mag Groovy and a warm welcome for newest Marvel writer Arnold Drake, “the loveable king-size leprechaun with a fabulous flair for biting satire and crafty characterization.”

“Stan’s Soapbox” talks about the diversity of opinion among Marvel writers and artists.  Stan wrote the piece in answer to questions about where the company stands on political issues. His answer was that there wasn’t any one Bullpen opinion on anything...which was still true when I worked for Marvel in the 1970s.

“The Mighty Marvel Checklist” lists two dozen titles. The Phantom Eagle makes his debut in Marvel Super-Heroes #16. The Avengers go back in time to learn the true fate of Bucky Barnes and, in their second annual, battle the original Avengers in a world they never made! The Hulk meets the Inhumans in his first special. Sub-Mariner slugs it out with Tiger Shark. Nick Fury, Agent of Shield #5 has a Steranko classic, “Whatever Happened to Scorpio?” Dormammu invades  Earth in Dr. Strange #173. The Sgt. Fury special has the Howlers in action at the Battle of the Bulge. Tales of Asgard #1 is a giant-sized special reprinting stories by Stan Lee and Jack Kirby.  As I have stated before, this was a terrific time to be a Marvel reader.

The third and final story in this issue is “The Double Cross” by Bill Everett. Although Everett is only credited with the art on the story’s splash panel, the GCD lists him as the writer and letterer of this fine-page tale.

I found this story troublesome. A sheriff is in on the kidnaping of a wealthy rancher’s daughter. However, when he sees how beautiful and sweet the young woman is, he has a change of heart.  Though he takes the random to the kidnapers, he doesn’t give it to them and rescues the girl.  His co-conspirators flee into the night. Here’s where things get dicey for me.

The sheriff confesses to the rancher and his daughter.  He plans to resign as the town lawman. But the rancher is willing to look the other way. He wants the sheriff to track down those “polecats” and bring them in. The story ends there.

Is the rancher really that forgiving? From my cynical vantage point of 2014, I’m think the rancher realizes that having the sheriff in his pocket can only be good for his business. That’s the only way the story’s ending makes sense to me.

The “Ridin’ the Trail with Rawhide” letters page has four letters and a panel of art from a previous issue.  Mike Driebe writes from Arlington, Virginia to request a story telling how the Rawhide Kid became an outlaw.  He also requests the Kid get married and clear his name.

Brown, Mac and McDuffee of Upper Heyford, England want to know how the villain Drako reached the ground safely after he fell from a cliff.  They think the Rawhide Kid stories are great and they also like Vince Colletta’s inking.

Bobby Finkel of North Hollywood, California complains that Rawhide always wins.  He thinks the Kid losing “once in a blue mood” would spice things up. The unknown Marvel staffer answering Finkel says Rawhide never knuckles down to defeat.

Finally, Dick Richards of Brooklyn, New York loves the super-hero and the western comics published by Marvel. He credits Marvel with keeping western comics alive in the United States.  Apparently, he wrote the letter before Marvel canceled, however temporarily, Kid Colt Outlaw and Two Gun Kid and never noticed Charlton and other companies were also publishing western comics.

Come back next week for another thrilling installment of “Rawhide Kid Wednesday.”

Come back tomorrow for other stuff.

Posted by Tony Isabella at 1:12 AM