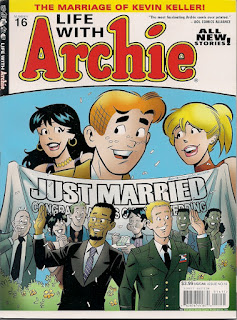 ﻿"We stand by Life with Archie #16. As I’ve said before, Riverdale
is a safe, welcoming place that does not judge anyone. It’s an
idealized version of America that will hopefully become reality
someday. We’re sorry the American Family Association/One Million
Moms feels so negatively about our product, but they have every
right to their opinion, just like we have the right to stand by
ours. Kevin Keller will forever be a part of Riverdale, and he will
live a happy, long life free of prejudice, hate and narrow-minded
people.”

John Goldwater, co-CEO of Archie Comics, released that statement in
response to One Million Moms targeting Toys ‘R’ Us for selling Life
With Archie in its stores.  It is one of the very few times in the
past forty years that a comics industry executive has made me feel
proud to be even a small part of that industry.

One Million Moms, whose membership doesn’t come close to its name,
is part of the American Family Association.  The AFA is a virulent,
extreme right-wing organization known for spreading misinformation.
The Southern Poverty Law Center considers it a hate group and it’s
an assessment with which I agree.

When I first saw this story on Heidi MacDonald’s The Beat, I posted
this comment:

I’ve watched my kids and their friends grow from pre-school and
kindergarten to high school and college. One of the things that
gives me hope in these dark days of continued right-wing bigotry is
how most of these kids have overcome the prejudices of their
parents and embraced diversity in their peers. The bigots will,
eventually, be relegated to the dustbin of history. Our kids are
better than we are and that gives me hope.

I posted the comment in a few other places as well.  Naturally, it
wasn’t long before intolerant crybabies began to bitch about being
called bigots and make their tiresome false equivalency statements
about having a right to their noxious opinions.  Which, of course,
absolutely no one was challenging.

Bigots, you’ve the right to cling to even the most ill-informed and
offensive opinions.  Heck, you have the right not to marry someone
of the same sex and to not allow same-sex couples to marry in your
churches.  No one questions that.  Revel in your ignorance.  It’s
your right.

However, you shouldn’t have the right to tell fellow citizens that
they can’t enjoy the same marriage rights you enjoy.  Such rights
should not be subject to a vote.  They are among those inalienable
rights you claim to hold dear and so often don’t.