CITIZEN TONY: THE RIGHT TO VOTE 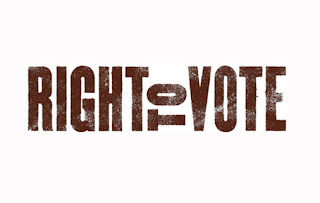 Donald Trump has implied that, if he loses the presidential race,  it’s because the election was rigged. If he does lose, as I hope he does, I think it’ll be because he’s Donald Trump, with all the many  negatives that implies. But he’s not entirely incorrect saying the election is rigged. Just not in the ways he or his supporters are likely to understand, much less accept.

The right to vote is perhaps the most important right we Americans have. To our discredit, it was not a right granted to all Americans citizens for many years. Even today, it is a right under attack on multiple fronts.

Let’s start with redistricting, a process that has been misused by both parties but which the Republicans have mastered to a degree never before seen. The winners of state elections get to draw the districts for the next elections. They draw them to benefit their future candidates, creating elongated districts of odd shapes that make no logical sense other than to insure the victories of their candidates. This is why in recent years, though more citizens vote for Democrats, the Republicans command so many state legislatures, command state houses and have achieved such dominating control of the House of Representatives. It’s because the districts are drawn that way - rigged that way - to insure that success.

Redistricting should never be in the hands of politicians. To me, it would be like baseball/football/basketball players being their own umpires and referees. Imagine a batter being the one who gets to determine if a pitch was a ball or a strike. Imagine that pass receiver being the judge of whether or not he caught the football in bounds. While the games might be more interesting on some level, they would be become meaningless. Just like huge parts of our state and local governments.

Redistricting should be a matter for non-partisan geographers and mathematicians. You divide a state into however many districts of “x” number of people. If your state has a million residents and ten districts, then each district would have a hundred thousand people in it. Simple math.

The geographers would then divide those ten districts into shapes as close to rectangles as humanly possible. No snake-like districts that slither across ridiculously long lengths. No districts curling around other districts like a python crushing its prey. Just simple rectangles and squares.

In the past, there have been arguments districts should be drawn to reflect the people who live in them. That rural folks have much different needs than city folks. That farmers and manufacturers and construction workers and white collar workers are so different from one another they need their own state and federal representatives. If that ever made sense - and maybe it did when our country was in its infancy - it doesn’t make sense in 2016.

We are all Americans. The issues which face us concern all of us. We have more in common than not, despite the fear-mongering rants of those who benefit from our divisions. For our nation to be truly representative of its people, redistricting must be taken away from those who profit from it. It should never again be a political perk of winning an election.

Our right to vote is challenged and threatened on other fronts as well. I’ll be continuing this discussion in the next installment of “Citizen Tony.”

I’ll be back tomorrow with different stuff.

Posted by Tony Isabella at 8:35 AM