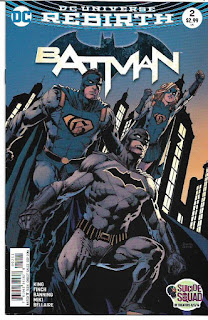 If you’ve been reading my weekly “Tony’s Tips” column at Tales of Wonder, you know I’ve been enjoying the DC Universe Rebirth titles. This despite not really understanding what’s happening to the DCU. My friends at DC Comics claim it’s not a reboot. My best guess at this time is that it’s a merging of pre-Flashpoint continuity with post-New 52 continuity with whatever the heck the editors and the writers and the artists think will make for entertaining stories. It’s the Wild West out there!

As a post-continuity comics reader and writer, I like the idea that characters need not be bound by what has gone before. Sometimes the best way to deal with dumb stuff that worked its way into previous issues is to ignore it completely. Whatever old comics you loved, they’re still there. Read and enjoy them. But, to expect 50-year-old stories to be the law for today’s comics is damaging to the new comics. Here’s my pocket guide to continuity:

Get the characters right. Establish the core values of the heroes and villains and supporting cast members you’re writing. Stick to those core values but, otherwise, tell stories that resonate with our modern times. That Jimmy Olsen, for example, is brave and loyal and good at what he does, is more core to his character than being dumped on by Lucy Lane, turning into human porcupines and wearing a bowtie and a plaid suit jacket. His core values don’t change if he’s tall, dark and handsome on TV. I love those goofy Jimmy Olsen comic books as much as anybody, but I don’t want new Jimmy stories in that mold.

Here are some quick thoughts on recent Rebirth titles...

Titans: Rebirth #1 by Dan Abnett with Brett Booth and Norm Rapmund [$2.99] brings together the original and now older Teen Titans as Wally West returns from the Speed Force and jogs their memories of their past friendship. It’s cool seeing the old gang back together. The return of Lilith, who never quite fit comfortably with the team in the previous continuities, seems a much better fit in this one.The “mysterious menace who tried to keep us apart” bit has not yet engaged me, but the Titans are so happy to be together once again that I’ll stick around to see what happens.

Aquaman #2 by Abnett with Scot Eaton and Wayne Faucher [$2.99] has a mostly satisfying conclusion to the latest conflict between our title hero and Black Manta. Good back story, good resolution and a political challenge for Aquaman and Atlantis. All fine stuff. Not so fine is that yet another villain who can’t remain in custody for more than a few pages before we get an escape and clumsy foreshadow of future villainy. Come on. Good stories have beginnings, middles and ends. Cliffhangers like this one are just weak tea.

I’m less enthusiastic but still intrigued by Batman #2, Green Arrow #2, Hal Jordan and the Green Lantern Corps Rebirth #1 and Justice League: Rebirth #2 [$2.99 each]. While I delight in a Batman who is far more mentally stable than we’ve seen in recent years, it seems odd to have him mentoring the super-powered Gotham and Gotham Girl in what could be a throwback to his 1960s World’s Finest team-ups with Superman. Still, the last page appearance of a classic villain was sort of cool.

Green Arrow is very grim. The title is adding elements similar to those on the Arrow TV series and it hasn’t been the smoothest of fits. This title needs some work.

The Hal Jordan special offers a great deal of complicated back story and lots of ra-ra-go-team. I need to see more from this title.

The Justice League special is in a similar vein, but centers more about Superman’s place in the League with a new Superman in action. I really like this new Superman from another reality. He’s married to Lois Lane and raising a super-powered son with her. Except for the “imaginary stories” of the 1960s, these are tales we have not seen done with the Man of Steel.

Which probably explains why Superman #2 by Peter J. Tomasi and Patrick Gleason is my favorite of this batch of Rebirth issues. If I get to vote, I vote for this Superman sticking around as THE Superman of the DC Universe. 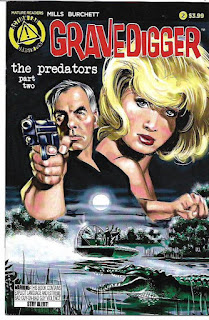 Christopher Mills has produced two different - and very different from each other - comic-book series in recent months. Each series runs three issues.

Gravedigger [$3.99 per issue] is written by Mills with art by the sensational  Rick Burchett. It’s a  noir series starring a career criminal seeking the score that will set him up for life. The obstacles to that plan are two unrelated eff-ups. He’s framed for the murder of a mob boss’ daughter...and he gets brought into an arms heist where there’s not enough fans for all the shit that hits.

These two "Gravedigger" McCrae stories were originality produced for online publication and are printed sideways. Mills writes a hard as nails story and Burchett is equally hard in the visuals. It’s exciting to read these stories, but McCrae’s world is not one you would want to live in. There’s an warning on the covers of all three issues of this series: 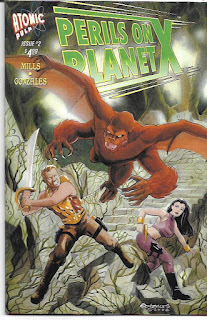 Also from Mills is Perils on Planet X with art by Gene Gonzales and colors by Ian Sokoliwski [Atomic Pulp; $4.99 per issue]. Taking its inspiration from Flash Gordon and John Carter of Mars, Perils is a  fast-paced thriller wherein American astronaut Donovan Hawke gets lost in time and space and ends up on a distant savage planet. Cue the beautiful alien princess, strange creatures, sword-and-blaster action and, of course, daring-do and exciting escapes from, well, a variety of perils.

Perils on Planet X might not cover any new ground in the genre, but the story is solid, the writing and art are energetic, and it’s fun stuff. I think Perils of Planet X does a better “Flash Gordon” than anything Dynamite has published in recent years. So, if you enjoy this kind of space adventure, this series will delight you.

Perils on Planet X was self-published and can ONLY be bought via mail order through IndyPlanet at:

Thar’s all for now. Come back tomorrow for the first installment of a brand-new “bloggy-within-the-bloggy.”

Posted by Tony Isabella at 6:26 AM