THE SHADOW #97: CRIME AT SEVEN OAKS 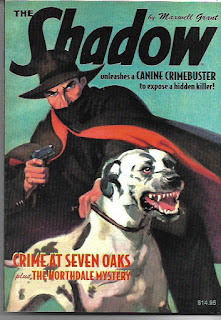 Knowing how much my friend Anthony Tollin loves dogs, I’m amazed it took his Sanctum Books this long to publish The Shadow’s adventure with a Great Dane by the name of Vulcan. The story and the dog were so popular that readers clamored for Vulcan to appear again. Alas, he never did.

The connecting link between the two Shadow novels reprinted in The Shadow #97: Crime at Seven Oaks & The Northdale Mystery [$14.95; June 2015] is the city of Northdale. Though it’s never explicitly stated, the city is probably in New Jersey, not far from our hero’s usually Manhattan haunts, and likely a stand-in for Westfield, New Jersey, the real-life city which other novels say in the home town of Lamont Cranston. One of author Walter B. Gibson’s brothers lived in Westfield.

This volume also includes a historical essay by Will Murray and a  piece by Tollin on the 20,000-year-long centuries-old relationship between man and dog. The latter includes photographs of some of the award-winning dogs Tollin has raised.

Sanctum publishes great books. I recommend them all.