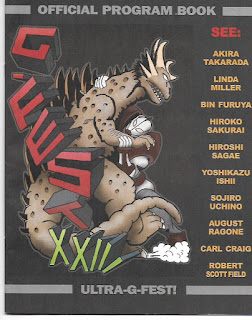 G-Fest XXIII took place Friday through Sunday, July 15-17, at the Crowne Plaza Chicago O’Hare Hotel and Conference Center in Rosemont, Illinois. It was a stunning event on all levels and, kaiju willing, it’s an event I will be returning to in 2017 and every year thereafter.

G-Fest has been my holy grail of conventions since I first learned about it in the pages of promoter/publisher J.D. Lees’ G-Fan magazine. As the pastor of the First Church of Godzilla, which is an actual thing I launched on Facebook, going to G-Fest took on the urgency of a religious pilgrimage.

This year, there were signs and portents I could not ignore. Even beyond my dear friends Martin and Pam Arlt sending me message after message about the convention. Thanks to Pam and her timely message about how fast hotel rooms sell out every year, I actually booked my room in November of 2015. At the time, I figured I could always cancel if money and work got in the way of the trip.

The deal was sealed when Martin asked me to take part in the G-Fest panel programming. Now I had a professional reason to attend this most holy of convocations. Now it was a business expense. More on both the panel programming and my taxes later in this multi-chapter convention report.

My all-growed-up son Eddie also wanted to attend G-Fest. We hit the road for Illinois early Thursday afternoon, knowing we would have to drive through the hellscape that is Indiana. That portion of our journey was even worse than we anticipated.

I don’t hate all of Indiana. I’m quite fond of Indianapolis, which is such a nice city it deserves to be in a better state. Many years ago, we visited friends in Valparaiso, which is as charming a place as its moniker would indicate. However, Indiana as a whole is not a favorite destination of mine. It became more so after the foolish citizens of that state elected bigot and Race Bannon cosplayer Mike Pence as governor and also elected others of his ilk to their state legislatures. I weep for Indiana.

But I wasn’t weeping for Indiana this drive thru. We had to pay way too much ransom - they would call them “tolls” - to escape from the state. There was way too much construction on their turnpike. The length and manner of the countless work sites were nothing short of ridiculous, an observation backed up by my engineer son’s work on like projects. At a couple of ransom payment stations, excuse me, toll booths, there were no actual human beings on hand to take our money. They were allegedly automated toll booths likely designed by sadistic mad scientists who failed to graduate from whatever evil universities they attended.

Indiana may want me - that’s how the song goes - but I sure don’t want it. I think I may have let out a girlish squeak of delight as soon as we hit Illinois.

The Crowne Plaza Chicago O’Hare Hotel and Conference Center was the site of G-Fest and has been for over a decade. It’s easily one of the best convention hotels I’ve stayed in. The staff is friendly, competent and clearly appreciates the convention. As you might know from some of my previous convention reports, that’s not always the case. From the front desk personnel who checked us in to Sergio the bellman (who was so fascinated that I worked in the comics industry and knew Stan Lee that he kept asking questions even after I gave him a nice tip) to the parking lot attendees to every hotel worker we came into contact with during our stay, we felt very welcome. Other hotels should learn from the Crowne Plaza.

Our room was comfortable and spacious. In addition to all the usual amenities, the hotel turned over one of its in-house TV channels to G-Fest. Jeff Horne, who handles media, publicity and social media for the convention, put together a program of movies, TV episodes and documentaries to entertain the G-fans when we were relaxing in our rooms. From 10 am Thursday morning to 8:30 am Monday morning, there was always something cool to watch. Eddie and I saw a number of movies and shows we had never seen before.

G-Fest registration was smooth sailing all the way. We got a bonus thrill when we saw Akira Takarada, the star of the original Gojira and so many other amazing films, get into a taxi outside the Crowne Plaza. I’ll have much more to say about the incredible Takarada as this convention report continues.

The hotel did not lack for dining choices, though the prices were what you would expect from such an exemplary establishment. There was the Chicago Fire Oven, a full service restaurant; On the Fly, which offered fast breakfast pastries, salads and sandwiches; and the inviting Visibility Bar, which had ten beers on tap and shared a menu with the Fire Oven. That first night, Eddie and I had beer and pizza at the Visibility while taking in the obvious excitement of our fellow G-fans. We couldn’t wait for the convention to start.

Martin Arlt and the convention put together a programming schedule that puts much larger events to shame. There were three ballrooms devoted to sessions of one kind or another. There were activities for kids, an ongoing film festival, a model room, an artists alley, video gaming, a special effects and cosplay ballroom, and a dealers room packed with great items from stem to stern. Indeed, there was so much stuff going on at G-Fest that we were glad for the Friday morning orientation session conducted by J.D. Lees and other G-Fest staff members. It was recommended to us and we recommend it to all first-time G-Fest attendees.

My further observation. Your first year attending G-Fest should be considered an orientation session. There is so much going on that I think you need that first year just to figure out what you want to do and see on return visits. I hope to make many such return visits.

Our first day at G-Fest - Friday - started with my realization that I had neglected to bring my notes for the presentation I would be making on Saturday afternoon. Unless Martin Arlt, who had created the slideshow for the presentation, had or could get me a copy of those notes, I would have to wing it come the panel. It's the suspense that gets you.

Since the convention wouldn’t be starting until 11 am, Eddie and I watched Kamen Rider W Forever: A to Z, The Gaia Monsters of Fate. I had never seen an episode of Kamen Rider before, much less this W Forever series. It featured battles between several super-heroes and several super-villains. I’m not sure I understood the episode, but it did make me want to learn more about Kamen Rider. Is there a Japanese version of MAD magazine? Did they ever do Ramen Rider? Just asking.

Our G-Fest badges were pin-on badges. Neither Eddie or I wanted to put holes in our shirts, but my years of going to conventions paid off for us. I always carry lanyards for those occasions when they aren’t provided by the convention. This is one of the most valuable “Tony’s Tips” I can give you, so take it to heart.

The orientation session provided further evidence of how much the hotel and its employees like being the home of G-Fest. A gentleman named Andy, the hotel-s audio-video guy, was at the session. Andy made sure everything was working properly and then stuck around to carry a hand-held microphone to fans who wanted to ask questions. His enthusiasm was a joy to behold.

Later in the weekend, I had a chance to chat with Andy. He knew of my comics work and was glad to meet me. Okay, Andy said “honored,” but that always strikes me as a wee bit too much.  “Honored” should be reserved for when you meet someone like Akira Takarada or Stan Lee or Congressman John Lewis of the best-selling, inspirational  March graphic novel trilogy. I’m a “glad” or a “nice.”

Andy also gave me helpful tips about Chicago’s finest Italian beef restaurants and parking at Wrigley Field. These are topics I will explore later in this multi-part convention report.

Prior to G-Fest, I had asked J.D. Lees to list me as a guest. While I certainly had legitimate business reasons for attending - I have been slowly trying to extend my “brand” to monster movies - I knew guest status would make sure my expenses would be allowable on my 2016 taxes. He graciously complied.

I had no idea how graciously. But, as that’s the kind of tease I like to end a column with, I’ll leave it at that until I continue my G-Fest report on the morrow. See you then.

Posted by Tony Isabella at 8:25 AM