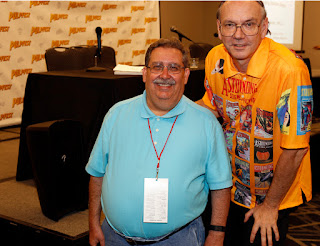 Today we have things I forgot to tell you about my PulpFest weekend because I misplaced the really excellent notes I took during that weekend. I also have reviews of items I acquired at or in relation to the convention. The above photo is me with Lewis Forro, who has graciously allowed me to use his PulpFest photos.

One of the reasons the weekend felt off to me was because my drives to and from PulpFest happened in temperatures that reached 90-plus degrees and in a van whose air conditioning had decided it would be a jolly fun time to stop working. I would open the windows to let hot air pass over me to dry my copious sweat, but it was a fairly miserable two hours each way.

During my previous PulpFest bloggy things, I neglected to elaborate on the health food company and possible pyramid scheme that pushed the PulpFest dealers room from its original location. Visitors to that company’s conferences ran the gamut from the impossibly trim to the not-so-trim. These folks seemed to be very excited to meet one another in an almost cult-like way.

On Saturday, the health food company had some sort of very healthy foods buffet outside the Regency Ballroom. We had to walk past the buffet whenever we went to the PulpFest dealers room. Naturally, it smelled delicious. Several of my fellow PulpFest attendees wondered if we could sneak our way into the buffet line.

As the doors to the Regency Ballroom were wide open, I could hear and see a speaker who might have been the head honcho of the group. He had the demeanor of an Amway zealot, the modern-day equivalent of the snake oil salesmen of olde. He showed a photo of himself and Pope Francis. It was the typical quick photo which that most kind and generous of popes often allows, but the speaker talked like it was some much bigger deal.

There is, indeed, one born every minute. 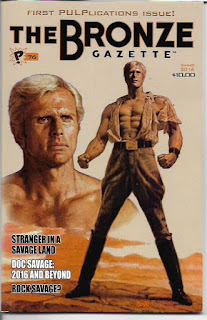 On to my convention booty...
The Bronze Gazette #76 [Pulplications!; $10] was given to me at G-Fest by art director Kez Wilson. The magazine was founded by Howard Wright in 1990. It’s now in the hands of Wilson, editor Chuck Welch and publisher Terry Allen. It’s a handsome, digest size magazine of 60 pages. The cover painting by Bob Larkin shows actor Ron Ely as Doc Savage. It’s a beaut. Between the covers, we get a whole lot of fun stuff.

The esteemed Will Murray is all over the issue, which was fine by me. He writes about his new Doc Savage novels. Duane Spurlock adds a review of a Doc novel by Murray. Jeff Deischer contributes some thoughts on Murray’s first series of Doc novels. Then Murray is back to discuss the prospect of Dwayne Johnson playing the Man of Bronze in a new movie.

Other features? Curt Hardaway writes about attending his first Doc Savage convention. Julian Puga uncovers “The Doc Savage/Frank Buck Connection.” We get the Mayan Alphabet Key used by Doc and his men in many adventures. Wilson interviews Anthony Tollin on completing his reprinting of the original Doc Savage pulp magazine stories. Welch provides a checklist of those reprints and also has a piece on editors changing the titles of stories. Bobb Cotter reviews the Doc Savage Archives published by Dynamite. “Sons of Savage,” which will be an ongoing series on characters inspired by Doc Savage, is basically a too-long plug for Dare Devlin, Supreme Adventurer and not a very enticing plug at that. Publisher Allen contributes news about upcoming Doc Savage books.

The Bronze Gazette is an excellent magazine. I look forward to the next issue and recommend it to all Doc Savage fans. 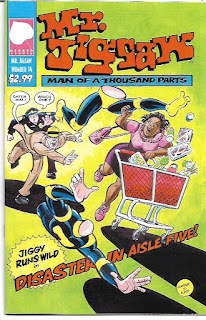 Mr. Jigsaw #14 [Redbud Studio; $2.99] is an unusual adventure for the “Man of a Thousand Parts.” As usual, it was penciled, inked and lettered by Gary Kato. But, for the first time, he also wrote this issue. Wrote it so well that, if it hadn’t been for co-creator Ron Fortier’s inside back cover article, I would have thought Ron was the author. That’s high praise.

If you’ve never read Mr. Jigsaw - if you’ve ignored all of my past recommendations to do so, I have failed you - Charlie Grant is this nice guy super-hero who can split his body into multiple pieces and control them from afar. Over the years, Fortier and Kato have build one of the most appealing casts of supporting characters in comics history. If you knew these people, you would like them. Decent men and women. Salt of the earth.

In this issue, an old enemy kidnaps one of Charlie’s friends and an infant he was babysitting. He lures Charlie into a trap and drugs him. Charlie has no control of his parts. Before long, those parts are running wild with Charlie’s friends carrying his drugged head and trying to reunite it with the rest of him. It’s one of the most hilarious super-hero stories I’ve read.

Look. I care about my bloggy thing readers. I want nothing but the best for you. So, this time, will you please take my recommendation to heart and start reading Mr. Jigsaw? I ask so little. 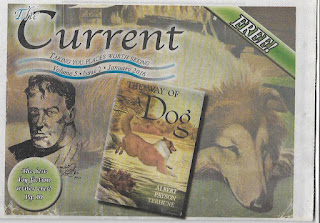 So let me tell you about Rodney Schroeter...

Schroeter is the editor of The Current, a free monthly newspaper  serving the people of Sheboygan, Wisconsin and thereabouts. Before I met him, I had never realized how much I like saying and writing “Sheboygan.” Got a lilt to it.

Schroeter was handing out copies of the June 2016 issue containing a very nice spread on Tony Tollin and Sanctum Books. I have no idea how Sheboygan reacted to an article that likely had little to do with their own interests, but I’m going to guess Schroeter puts together such a fun newspaper that his readers don’t object to his occasional indulgence. Having read or skimmed the 11 issues he gave or sent to me, I’ll go on record saying The Current is one of the best newspapers of this sort I’ve seen...and I tend to pick these things up wherever I travel.

Some of the regular Current features include bite-size comments on classic films shown on Turner Classic Movies, an always fascinating column by naturalist Emily Stone, an occasional column by outdoors guy Mark Walters who often writes about his hunting activities with his daughter and the usual local interest pieces. It’s a nice mix.

In the self-indulgent category...Rodney has written about the Grand Rapids Comic Con, legendary artist James Bama, author Albert Payson Terhune and writing/publishing a comic adapting a Terhune story and drawn by William Messner-Loebs. He's also published articles on other Wisconsin writers and artists. Once or twice, I winced while reading one of Rodney’s more political pieces, but, given my own lack of reluctance about expressing my own views, I can’t get too upset about his writings.

I like The Current. It’s a terrific newspaper and I wish there was something like it in my neck of the woods. You can always see the “current” issue of The Current here. 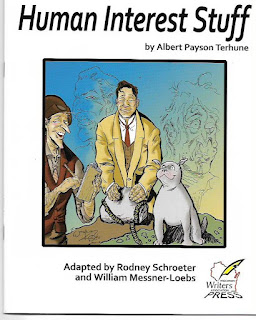 Schroeter also gave me a copy of Human Interest Stuff [Wisconsin Writers Association Press; $4], his and Messner-Loebs’ comic-book adaptation of a Terhune story about a man and the dog that changes his life. The 22-page tale is effectively told. The writing is top-notch and the art brings the characters to life. Schroeter takes a small liberty with the last line of the story, but it’s a liberty that improves the narration. The 36-page, black-and-white magazine also includes Terhune’s original prose story and information on the author and his works. It’s a nice package, much more interesting to me than many of today’s self-published comics with their emphases on autobiographical navel-gazing or popular genre tropes. It is a solidly entertaining comic book and earns my recommendation. If you want to get a copy or copies, go here.

That’s all I have for you on PulpFest and the blessings thereof, at least until I get around to reading the other items I got at that convention. I’m thinking of writing review columns similar to this one, concentrating on comics and books I acquired at other events. In the meantime, come back tomorrow for a Monday of movie madness. You won’t believe the films I’ll be writing about.