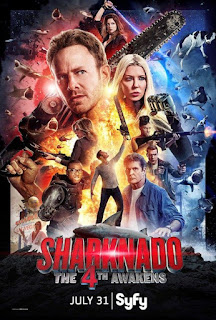 Sharknado: The Fourth Awakens (2016) was the avatar of anticipation for me. With each new advance clip I saw, with each announcement of a cameo appearance, my excitement for the new chapter of the most unlikely movie franchise of all grew. I watched it live on Sunday, July 31, and, if I had to describe it in only a few sentences, my review would be this:

Sharknado: The Fourth Awakens defies all the usual standards for movie-making, movie-watching and movie-reviewing. It has become a thing totally of itself and it is beautiful and wondrous to behold.

However, since I have more than a few sentences...

Sharknado: The Fourth Awakens was directed by Anthony C. Ferrante, who also directed the previous movies in the series. It was written by Thunder Levin, who has also written the previous Sharknado films and has a great first name. Here’s the IMDb summary:

Fin, his family and the cosmos have been blissfully sharknado-free in the five years since the most recent attack, but now sharks and tornadoes are being whipped up in unexpected ways and places.

There’s no way to describe this movie without including spoilers. Although, honestly, even if you know what’s coming, as I did in a few cases, it shouldn’t affect your enjoyment of those exceptional moments.

Fin Shepard [played by Ian Ziering] is living in Kansas with his five-year-old son Gil [Christopher and Nicholas Shone]. It appears wife April [Tara Reid] died at the end of the previous movie. Also seen early on is cousin Gemini [Masiela Lusha]. She is a typically kick-ass Shepard.

Billionaire and science guy Aston Reynolds [Tommy Davidson] keeps the world safe from tornadoes and sharknados with his super-science devices. He even rescued the elder Gil Shepard [David Hasselhoff] from certain doom on the Moon. He can be an asshole and he’s really full of himself. But he is both smart and courageous.
Reynolds is opening a shark-themed hotel in Las Vegas at the same time Fin and Gemini have come to the city for a reunion with Fin’s son Matt [now played by Cody Linley]. Things start going horribly awry. Before the end of the movie, we will see...a sand sharknado, boulder sharknado, oil sharknado, cow sharknado, even a radioactive sharknado.

We will find out that April lives, even though she seems to be an android or robot built by her crazy scientist father [Gary Busey]. She thinks her family is dead. They think she’s dead. I think Crazy Scientist Dad is more than he seems, but that might be an element in the next movie.

Fin and April’s daughter Claudia [Ryan Newman] is also back. She’s  - say with me - a kick-ass Shepard who works for Reynolds and who looks fierce in her business woman suit and heels.

It’s an exciting and silly ride with an ending that’s even wilder than I could have imagined. Quick tease:

Five-year-old with a chain saw.

Those of you who read by review of Sharknado 3: Oh Hell No! about this time last year will recall I was disappointed in some aspects of that movie. I felt the many guest appearances were excessive and overwhelmed the story by drawing attention to themselves. The “Is April dead or alive?” cliffhanger struck me as cheap. And that there was still no explanation for the extraordinary natures of the sharknado and the sharks within it.

The guest appearances were much more smoothly integrated into the movie. They weren’t a distraction. The same could be said for this film’s in jokes.

There is a cliffhanger, but it’s so in keeping with the craziness of the rest of this movie that it has been eager for next summer’s inevitable Sharknado 5.

I still think we need some sort of explanation for the sharknados. Maybe it’s those aliens who were always invading Earth with mind-controlled giant monsters in Godzilla movies.

An actual team-up of Fin Shepard and Lavalantula hero Colton West fighting a menace different than their usual sharknados and flame-breathing giant spiders.

Guest appearances by other Syfy original movies monsters. Because featuring Ann Coulter in the third Sharknado opened up the door to all other monsters.

A good friend of mine proclaimed that the Sharknado series “jumped the shark” with the third movie. He said they had gotten just too silly. I responded that was the whole point.

Sharknado: The Fourth Awakens transcends traditional movie-making logic. It is entirely it’s own thing and it is wondrous. This new addition to the series is the most entertaining Sharknado movie of them all. I can’t wait to see what they do next.

We’ve been reviewing the most recent Syfy shark movies on a scale of zero to five Quints, a system dedicated to Robert Shaw’s doomed character in Jaws. That scale is just too small for the glory and magnificence that is Sharknado: The Fourth Awakens.

Posted by Tony Isabella at 6:16 PM