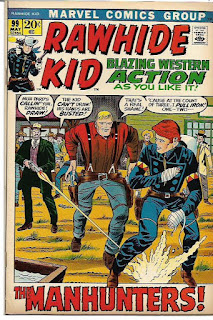 The Rawhide Kid is my favorite western comics character and one of my favorite comics characters period.  Something about the short of stature (but big on courage and fighting skills) Johnny Clay spoke to the short of stature (but big on comics-reading skills) teenage Tony Isabella.  After rereading the Kid’s earliest adventures when Marvel Comics reprinted them in a pair of Marvel Masterworks and an Essential Rawhide Kid volume, I wanted to reacquire every Rawhide Kid comic, reread them and write about them in this bloggy thing of mine. This is the 85th installment in that series.

The Rawhide Kid #99 [May 1972] has a Larry Lieber cover with inks and probably coloring by George Roussos. Inside the issue, Lieber’s “The Manhunters” (14 pages) is written and penciled by Lieber with inks and colors by Roussos.

The Kid rides into a town with no sheriff. Seeing a “clerk wanted” sign in a general store window, he decides to take off his guns and apply for the job. The older couple who own the store like the cut of his jib and hire him.

Meanwhile, in another small town, bounty hunters Colby and Rafe have tracked down the Brogan Brothers. Colby prefers fugitives who are wanted dead or alive because “dead is a lot neater.”

Colby guns down two of the brothers with his sawed-off shotgun. The third brother tries to surrender, but Colby goads him into drawing down on the lightning-fast but otherwise slow Rafe.

The sheriff who pays Colby and Rafe considers them no better than the many fugitives they’ve killed. Colby basically tells the lawman to talk to the hand. He and Rafe have a new bounty to hunt:

I am to nail a young squirt with a fancy rep, who’s been on the loose far too long –- the Rawhide Kid!

The manhunters confront the unarmed Rawhide outside the store where he’s been working. Colby says he’s going to bring the Kid to trial, but makes it pretty clear he’s figuring Rawhide will make a break for it and give him an excuse to gun him down. Either way, dead or alive, he’ll collect the reward on the Kid.

Unarmed or not, Rawhide is going to make Colby work for the price on the Kid’s head. He knocks down the bounty hunter with a single punch, but doesn’t do as well with the brutish Rafe. Rafe squeezes the Kid’s hands, breaking them.

The town doctor says it’s not as bad as it looks. A minor fracture and a few dislocated bones. But the Kid’s hands will take weeks to heal. Colby says Rawhide will need his hands for breaking rocks in the territorial prison:

Less’n, of course, he don’t never make it to prison!
Colby is making no bones - pun intended - about what fate Rawhide will face once they leave town. The Kid makes a break for it using elbows, feet, a chair and his head. He crashes through a window and escapes:

Now to hide out till my hands mend! Then I’ll come back for those hombres--with my hardware!

The Kid’s employers hide him in their own home. They don’t see an outlaw, just "a honest, hard-working clerk who doesn’t deserve to  languish in prison.”

Colby begins to terrorize the townspeople. He and Rafe will level the town a piece at a time until the Kid is turned over to him.

Rawhide knows the despicable Colby will do just that. He asks his employer to tightly strap a gun to his hand. The older man asks how the Kid will squeeze the trigger. The Kid says he won’t.
Tony of 1972 figured it out. Can you?

Colby and Rafe think they’ve won. Whether the Kid is a cripple or not, Colby tells Rafe taking him down with make the former farmer’s rep. Which is what Rafe has been dreaming of:

Rafe dies. Colby fires his shotgun at Rawhide. The Kid rolls under the blast and then reunites Colby with Rafe.

Rawhide sticks around the town for a few weeks until his hands are healed. The store owners tell him he’s welcome to stay in the town. But now that his identity is known, the Kid figures it’s safer for everyone if he pushes on.

“The Manhunters” is a tight and well-told story with a satisfying ending. It would be reprinted seven years later in The Rawhide Kid #151 [May 1979]. With a new cover by Dave Cockrum and Bob Wiacek, that would be the last issue of the series. 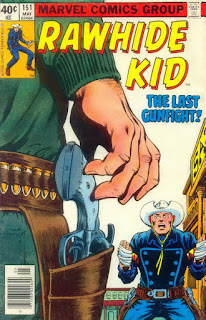 A common gunfight in a lawless Arizona town. Onlooker Crag Noonan steals the gun belt off the body of the loser. Noonan likes how the belt looks on him and thinks that, if the dead man had been just a mite faster, he’d still be wearing these guns.

Ignoring the odd jobs that had been his lot, Noonan practices until his aim is uncanny and his draw is a blur. He quickly makes a rep for himself and gets a job as a hired gun for a ruthless rancher. By the time he has shot and wounded over a dozen men, two marshals figure they have to bring the gunfighter to justice.

The marshals are just average shots, but they are driven by their duty. Noonan, who is not facing a murder charge, says that if they draw on him, he will shoot them before they can reach their guns. One marshal does the math for the gunfighter:

You can only get one of us, Noonan...while you do, the other one will settle you for sure!

Noonan can’t believe the lawmen would let him shoot one of them to bring him in. He tries to process this. The men are not bluffing. They are willing to sacrifice their lives to do their duty. It’s a stand-off, but it’s Noonan who makes the next move:

It was the gunman who broke! He realized the lawmen has something worth dying for...their jobs and their duty. But, in that dramatic split-second, Crag Noonan realized the man who lives by violence is left with nothing...not even the courage to face hopeless odds.

So ends the story of Crag Noonan...he was sentenced to four years in the county prison, and upon his release, he took a job as a cowhand and faded into oblivion...perhaps he had learned, in time, that when the showdown comes, a fast draw alone is never enough!

This is a solid story, creating considerable drama without a great deal of gunplay. The Torres art is evocative, but the reproduction diminishes its impact. I would love to see the original art to this story. I bet it’s amazing.

The Marvel Bullpen Bulletins page is back with the “Stan’s Soapbox” column showing Luke Cage, star of Marvel’s brand-new Hero for Hire title. The copy, both here and in the accompanying “Mighty Marvel Checklist” is pretty generic hype. It’s as if Marvel wasn’t quite sure how to promote the new title.

The lead item on the page touts Marvel getting some play at a comic art exhibition held by the New York Cultural Center and also in an hardcover book called 75 Years of the Comics. The item concentrates on Marvel and doesn’t mention the non-Marvel comic books included in both the exhibition and the book. I’m sensing the Marvel and DC rivalry is heating up.

Another example is an item on the previous year’s Rutland Halloween Parade. Roy Thomas was on a float in a Spider-Man costume when one “excited fan dressed up as a certain red-and-blue-clad superstar published by our Distinguished Competition but jumping up and down ecstatically yelling “Spider-Man! Spider-Man!”

Then as now, both Marvel and DC took plenty of shots at each other. Joining the Bullpen later that year, I was not immune to the silly war of the words. With the wisdom of over four decades in comics, I recognize such trash talk just makes both companies look petty. I love titles published by both Marvel and DC...and by many other companies as well. When it comes to comics and graphic novels, I am an authentic independent...and not one of those pundits whose idea of quality is “anything but Marvel or DC.”

In other Bullpen news...Steve Englehart has joined the Bullpen as a proofreader, penciler, inker, scripter and maybe even letterer.  Native American super-hero Red Wolf is getting his own title with art by Syd Shores. Production chief John Verpoorten is back from a California vacation. Gerry Conway wrote six full-size comic books this month. Publisher (Merry) Martin Goodman was so happy about the reception the fans were giving Marvel’s new issues that he threw an impromptu party “for the whole blamed Bullpen at one of NYC’s swingin’est eateries.”

The Mighty Marvel Checklist includes Galactus and the Silver Surfer in Fantastic Four; a death cult targeting Flash Thompson in Amazing Spider-Man; the legions of Pluto battling the hordes of Hela for the soul of Odin; Hawkeye returning to the Avengers; the Hulk vs. the Creeping Unknown; and much more.

The “Ridin’ the Trail with Rawhide” letters page is a bit shorter to make room for the annual “Statement of Ownership, Management and Circulation.” Reader Trevor Down of Winnipeg really liked Rawhide Kid #95, which took place in...Canada. Go figure.

Robert A. Gillis of Elmsford, New York thinks Rawhide Kid would be even better with a new plotter. He recommends Roy Thomas or Gardner Fox or himself. Cheeky comics fan.

Michael Bryan of Seminole, Florida praises the John Romita-drawn reprints in The Western Kid #1. He wants to see new stories of the Kid drawn by Romita. That’s not in the cards, but Marvel responds with a tease for an all-new Outlaw Kid series. When that new series came around a few months later, it would run for just seven issues. Indeed, I have so little memory of those seven new stories I might have to track them down so I can read them again.

Per the “Statement of Ownership, Management and Circulation.” The Rawhide Kid was selling an average of 193,444 copies per issue at this time. Not many titles can manage that today.

That’s it for this edition of “Rawhide Kid Wednesday.” I’ll be back tomorrow with more stuff.