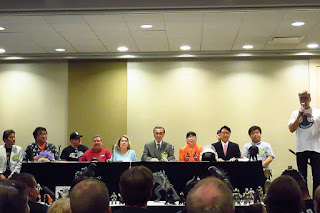 Friday night at G-Fest might be the best night I have ever had at a convention. It started with the opening ceremonies, the official opening of the convention with introductions of the special guests and the committee members who produce G-Fest. Much to my surprise, I was asked to be on the “stage” before a packed audience. Me, the comics guy.

So there I was sitting with Sojiro Uchino, Hiroshi Sagae, August Ragone, Linda Miller, Akira Takarada, Hiroko Sakurai, Bin Furuya, Yoshikazu Ishii and Robert Scott Field. I’m sitting next to Linda Miller, leading lady of King Kong Escapes, and she’s next to Akira Takarada, star of that movie and so many others. Holy cow!

As each guest was introduced, the convention projected a film clip or a photo. I’ve already written about Takarada in an earlier part of this report, but I can add that he can maintain his commanding presence even under hilarious duress. The convention showed a clip of him singing on some Japanese music show. He watched with feigned embarrassment and a smile on his face.

Miller was charming and just so delighted to be there. She didn’t have a long career in movies and TV, but she has devoted fans all over the world and especially at G-Fest. The convention showed her in an episode of My Three Sons.

Field was Android M-11 in Godzilla vs. King Ghidorah. He’s a huge part of G-Fest, appearing year after year to help with translating for the guests. He’s a sweetheart of a human being. I was glad for the few minutes I was able to chat with him.

Ishii is a director and assistant special effects director. He has worked on Ultraman Ginga, Gantz, Daimajin Kanon and Godzilla: Final Wars.

Uchino is a super kaiju-fan in Japan. He had small roles in Ultra-Q and Ultraman, and played one of the Boy Scouts in Gamera vs. Viras. At present, he’s directing the Gotouchi Kaiju project with Sagae. I’ll have more about that project tomorrow.

Furuya was the original Ultraman in the first season of the show. He’s played roles in other Ultraman and kaiju movies and TV shows. He’s also written his autobiography.

Sakurai played perky Akiko Fuji in the first Ultraman series. She was the only female member of the Science Patrol and has appeared in other Ultraman series and movies. A charming presence at this, her first G-Fest, she’s also written three Ultraman-related books.

Sagae is a master maquette sculptor and model maker for movies and toy collectibles. He has also done maquette sculpta, miniature work and production design for some Godzilla, Gamera and other monster movies. A very creative and gracious talent.

I wrote about Ragone in yesterday’s bloggy. If you were wondering, he’s still awesome.

Asked to say a few words, I told the G-Fest fans that, while comic books are my first creative love, giant monster movies were right behind them. I described “meeting” Godzilla on the small black-and-white TV set in the Isabella family living room. Because my father had to get up as early as four in the morning to get things going at the family bakery, I was only allowed to watch these movies if I kept the lights off and the sound down so low that I had to sit right in front of the screen to hear the movies. The price for that might have been the glasses I’ve worn since the third grade, but I think the movies were well worth that cost.

The G-Fest committee members do an outstanding job bringing G-Fest to live every year. I was and remain overwhelmed by how much they provide: fascinating panels, wonderful displays, great activities, and the movies and TV shows we love so much. They are the heads of a terrific G-Fest family. I am honored they accepted me so quickly and so warmly. I used to dream about attending this convention. Now I plan to return every year.

Following the opening ceremonies, Eddie and I drove to Giordano’s for dinner. I used to eat at Giordano’s at least once every time I came to Rosemont for the Chicago Comic-Con. Its deep-dish stuffed pizza is among the best I’ve ever had anywhere. Just walking into the place, even if I don’t have the pizza, reminds me of the great times I’ve had there with comics industry friends, some of whom are no longer with us. I’ll be back there next year and, this time, I will have the pizza. The blessed, glorious pizza. 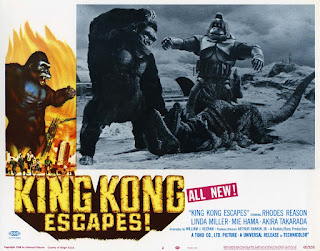 The other big event of the evening was the screening of King Kong Escapes at the magnificent Pickwick Theater in nearby Park Ridge. It’s a fifteen-minute ride to the theater from the hotel. We were impressed by how nice the surrounding neighborhoods were. In fact, we were “we could live here” impressed.

The Pickwick is a classic movie theater. It’s big with the kind of old-fashion decor that used to make going to the movies an event in itself. The seats were some of the most comfortable theater seats I’ve ever experienced. I take pride in only dozing off a couple of times and only briefly. Some of my fellow fans probably spent more time snoozing than they did watching the movie.

Sidebar. There was a street fair a block or so from the Pickwick. Since we were parked near to it and since we had some time before we could enter the Pickwick, Eddie and I walked through it on our way to the theater. It had a huge variety of dining choices and a live band. On another night, had we known about it, we would have eaten there. More points for Park Ridge.

Second sidebar. The Pickwick showed two double feature programs on the day before G-Fest. In the afternoon, it showed Godzilla vs King Ghidorah and Gamera Vs. Viras. In the evening, it showed Yongary, Monster from the Deep and The Green Slime. On Saturday evening, it would host the 50th anniversary tribute to Ultraman. It’s a great venue for the kaiju films we love.

Sitting in the Pickwick, preparing to watch a giant monster movie on a giant screen in a giant theater made me feel like I was a kid again. It was a much larger theater than the Variety Theater I used to go to as a kid growing up on the west side of Cleveland, Ohio, but it brought me right back to those long-ago times.

Takarada and Miller introduced King Kong Escapes. I can’t imagine what it was like for them to be introducing and preparing to watch a movie that they made a half-century ago. Takarada slipped out during the screening, but Miller stayed for the entire movie.

Here’s the Internet Movie Database summary: King Kong is brought in by an evil ruler to dig for precious gems in a mine when the robot MechaKong is unable to do the task. This leads to the machine and the real Kong engaging in a tremendous battle that threatens to level Japan.

The movie was a joint production of Rankin/Bass Productions (U.S.) and the Toho Company (Japan). Mildly based on the King Kong cartoon series then airing on Saturday morning in the States, it sometimes feels like a live-action cartoon. The English language dubbing was  by voice actors known for their work in American cartoons. Among them was the great Paul Frees, who dubbed Hideyo Amamoto’s evil Dr. Who, and Julie Bennett, who did the female voices, including Miller’s cute-as-a-button Lieutenant Susan Watson. Bennett is known for voicing Cindy Bear in various Yogi Bear cartoons and Aunt May in the late 1990s Spider-Man cartoons.

I enjoyed the movie immensely. I’ll probably need to watch it again at home to determine if it was the movie or the setting, but I had a good night at the Pickwick. Rhodes Reason had a tough military scientist persona going for him as Commander Carl Nelson. Mia Hama was cool as Madame Piranha/Madame X, a conflicted, exotically sexy woman doing bad for the sake of her nation. Even with the too-cartoon dubbing of her voice, Miller gave a physical performance I thought was terrific. Her body language and facial expressions carried the role. As for Takarada...he was every bit the handsome hero and love interest. Then and now, as I’ve said earlier in this extended G-Fest report, the man looks like a movie star!

It was a long day at G-Fest. But, even as I fell asleep back at the hotel, I was eager for the next day. Which I’ll tell you about when the bloggy thing returns on the morrow.

Posted by Tony Isabella at 8:17 AM