THE SHADOW #96: THE NORTH WOODS MYSTERY 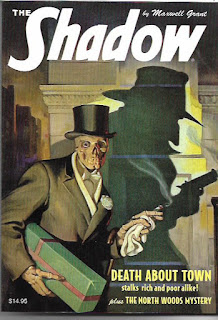 The Shadow 96: The North Woods Mystery & Death About Town [$14.95; May 2015] reprints two pulp thriller milestones by Walter B. Gibson writing as Maxwell Grant. The first novel is set in the Canadian wilderness and the other in the haunts of Manhattan’s high society.

Death About Town comes from The Shadow Magazine for April 15, 1941. The back cover blurb: Serial killings at a posh Gentleman’s Club become even more baffling when the murderers themselves are slaughtered.

The front cover art for this Sanctum publication was painted by the remarkable George Rosen. In addition to the two novels, this book has an informative introduction by pulp historian Will Murray; the Max Erhlich radio script for “The Secret of the Shadow,” which was broadcast November 21, 1943; a spotlight article by Tollin; and the Iron Munro story from Shadow Comics #4 [June, 1940]. The story was written by John W. Campbell, adapted into comics form by Theodore Sturgeon and drawn by Elmer C Stone.

Posted by Tony Isabella at 9:17 PM