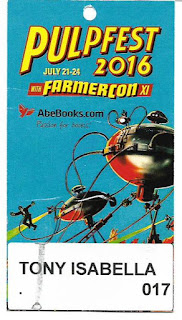 PulpFest 2016 (with FarmerCon XI) ran from Thursday, July 21 (6 pm) to Sunday, July 24 (2 pm) at the Greater Columbus Convention Center in Columbus, Ohio. Things were a little different for the con this year and more than a little off for me personally. The former was stuff out of the hands of PulpFest and the latter had nothing to do with the event. As they do every year, the convention committee put on an outstanding event.

Don’t let anything in this multi-day convention report give you a false impression. PulpFest is and always will be aces in my book. I will be writing about things not remotely the con’s fault. If I weren’t such a whiney boy, I’d skip over them. But I am what I am. I need to purge these things from my psyche.

YOU HAVE BEEN WARNED

Thursday afternoon saw me on the road to Columbus. I’d worked well into the wee hours of the night. I was frustrated I hadn’t finished more of what I had hoped to finish, doubly so because my plans to purchase a laptop on which I could work during the weekend hadn’t come together. I was frustrated and tired, a combination which made me more than a little grumpy. Still, I was really looking forward to PulpFest. It’s one of my favorite conventions.

My main reason for coming to PulpFest - I don’t collect pulps and I don’t often have time to read either “new pulp” fiction or those spiffy reprints of classic pulp heroes from my pal Anthony Tollin’s Sanctum Books - is to see dear friends I don’t see anywhere else. So I was looking forward to seeing Tollin as well as Ron Fortier, Rob Davis, Michelle Nolan and others.

I also enjoy staying at the Hyatt Regency hotel, which is one of my favorite hotels. Their rooms are always clean and comfortable. The staff is always friendly. Besides being connected to the convention center, the hotel is also connected to a terrific shopping area and food court. The shopping area has a nice little comic-book store. The food court has a great breakfast place (Chicken and Egg) and a wonderful Chinese place (Siam). I’ve eaten at those places so many times and at so many different events that the owners recognize me and always greet me warmly.

However, when I arrived at the hotel, something seemed off to me. The parking valet - a young woman - was friendly enough and so was the bellman who brought my luggage and assorted boxes to my room. But I thought the front desk staff was just going through the motions. They weren’t exactly chilly, but neither were they warm. That was a sharp contrast to previous years.

The second blow to my weekend came when I walked down to the food court to get some of the Siam’s delicious chicken fried rice. The food court was closed for renovation. As it turned out, the court would be open until 3 pm each day, but there was no indication of that on the closed doors blocking entrance to the court. I didn’t find out until Friday afternoon that I could have had breakfast at Chicken and Egg. Instead, I had to settle for a leaden, tasteless bagel from a Starbucks in the convention center. I’m not sure that  bagel isn’t still with me.

The PulpFest dealers room, which is the heart of the event, was not in its usual Regency Ballroom location. Apparently, the hotel had double-booked the weekend and the show’s traditional space had been given to some sort of Amway-like healthy foods company. I’ll have more on that later in this convention report.

The PulpFest dealers room was now located in the enormous Battelle South exhibition hall on the third floor of the convention center across the large foyer of the Regency Ballroom. If it weren’t for the signage outside the hall, you wouldn’t have known PulpFest was even there. Once you entered the hall, it was a bit of a hike to actually get to the registration table and dealers room. The hike isn’t a complaint as it helped me reached my Fitbit goal every day of PulpFest. Go health!

My mood lightened immediately on walking into the dealers room. The early bird shopping wouldn’t start until six pm, but I was able to walk around and greet various dealers and writers I knew from past PulpFest conventions. Among them, of course, was my friend of over four decades, Anthony Tollin.

“Tex” Tollin is one of my favorite people. He has had a remarkable triple-decker career. He was a colorist and production assistant at DC Comics for over two decades. He is a old-time radio expert who wrote books on that subject and wrote scripts for radio programs. A close friend of the late Walter B. Gibson, the top writer of The Shadow pulp novels and much more, Tollin is also the leading expert on both Gibson and The Shadow. Through Sanctum Books, he is about to publish his one-hundredth collection of The Shadow’s adventures.Tollin is a good man in every sense of the term: decent, honest, incredibly capable, knowledgeable and loyal to his friends. It’s an honor to be one of those friends.

Looking for a quick meal because we would be doing a panel later in the evening, we walked across the street to Max and Erma’s. Which was something of a mixed blessing. The food was good and the prices were very reasonable. The service was slow, but that gave us time to chat leisurely. Of course, the chatting would have been a little easier were it not for the presence of a guitar player who combined being very loud with being not very good.

Our evening panel (9:10-9:55 pm) was the first panel presentation of the convention. “Street & Smith’s Second Stringers” was on Cap Fury and The Whisperer, two of the characters who starred in their own somewhat short-lived titles before appearing in the back of Doc Savage and The Shadow magazines. Cap Fury, aka the Skipper, had a seemingly seen-better-days ship that was, in reality, an advanced vessel filled with all sorts of scientific gadgets and firepower. The character was a favorite of a young Stan Lee.

The Whisperer was Police Commissioner James Gordon before the guy with the same name who appeared in the Batman comic books. He was hostile to most authority - he used to punch out his politically-connected deputy police commissioner on occasion - quick-tempered, short of stature and somewhat - as it a lot - ambivalent about the law and civil liberties. To fight crime his own way, Gordon would become The Whisperer, a supposed criminal who was feared by other criminals. I could be this guy, which is why he’s my favorite pulp character after Doc Savage.

I was a nearly last-minute substitute for the esteemed Will Murray, a noted writer and historian. Will had to cancel his appearance at PulpFest due to a family matter. With some quick reading to refresh my memories of these characters, I was able to keep up with Tollin and contribute to the conversation. Afterward, several fans walked up to the podium to tell us how much they enjoyed the panel. Doing panels with Tollin is as much a pleasure for me as it seems to be for the fans. I was getting my PulpFest groove back.

The dealers room reopened at 10 am on Friday morning. At PulpFest, I generally split my time between the convention and relaxing in my hotel room. During my time in the dealers room, I chatted with old friends and made some new ones. I’d go into more details, but the notes I took on the convention have vanished into the vortex that is my office. To the names I have already dropped, I’ll add writers Frank Schildiner and John C. Bruening, Wisconsin newspaper editor Rodney Schroeter, comics and pulp dealer Gary Dietrich, long-time Cleveland buddy Marty Swiatkowski, Chuck Welch (the new editor of The Bronze Gazette), Dick and Norma Enos, Laurie Powers and others. Place your bets now on how soon those vanished notes will reappear. I’m thinking within a hour of my posting the final chapter of this PulpFest report.

As has become a PulpFest tradition, I took Tollin to the excellent BD’s Mongolian Grill for our Friday night meal. The grill is this huge wheel on which a dozen or more meals can be cooked before your eyes and simultaneously. You fill your bowl with whatever you want from a wide selection of meats, veggies and other items. You select your preferred sauce from an equally wide selection. I have never had less than an excellent meal at BD’s, which is located a short walk from the Hyatt on Marconi Boulevard.

There are always a number of interesting panels at PulpFest. That night, the one I most wanted to attend was Laurie Powers’ talk on Street and Smith’s Love Story Magazine (the best-selling of all the Street & Smith titles) and the romance pulp phenomenon. Because the fastest growing demographic in comics readership is women, this is an area of both pulp and modern publishing that fascinates and intrigues me. Ever since I first learned of Love Story’s success, I have been hoping for someone to publish facsimile issues of the magazine and its sister romance pulps. If you publish them, I will buy them. Don't leave my money on the table.

Laurie’s talk was excellent. I learned a lot from her and found my interest in romance pulps even keener than before her presentation. If memory serves - those missing notes - she is currently writing a book on Daisy Bacon, a writer of romantic fiction and, for almost 25 years, the editor of Love Story Magazine.

Because of delays with earlier panels, it was pretty late by this time. I headed back to my hotel room for a spot of reading and a good night’s sleep. Would I wake up on Saturday with a less grumpy demeanor. You’ll have to come back tomorrow to find out.