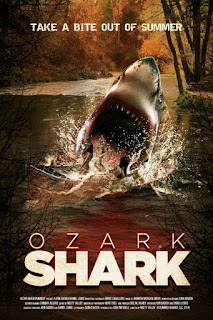 My favorite of the five new shark movies that aired on Syfy during the week leading up to the channel’s debut of Sharknado: The Fourth Awakens was Ozark Sharks (2016). In retrospect, this surprises me, but I’ll get into that in a little while.

Ozark Sharks (2016) was directed by Misty Talley who was the first woman to direct a SyFy original movie when she helmed last year’s Zombie Shark. This new film was written by Marcy Holland. The story is by Greg Mitchell, who wrote Zombie Shark and the 2014 Snakehead Swamp. Here’s the Internet Movie Database synopsis:

One of my Facebook friends commented that this movie could’ve taken place on the same river as Dam Sharks! Not only was he right about that, but it made me realize Ozark Sharks is a fairly generic shark movie. What elevated it to “favorite” status for me was the great characters, the great performances by the actors playing them and the over-all direction of the movie.

Molly (Allisyn Ashley Arm) is the daughter who doesn’t want to come on the vacation because she doesn’t want to be separated from her boyfriend. Her older brother Harrison (Dane Davis) is a good guy, who is also friends with her goofy boyfriend Curtis (Ross Britz). Her parents (Laura Cayouette and Michael Papajohn) are very real in their scenes and her grandmother (Sharon Garrison) is delightful. If you knew these people, you’d like them...and that puts viewers on the edge of their seats when they are in peril.

Shark movies often feature quirky characters and no one plays those better than Thomas Francis Murphy, who was outstanding in the Syfy classic Ragin Cajun Redneck Gators (2012). Here he plays Jones, the owner/operator of the general store and the cabin rentals and a man who is prepared for any kind of menace that comes his way. It’s a character type we see in many of these movies, but Murphy is just so good at it.

I should also mention Terence Rosemore turns in a good performance as the worst sheriff in the history of shark movies. Without going back to the movie, I don’t think he ever arrives at the location of the finale - a fireworks festival - even after he becomes convinced that there are actually sharks eating people up and down the river. He should probably look for a new job.

Director Talley keeps the gore to a minimum and I found that very refreshing. She can bring the chills and the scary without tossing CGI blood and rubber limbs around. When a character we have come to care about is in deep trouble, we care about them. When they don’t make it, it hits hard.

Some IMDb trivia: You can see a Zombie Shark coffee mug in one of the shots. The production company Fable House has produced a couple of shark films.

An IMDb error in geography: For a movie that was set in Arkansas they should have included some Arkansas Razorback stuff. In Arkansas you can't go anywhere and not see hats, signs or something that makes reference to the team.

This is a movie I will watch again and will buy whenever it becomes available on DVD. Alas, I could find no release date for said DVD. Come and get my money, Ozark sharks.

I’ve been rating these movies on a scale of zero to five Quints, a tribute to the Robert Shaw character in Jaws. Ozark Sharks earns an impressive four Quints.

Come back tomorrow for my review of Sharknado: The Fourth Awakens. I’ll be waiting for you.

Posted by Tony Isabella at 7:45 AM