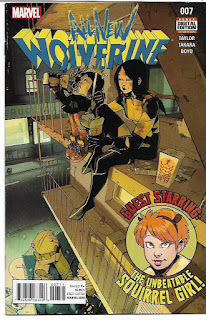 I’ve been neglecting my comics friends, what with all the reviews of shark movies and the announcements of my upcoming convention and other appearances. I have several convention and appearance reports coming your way in the next few weeks, but I’ll be breaking those up with comics review columns like today’s bloggy thing. Let’s see how many books and comic books I can cover over the next thousand words or so...

“Why did it have to be clones?”

That has pretty much been my reaction to X-23/Laura Kinney/the All-New Wolverine since she first appeared on TV’s X-Men Evolution and in various comic-book series over a decade ago. Laura is a female, teenage clone of Logan. For me, who has never much liked the whole idea of functioning clones in the Marvel Universe - and that may be a topic for a future bloggy - she was just kind of sort of there. Tragic beginnings, deadly assassin, struggling to find redemption and a place in the world or with the X-Men, blah, blah, blah. I’m better those of you with better Marvel Universe memories than mine can name a half-dozen characters to whom that sentence could apply. This is what it sounds like when cliches cry. However...

As unread issues of All-New Wolverine began to catch my notice, I decided to set down and read the first nine issues [$4.99 for the first one, $3.99 for each of the others]. I mistakenly believed a young friend of mine had told me she enjoyed the series. It turns out it was Old Man Logan she enjoyed - I didn’t enjoy that series - but, on occasion, mistakes lead to good things.

Written by Tom Taylor, who has written a bunch of things I have not read and been nominated or won awards for some of that, the series finds Laura as a member of the All-New X-Men, one of several teams of X-Men currently active in the Marvel Universe until the X-books go the way of the Fantastic Four. She’s in a relationship with the ripped-from-the-past young version of the Angel. Because she does not want anyone to die on her watch, she’s been reckless in battle and pushing her healing factor to the max. Then she meets several clones of herself, clones who escaped from evil folks, clones who want revenge on those evil folks, blah, blah, blah. Why did it have to be clones? Except...

This time around, in All-New Wolverine, the clone story line worked for me. Taylor made the X-23 clones, who lack the healing factor of Laura and the original Wolverine, characters I came to care about. The initial arc ended in a sad but satisfying manner, but it left All-New Wolverine in a wonderful place. A place where Laura raises the youngest of her clones in a big sister/little sister manner. A place where they hang out with Squirrel Girl for an issue or two. A place where they have a per wolverine. A place when they have to contend with a horny Fin Fang Foom, driven sex-mad by giant monster pheromones. What’s not to love?

You don’t need to read a dozen other Marvel titles to enjoy All-New Wolverine. Give it a chance. 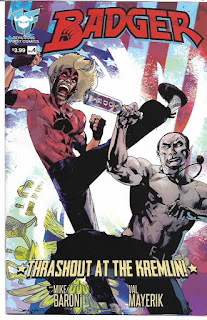 I’m getting a kick out of the latest series of The Badger [Devil’s Due/1First Comics; $3.99 per issue]. Written by creator Mike Baron with art by my Living Mummy collaborator Val Mayerik and colors by Paul Mounts, it’s the wild delight you would expect from a series about a combat veteran with multiple personality disorder and who lives in a world where wizards and demons exist. For example, in a plot development I never saw coming, it turns out Russia’s Vladimir Putin is one of those wizards.

I’ll admit I could use a scorecard to help recognize the Badger’s  various personalities, but that’s a minor quibble about comics that offer elements like a wizard quest to gain power from the blood of mammoths, incarcerated Russian musicians called the Crotch Rockets, global political satire and more. The writing is fun, the art adds a sense of reality to the bizarre, these are among the reasons why the Badger, that super-hero child of the 1980s is fondly remembered and enjoyed to this day.

I don’t know if and when this current series will be collected into a single volume. In the meantime, search online or at conventions for the four volumes of The Complete Badger. These books reprint the first 23 issues of the original Badger series. Be prepared to look for discounts or pay high secondary market prices. I suspect Putin has been manipulating the Badger market. 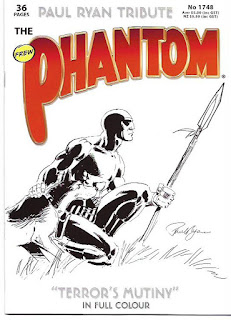 American fans of Lee Falk’s The Phantom might not aware that, since 1948, Frew Publications of Australia has been publishing wondrous black-and-white comic books reprinting classic and current Phantom comic-strip adventures as well as European stories that have never been seen in our country. I started buying Frew’s The Phantom with issue #1100. My most recent issue is #1756.

The Phantom #1748 [$5 Australian, which translates to roughly $4 in U.S. dollars) marked a first for Frew. It’s a full-color tribute to the late Paul Ryan (1949-2016], who had drawn the Phantom newspaper strip for many years. Ryan is perhaps better known for his work on top Marvel Comics titles like Fantastic Four.

The 36-page issue reprints the Ryan-drawn “Terror’s Mutiny” story, which ran from April 21 to August 23, 2014. Written by Tony DePaul, it’s the 239th Phantom daily story. Also in the issue is a dynamic centerspread by Ryan, the lively letters column, tributes to Ryan and a moving back cover memorial. 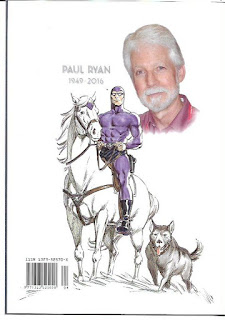 Other issues of Frew’s Phantom contain adventures originally done for Egmont starring the Phantoms of the past. Issue #1749 has two stories, one is set in 1943 and the other, featuring our Phantom, is the new chapter of an ongoing serial. Back to the usual black-and-white format, this issue is $3.50 Australian or about $2.75 in U.S. currency.

Shipping from Australia can be expensive, but these Frew Phantoms are among my favorite comic books. For information on how you can order them, go to this website.

I’ll be back tomorrow with the beginning of my G-Fest 2016 report. I think you’ll enjoy it.