DOC SAVAGE #82: THE BOSS OF TERROR 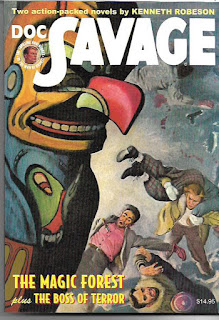 Here’s the word on another Sanctum Books classic...

Doc Savage #82: The Boss of Terror and The Magic Forest [June 2015; $14.95] reprints two novels by Lester Dent and William G. Bogart (writing as Kenneth Robeson) that literally take Doc from one end of the country to the other.

Dent’s The Boss of Terror first appeared in the May 1940 issue of Doc Savage Magazine. The adventure is set in the Main wilderness. Here’s the back cover blurb:

Bogart’s The Magic Forest is set in Alaska, well before it became a state. It’s from the April 1942 issue of Doc Savage Magazine. The back cover blurb:

Renny is, of course, one of Doc Savage’s five friends who share his love of adventure and his commitment to fight evil and help people.

This book also reprints the five-page Bill Barnes comic-book story from the second issue of Shadow Comics.
As with other Sanctum Books editions - The Black Bat, The Shadow and others - these Doc Savage novels are entertaining journeys into the heroic fiction of the pulp era.  They’re wonderfully made books and I regularly despair I might never get around to reading all of them. More to come.

Posted by Tony Isabella at 9:03 PM