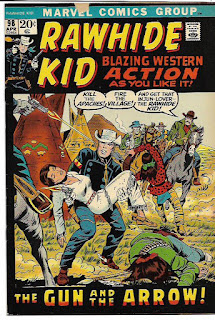 The Rawhide Kid is my favorite western comics character and one of my favorite comics characters period.  Something about the short of stature (but big on courage and fighting skills) Johnny Clay spoke to the short of stature (but big on comics-reading skills) teenage Tony Isabella.  After rereading the Kid’s earliest adventures when Marvel Comics reprinted them in a pair of Marvel Masterworks and an Essential Rawhide Kid volume, I wanted to reacquire every Rawhide Kid comic, reread them and write about them in this bloggy thing of mine. This is the 84th installment in that series.
The Rawhide Kid #98 [April 1971] has a cover drawn by Larry Lieber with Bill Everett inks. Inside the issue, Lieber’s “The Gun and the Arrow” (14 pages) is one of his very best Rawhide Kid stories. It’s inked by George Roussos. I like this issue’s tale so much that I’m going to tell you as little as possible about it.

The story opens with three bushwhackers killing two Apache braves. They don’t spot a third brave who heads to their camp to tell the tribe what has happened.

The eternally wandering Rawhide Kid has also seen the murders and takes matters into his own hands. His plan to turn the bushwhackers over to the law changes when they draw on him. It’s the last thing they will ever do before heading to Hell.

Other Apaches come across the scene and, not having heard from the third brave, open fire on Rawhide. They don’t kill him, but he is in bad shape.

The Apaches bring the Kid to Iron Wolf, chief of their tribe. That third brave from before, who apparently lingered long enough to see Rawhide avenge his fellows, shows up in time to confirm our young hero’s innocence.

Iron Wolf turns Rawhide over to his sister Bright Fawn for healing. Romance blossoms and the Kid begins to think he has at last found the peace he has always sought.

But there are bad white men in town who would profit from a war between the Apaches and the white townspeople. They’re more than willing to take extreme measures to make that happen.

This story has it all. Action, romance, tragedy and, at the heart of it, some profound social commentary. Though the setting is the Old West, the same bigotry and fears and rush to judgment espoused by the likes of Donald Trump are with us today. Sadly, those foul attitudes have even more potential to bring harm to the innocents than they do in this classic Rawhide Kid story.

I think the time is well overdue for Marvel Comics to publish The Best of the Rawhide Kid by Larry Lieber. My pal remains one of the best and most underrated writers of the 1960s and 1970s. His work deserves to be seen by modern readers.

I urge you to track down this issue for yourself. “The Gun and the Arrow” is also reprinted in The Rawhide Kid #150 [March 1979] with a cover by Tony Dezuniga. 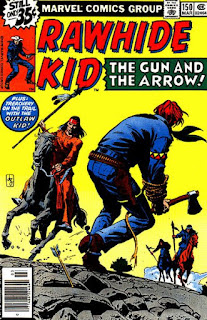 Two four-page stories from the 1950s follow the cover story. Red Hawkins and Tall Feather - two travelers who apparently had their own series - appear in “The Wild Beast” with art by Syd Shores. The story first appeared in Apache Kid #53 [December 1950]. The second story is “Back Down Or Die!” by Stan Lee and Doug Wildey from The Ringo Kid Western #16 [February 1957].

Red Hawkins and Tall Feather are a rather bland duo. Red bets Tall a plugged nickel that his friend can’t capture a wild horse, then heads to town alone.

Tall feather does succeed, only to be ambushed by a couple of horse thieves. The wild horse helps him fight them off and, in gratitude, he frees the animal. Yawn!

“Back Down and Die!” is one of those Stan Lee stories that combine a surprise ending with a moral. Town tough guy Bull Morgan has told everyone that he plans to marry the new schoolteacher. The teacher arrives...and he’s a man.

Bull is mocked and takes it out on the schoolteacher. He tells the man to draw, but the teacher is unarmed. Bull tells the teacher to get out of town by dawn or he’ll throw him out.

The teacher isn’t about to leave:

I was sent here to set up a school for children! No brawling bully can deprive the youngsters of this town of an education.

A townsman tells the teacher he’ll have to back down or die. This is usually where we learn the teacher is a former Texas Ranger or something. Stan spins that.

The teacher is just a teacher. But he’s a teacher with a shotgun. He tells Bull he’s got a 50-50 chance to shoot him before the bully dies. No matter how fast he is, Bull doesn’t like those odds. He refuses to draw and leaves town, vowing to go to another state, change his name and become a rancher:

I’ll never be able to look at a gun again...

The teacher gets the last speech:

Well, that takes care of the first lesson I’ve taught...the best way to beat a bully is to stand up to him on your own terms. And now...it’s time for school!

“Back Down and Die!” gave me an idea for a short western story of mine own. I’m not sure if I’ll write it as a prose tale or a comics script. But it’s on the list for later this year.

The “Ridin’ the Trail with Rawhide” letters page is back this issue with an apology for its absence in recent issues and four missives from readers.

Jim Rubino of Hollywood, Florida praises issue #94 for portraying what he thought was the first black man in a western comic book and for its strong stance against bigotry. In all fairness, Dell’s Lobo, which starred a black cowboy, only lasted two issues before it was cancelled due to poor sales. Unfortunately, the poor sales were caused by local distributors refusing to deliver the title to the newsstands they serviced. That was still a concern when Marvel launched Luke Cage, Hero for Hire.
Greg Puryear of Charlotte, North Carolina wants longer Rawhide Kid stories, more new stories with new characters in Marvel’s western comics and the return of the Scorpion. The Rawhide Kid foe and not the Spider-Man villain. The unknown Marvel person answering these letters states Larry is most comfortable with the current length of his stories.

Ben McLeod of Glen Arm, Maryland has a question about the Kid’s real name and a complaint that Kid Colt’s clothes are ridiculous. For the record, Rawhide’s real name is Johnny Clay, but, as he was raised by Ben Bart, many people knew him as Johnny Bart.

Frankly, Dan, the idea doesn’t hit us quite right. Kinda seems that anyone named the Rawhide Kid would look a little out of place in Buckingham Palace. But what do we know? We’ll toss this our for the fans to decide, too. It’s great bein an editor when you don’t have to make decisions...

That’s it for this edition of “Rawhide Kid Wednesday.” I’ll be back tomorrow with more stuff.

Posted by Tony Isabella at 8:47 AM