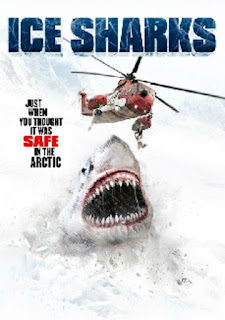 The Asylum’s Sharknado: The 4th Awakens was the big finish of the Real Shark Week on the Syfy channel, which ran July 24-31. Five new shark movies made their debuts before the latest in the Sharknado series and two of them also came from The Asylum.

Ice Sharks (2016) was shown on Tuesday, July 26. Emile Edwin Smith directed and wrote the movie. Smith has many more movie credits for visual effects, but he also directed Mega Shark vs. Mecha Shark two years ago. With the warning there will be both minor and major SPOILERS AHEAD, here’s the Internet Movie Database synopsis for this new film:

A new breed of aggressive, ravenous sharks cracks the frozen ocean floor of an Arctic research station, devouring all who fall through. As the station sinks into frigid waters, those alive must fashion makeshift weapons or suffer the same fate.

Pun intended, I never really warmed up to Ice Sharks. The opening sequence had a team of sled dogs and their master fall victim to a shark and that kind of soured me from the start. I know it’s crazy to have a stronger reaction to the slaughter of dogs than humans, but there it is.

The actors in this movie all perform well, but none of them gives an outstanding performance. You can pretty much tell from the get-go who the “Rule of Two” survivors will be, though I kept expecting an early scientist victim to reappear. Sure, he had his leg pulled off when a shark ate his ski-mobile, but we never actually saw him die. My expectation was doubtless born of my long decades reading and writing comic books.

I could tell when and how various characters will die with most such of those deaths telegraphed long minutes before they happened. I was not surprised when a really big helicopter, large enough to lift the sunken station, got destroyed by one of the bigger sharks. Because I saw Jaws 2 and the dozen other movies where helicopters and their pilots have met that fate.

On the plus side, the sunken research station bit was an exciting twist. I also give kudos for the no-nonsense rescue attempts that ultimately succeed. In fact, my spirits were so lifted that I was even okay with a shark stuck in a station window and trying to work its way into the station for a quiet meal with the comely scientist inside said station.

Was I surprised when that “dead” shark came to life on the deck of the rescue ship? Come on. You know me better than that.

In the trivial mistake category, IMDb offers this:

The map that is referenced while talking to the Hunters is of Ross Island and the Ross Sea those are part of Antarctica not the Arctic which is where the camp is supposed to be.
Geography is hard.

Ice Sharks was worth a single viewing because all I ask of movies like this is that they amuse me for a couple hours. At the moment, neither Amazon or The Asylum website lists a DVD or digital release for the film. I’ll keep an eye out for it. 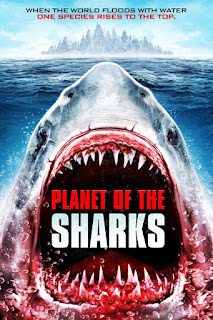 Planet of the Sharks (2016), which premiered on Wednesday, July 27, was my second favorite of the pre-Sharknado 4 features. This movie  was directed and co-written by Mark Atkins, who has many credits as a cinematographer, editor and just about every other movie-making position you can think of. He directed Sand Sharks (2012) and wrote Dragon Wasps (2012), to name but two of his credits. Marc Gottlieb was the other writer. This is the first time I’ve seen one of his movies. The IMDb synopsis:

In the near future, glacial melting has covered 98% of earth's landmass. Sharks have flourished and now dominate the planet, operating as one massive school led by a mutated alpha shark.

That synopsis strikes me as a bit of an exaggeration. I never got the notion that one alpha shark was controlling all of the other sharks on the planet, just the admittedly vast number of sharks in the part of the ocean where this movie takes place.

We see three floating cities, two of which are relatively easy prey for the sharks. The third one is the strongest, a research facility where scientists are preparing to fire a rocket containing “carbon dioxide scrubbers” into the atmosphere. These devices would reverse the global warming that caused this global ecological disaster and get the seas to recede from the land. It’s crazy pseudo-science at best - and not the only such example in the movie - but it doesn’t go beyond my well-developed willing suspension of disbelief.

The Planet of the Sharks acting is above-average. There are women scientists who are tough as nails. There are men scientists who can surprise you. There’s a crusty - but still handsome - boat captain who works for the scientists. There are various “middle management” types who are fun to watch. There’s even an over-the-top queen of the shark-hunters who looks like she could have come out of Mad Max and who chews the water-logged scenery in a most delectable manner. Points to the actors, director and casting director.

The pseudo-scientists figure out the sharks are commanded by that big-ass alpha shark, conveniently marked so we can always tell her from the others. They come up with a clever way of disrupting her power over the other sharks. That I was more than ready to believe this is also to the movie’s credit.

The CGI effects are up to the usual Asylum standards. The plentiful action contains some truly exciting moments. The movie delivers a satisfying ending which, though it exceeded my willing suspension of disbelief by a hair, worked for me. I’d watch this movie again and might even buy it for my home library.

Alas, neither Amazon nor the Asylum’s own website, lists Planet of the Sharks as being available on DVD or digitally. I do recommend watching the film, but your best bet for that is to watch for Syfy channel reruns.

Planet of the Sharks earns four out of five Quints.

I’ll be back tomorrow with my review of Ozark Sharks, my favorite of the pre-Sharknado 4 premieres. See you then.

Posted by Tony Isabella at 8:03 AM