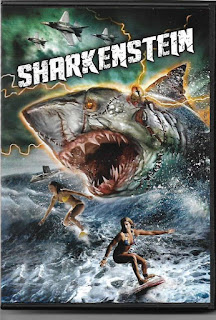 I’ve watched a number of horror/monster/science fiction movies in recent weeks. I’ll start with the one I enjoyed the most and then do the others in chronological order of release.

Sharkenstein [2016] is another low-budget entertainment from Mark Polonia and Wild Eye Releasing. I ordered it from Amazon [$19.95} as soon as I hear about it because, come on, look at that amazing title. How could I resist?

Polonia is the director and producer of this and 36 other movies of this nature. The only one I recall seeing is Jurassic Prey [2015], which I didn’t like nearly as much as I liked this one. If I still have that one, I should watch it again. Polonia also co-produced Queen Crab [2015], which helps his credibility with me.

First-time writer J.K. Farlew did a decent job here. Since he had nothing to do with the budget, I’ll give him points for a hilarious premise and a decent script.

The actors? You’ve probably never heard of any of them. I’ll name the interesting ones in the course of this review.

Here’s the IMDb summary of the film:

In the final days of World War II, a secret experiment to weaponize sharks is shut down and destroyed by the Third Reich. But now 60 years later, a small ocean town is plagued by a bloodthirsty, mysterious creature, one built and reanimated using parts of the greatest killers to ever inhabit in the sea - the Sharkenstein monster!

Jeff Kirkendall plays the mad scientist who, now that his patchwork shark is functional and obedient, moves onto the next phase of his plan to create a Fourth Reich. He wants to transplant the immortal brain and heart of the Frankenstein Monster into his badly-animated shark. I love this concept and think it should be carried over into a series of sequels: Squirrelenstein, Cowenstein, Cosbyenstein, Trumpenstein, the possibilities are endless.

Ken Van Sant plays the competent local lawman. I liked how he got irritated at the idiots and the insanity he had to deal with here.

The most irritating characters might be the three teenagers who have come to the town on vacation. One of the two male “teens” looks to be in his 30s, the other in his 20s.

Greta Volkova is the third of the “teens.” She looks like a mid-20s call girl role-playing as a pig-tailed schoolgirl, but she’s cute and fun to watch, especially when she rattles off the titles of all the Frankenstein movies made by Universal and Hammer to the lawman. They have this older man/younger woman who wants to jump his bones thing going for them.

There’s also am entertaining mob of angry townspeople who, after Sharkenstein evolves into a creature who can move on land, hunt him with pitchforks and machine guns. This made me laugh.

The thing is...up to that moment, I thought Young’s character was fun. Me, I would have had Bonnie attracted to the monster and be the aggressor. Afterwards, Sharkenstein would spare her and lumber off. Bonnie would complain that he’ll probably never call him. Men are all monsters.

The last scene of the movie is dumb. It’s a last scene you’ve seen many times. Even low-budget films can do better.

I can’t stress enough that this is a low-budget movie. But I got a kick out of it and, on that basis, recommend it to you. 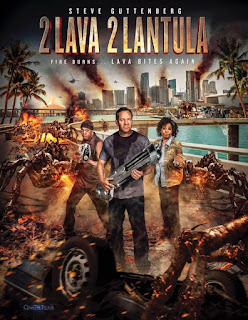 Colton West must defeat the lavalantulas once again.
Before long, I was rooting for the lavalantulas. That’s on either Steve Guttenberg, who plays aging action hero West, or director Nick Simon. Whichever one of them decided Guttenberg should speak in the kind of stupid growl voice used in the recent Batman movies. Every time he opened his mouth, my ears hurt.

That was the most prominent flaw in this movie, but it had plenty of company. Writers Neil Elman and Ashley O'Neil filled the script with “look at me” homages to other movies and repeat shockers from the original Lavalantula. They also made the familial relationships in the movie hopeless complicated. The source of the movie’s title, a line of dialogue seen in the trailers, feels forced.

Michael Winslow and Marion Ramsey, Police Academy alumnae who shone in the first Lavalantula, show little enthusiasm for this by-the-numbers sequel. By the time, Martin Love’s military character gets ready to nuke Florida - like in most every movie involving kaiju in the city - I’m thinking it might have been worth it if it meant that there would not be a Lavalantula 3.

Yes, I am being hard on this movie. Because, unlike Sharkenstein, it had a decent budget. It could and should have been better than this seemingly slapped-together mess. I won’t be buying the DVD and I won’t be watching it again. 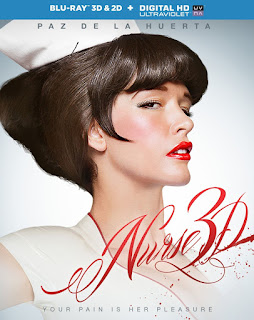 Nurse 3-D [Lionsgate; 2013] is a slasher movie that I got from my local library and watched sans 3-D, which was apparently added via CGI after the movie was filmed because it was cheaper. The film was fun to watch because of the haunting and over-the-top performance of Paz de la Huerta as murderous nurse Abby Russell. Everything you need to know about Abby is in de la Huerta’s opening monologue:

My name is Abigail Russell. I look like a slut. But don't be fooled, this is merely a disguise to lure the dangerous predators who walk among us. This is their jungle. Their breeding ground. And tonight I'm on the hunt. These are the cheaters - the married lying scum. They are like diseased cells, cultured in alcoholic petri dishes, but destroy unsuspecting families, and infect millions of innocent vaginas. There is not cure for the married cock. Only me, the Nurse.

There are decent performances by Katrina Bowden and Corbin Bleu as a young nurse and her paramedic boyfriend. Abby desires the nurse, but, when rejected, tries to frame Bowden for her murders. We get several chilling and gory deaths, culminating in a chase through a hospital. The movie earns its “R” rating, but the rising body count always serves the plot.

Nurse is directed by Douglas Aarniokoski, whose directed episodes of several TV series, including Limitless, Arrow, Criminal Minds, The Flash and Sleepy Hollow. Co-written by Aarniokoski and David Loughery, this film deserves a sequel. 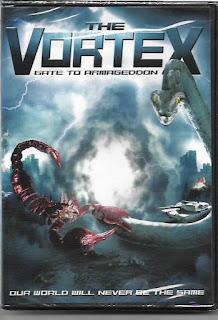 I watched The Vortex [2012] - aka The Vortex: Gate to Armageddon - without knowing I was watching it. I had watched Big Bad Bugs on Amazon Prime, not learning until I started researching it that it was actually a movie I owned on DVD but had never gotten around to watching. Here’s the IMDb summary:

After a convoy of American soldiers disappears, a special ops team is deployed to rescue them. They soon encounter an army of gigantic scorpions, spiders and snakes that have come to Earth from another dimension.

This is your basic worth-watching-once movie. It gives us a giant scorpion attacking American soldiers from the get-go, but takes its time before it rolls out alien spiders, more scorpions, what looks like a cardboard hornet and some really big snakes.

Good performances by Jack Plotnick and Ted Jonas as an odd couple super-scientist and military tough guy. Sarah Lieving plays a combo scientist/high-ranking military officer who was married to Plotnick and is engaged to Jonas. She’s okay in the role, but the bromance between the romantic rivals is choice.

Camden Toy chews up the scenery as a mad scientist who wants to see the world swallowed by an other-dimensional wormhole. He faces off with Jonas in a goofy climatic battle that leads to another one of those unsatisfying endings horror movies thrive on. I swear these things need a double-shot of originality. 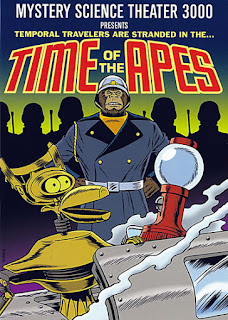 One more for today. Here’s everything you need to know about Time of the Apes [1987} and it comes to you via Wikipedia...

Saru no Gundan (Army of the Apes) is a Japanese science fiction series from 1974 based on Pierre Boulle's La Planète Des Singes ("The Planet Of Apes"). Produced by Tsuburaya Productions, the series ran for 26 episodes and followed a female scientist and two young children who travel through time to a future ruled by apes. The trio struggle to find a way to get back home to the 20th century.

In 1987, television producer Sandy Frank edited together several episodes of the series, including the first and last episodes, into a movie called Time of the Apes. Syndicated to broadcast and cable outlets, this compilation film was also released on home video in mid-1988.

The movie was then featured twice on Mystery Science Theater 3000, originally on KTMA in 1989, and then later as part of season 3 in 1991 on Comedy Central.

It’s hard to judge the TV series from this compilation movie that seems to consist of the first and last episodes with some passing scenes from in-between episodes. It’s even harder to judge when the only version I was able to find was the chopped-up mess brought to us by those rude and unfunny jerks of Mystery Science Theater 3000.

Yeah, yeah, I know. It’s brilliant comedy. It’s like sitting in an actual theater with oh-so-clever friends. I’ve heard it all before. Here’s the truth:

You’re all wrong. Every last one of you is wrong. It’s a horrible program with pathetically dismal skits. I’d rather watch even the worst of the (uncut) movies they mock than this show.

That’s all for today. Come back tomorrow for another installment of Citizen Tony.

Posted by Tony Isabella at 9:42 AM