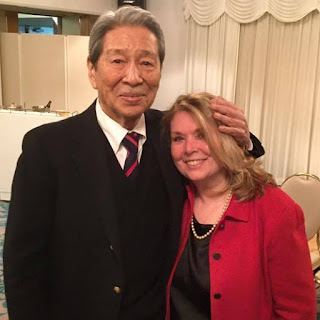 Were I to heed the shrill warbling of the orange-crested turdbird that is Donald Trump, I would live my life in a constant state of irrational anger, mindless bigotry and constant soul-crushing fear. Fortunately, my natural demeanor leans toward hope and reasonable caution. I like to remind myself on a daily basis of the blessings of my existence in a Facebook and Twitter feature I call “Things That Make Me Happy.”

Here are the things I posted in July...

July 1: Indy Pop Con. It's already one of my favorite conventions. I’ll return to it as often as the event invites me.

July 2: The irony of anonymous trolls calling me a coward for not publishing their garbage comments on my blog.

July 3: Our annual July 3 cookout. Friends and neighbors come over to watch the local Medina Ohio fireworks display, which are visible from our front yard.

July 4: PS Artbooks. Some of their collections of 1940s/1950s comics contain mediocre material, but I love these blasts from the past.

July 5: The Tithe Volume One by Matt Hawkins and Rahsan Ekedal. A hacker goes after corrupt mega-churches. I’ve read the first trade collection. It doesn’t pull any punches or take the easy way out.

July 6: Roger Price’s Mid-Ohio-Con. Thinking about those good times and even the hard work of them makes me smile. They were the best!

July 7: Seeing deer in our yard when I get the morning newspapers. I know they eat our flowers, but they add so much natural beauty to my life that I figure it’s worth the trade-off. Sainted Wife Barb does not necessarily agree with this.

July 8: Sir Patrick Stewart. An amazing actor, an even more amazing human being. My one encounter with him was unforgettable.

July 9: Genndy Tartakovsky’s Cage! It might end up being less than wonderful, but, right at this moment, I’m excited!

July 10: You can buy super-hero bears (Spider-Man, Wonder Woman and others) at Build-a-Bear.

July 11: Hand sanitizer will remove tree sap from the exterior of an automobile. My son discovered this online when he was trying to remove sap from his beloved “Penny.” Yes, we name our cars, though we sometimes disagree on those names. I drive “Monty,” an elderly Ford Monterey van with lousy air conditioning that sometimes hisses in Machiavellian delight. My daughter Kelly insists on calling it “Betsy.” It is definitely not a “Betsy.”

July 12: The love of my family. Something knocked the wind out of my sails yesterday, but I know Barb and the kids will always have my back.

July 13: That no matter how low I get - and, yesterday, I was ready to retire from conventions, the Internet and even writing - I can always fight my way back to the light.

July 14: Cleveland city officials passing a trans-friendly bathroom law before the Republican National Convention comes to town. Once again, I’m proud of the city of my birth.

July 15: Running four errands - groceries, haircut, bank, library - in under 90 minutes. No lines and all green lights from start to finish.

July 16: G-Fest. Such a wonderful and family-friendly convention. I’ll be back in 2017.

July 17: Seeing King Kong Escapes on a large screen in the lovely Pickwick Theater in Park Ridge, Illinois. Most comfortable theater seats ever.

July 18: Akira Takarada and Linda Miller. Such gracious G-Fest guests and so appreciative of their fans.

July 20: Martin Arlt’s Mad Scientist. Every issue has entertaining and informative articles on movie monsters and more. It’s one of my five favorite magazines.

July 21: Comic-Con in San Diego. I’d attend every year if I could. Even when I can’t, just the existence of this wonderful event puts a smile on my face.

July 23: Doing PulpFest panels with the knowledgeable and talented Anthony Tollin. I learn just as much as the audience.

July 24: Laurie Powers’ PulpFest panel on “Love Story Magazine and the Romance Pulp Phenomenon.” I would totally buy a facsimile of an issue of Street and Smith’s best-selling romance pulp.

July 26: My Bernie, Hillary and Obama action figures. Each of which is more qualified to be president than the real-life Donald Trump.

July 27: Michelle Obama. Accomplished, compassionate, intelligent, strong and elegant. Everything a First Lady should be.

July 28: The REAL Shark Week on the Syfy Channel. The movies might not be classics, but they are fun. Sharknado is the gift that keeps on giving.

July 29: Tony Isabella’s Bloggy Thing. I love writing it and that its daily visitors have more than doubled in the past few months.

July 30: Republicans who put their country before their party by, publically and privately, supporting Hilary Clinton. Welcome into the light. You are the hope of conservatism.

July 31: Ted Sikora. Filmmaker (Hero Tomorrow) and comics creator (Apama). It’s always a pleasure to hang with him at a convention.

I hope my wee shout-outs brought as much joy to you as they did to me. I’ll be back tomorrow with more stuff.

Posted by Tony Isabella at 8:32 AM