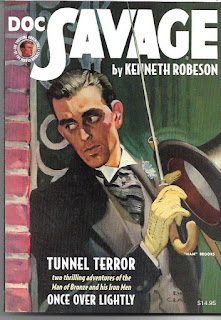 I have a tall stack of classy pulp magazine reprint books published by my pal Anthony Tollin’s Sanctum Books. While I can’t read them at present, I can give you a heads up as to the vintage adventure awaiting you.

Doc Savage #81: Tunnel Terror and Once Over Lightly [May, 2015; $14.95] has two Doc novels by William G. Bogart and Lester Dent (writing as Kenneth Robeson), as well as several other intriguing features. But, first, the Doc Savage stories...

Bogart’s Tunnel Terror is from the August 1940 issue of Doc Savage Magazine. From the back cover:

Emery Clarke’s front cover art is taken from the original magazine and features Ham. Covers showcasing one of Doc’s aides proved to be commercially unsuccessful and this was the last of them.

Dent’s Once Over Lightly is one of the last of a series of Savage stories told in the first person. It’s from the November-December 1947 issue of Doc Savage Magazine. From the back cover:

The owner of a California resort is murdered, but the victim’s own will could provide the clue to the mystery.

Noted historian Will Murray’s “Intermission” gives the background on these Doc Savage stories and his “Bill Barnes Flies Again” does the same for “The Eye of the Cobra,” which appeared in the January 1942 issue of Doc Savage Magazine. The story was written by Charles S. Verral under the house name George Eaton.

Air adventurer Bill Barnes also had a career in the comic books as covered in an essay by Tollin, a preface to the reprinting of “Bill Barnes vs. the Yellow Jackets,” a seven-page comics story drawn by Frank Tinsley. It’s from Shadow Comics #1 [January 12, 1940].

As with other Sanctum Books editions - The Black Bat, The Shadow and others - these Doc Savage novels are entertaining journeys into the heroic fiction of the pulp era.  They’re wonderfully made books and I regularly despair I might never get around to reading all of them. More to come.

Posted by Tony Isabella at 2:21 PM