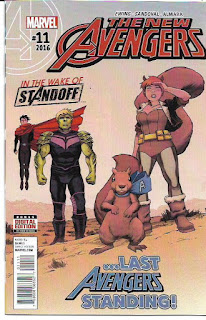 So I’m reading a recent issue of New Avengers when I realized this sad truth: if my life depended on it, I could not tell you how many different Avengers teams are currently active in the current Marvel Universe. Or which heroes are on which team. Or how many Inhumans teams are currently active and who’s on them. Or how many teams of X-Men and who’s on them, though I suspect the number of X-Men teams will dwindle in the wake of Marvel’s ongoing hissy fits over not having movie rights to their merry mutants.

I do know how many Fantastic Four teams are currently active in the Marvel Universe. Do I get points for that?

I find it incredible that Wizard World, using some third party to fill their vendor booths, did not have some mechanism in place to vet the vendors before selling them space. Wizard World events are their own thing. They generally include lots of non-comics, non-fan booths. When Sainted Wife Barb attended last year’s Cleveland show, those booths were of interest to her. Me, I sort of like expanding the comics tent to include them because I relish the opportunities to bring new customers into the comics business. But, then again, I’m also one of those rare old farts who doesn’t whimper and moan because comic books aren’t exactly like they were when I was twelve years old.

The consternation of the ammo-sexuals in comics will be vocal. They see so many non-existent America-destroying liberal conspiracies at every turn that I fully expect them to mutter under their breaths about “Second Amendment solutions.” From my point of view, having a gun vendor at a comics convention in Chicago, a city plagued by gun violence, was insensitive.

Noting all of the above, I think Wizard World was wrong to renege on their agreement to allow the gun vendor to exhibit at the con. Third party involvement or not, they had a deal with him. As long as he adhered to the convention’s rules for exhibitors, he should have been allowed to set up. Wizard World should learn from this, then make whatever adjustments to their vendor policies they need to make to avoid such situations in the future.

Unlicensed prints and products. Artists and other creators are now speaking out on this sort of thing, though, in truth, the artists mostly seem concerned about their own work being pirated and not with the copyright violations of characters they may have worked on but do not own. For me, it’s not a grey area.

Comic-book publishers have largely turned a blind eye to this sort of thing as a sort of perk to creators who work or have worked for them. That will certainly change because some of these pirate works present the creative properties in ways the owners would not and do not approve.

My own take on this is that legitimate comics creators - i.e., not those folks who sell prints based on the work of others - should  work with the copyright owners for the prints they sell at comics conventions. When I decided to create new products to sell at the conventions I’ll be attending in 2017 and beyond, I contacted the copyright owners to learn their policy. The meeting of our minds on this was cordial and painless.

I’m new to this print stuff, but hope to release up to ten limited edition prints for sale at my 2017 convention appearances. All of them would feature characters on which I’ve worked. Some will be covers of stuff I wrote, some will be original prints. I’ve already signed up the artists for two of the latter and will be talking to other artists in the near future.

I take copyrights pretty seriously. Yes, I have and will continue to take advantage of fair usage laws. Even the cover at the top of today’s bloggy is a case of fair usage.

There’s no way I could or would claim “fair usage” when producing prints for sale to the fans at conventions. I am delighted to work with copyright holders to meet their requirements in this area. I think this should be the standard operating policy for the comics industry.

This is an art form and a business. We should treat both aspects of it with the same integrity and regard.

Kudos to Action Lab Entertainment for combining several creator-owned characters into a six-issue Actionverse crossover. Not every one of the issues was a hit. I feel the conclusion of the overall story damaged the integrity of one of my favorite characters. But every one was, at the very least, readable and entertaining. The series was worth the readers’ investment in price and reading time. I like to see creators and publishers reach.

Besides...how can I not love a company called Action Lab who will be publishing a comic book called Action Lab: Dog of Wonder about a heroic Labrador Retriever? It has a cover by Neal Adams and, yes, I plan on buying it.

Not all hero crossovers are created equal. Over at Dynamite, they have two pretty dismal ones going. The first is Gold Key Alliance featuring Doctor Solar, Mighty Samson, Magnus, Turok and one of two other characters originally published by Gold Key/Western Comics in the 1950s and 1960s. The other is King’s Quest which continues the seemingly endless teaming of Flash Gordon, the Phantom, Mandrake, Prince Valiant and Jungle Jim. Both are tedious exercises in...oh, heck if I know.

I could accept nostalgic treatments of these classic characters. I could accept and quite possibly enjoy well-conceived updating of these characters. These two series are muddled middle ground. They are not well-written and merely adequately drawn. I’m struggling to get through the last issues of these things.

Dynamite loves to acquire licensed properties. Nothing wrong with that. But their record with these properties is less than splendid. Some have been terrific. Some have been just good but entertaining. Too many have been awful. They should slow down on these acquisitions until they can do justice to all of them.

On the other hand, I read and enjoyed the first two issues of DC’s Future Quest [$3.99 each]. This series is teaming up a boatload of Hanna-Barbera’s cartoon adventure heroes. Written by Jeff Parker with art by Evan Shaner, Steve Rude, Ron Randall and Jonathan Case, these issues dazzled me.

Confession. Outside of Johnny Quest, which I watched religiously, I didn’t watch most of the original cartoons these characters come from. I probably watched more episodes of Space Ghost and Birdman than the others, but, once the comics writing bug hit me, I would more likely to spend my Saturday mornings working on my own super-heroes than watching cartoons. I know Johnny Quest well and have, at best, a passing familiarity with the others.

Parker and crew have nailed the Johnny Quest characters. Birdman, Space Ghost and others seem right to me as well. This is a series I’ll continue to look forward to and read. When this series reaches its end, I hope we see spinoffs of some of the heroes.

I also want to write a Ruff and Reddy comic book. Can you hear me, Dan Didio?

One last note. I’ve mentioned elsewhere that I’m enjoying Marvel’s Hyperion by Chuck Wendig with artist Nik Virella. Basically, this hero from another world is trying to find his place in this world, a place which might not include the super-hero stuff. Yet, because he’s a pretty good guy, he can’t not help people.

There’s an internal monologue in which Hyperion is thinking of all the events that led him to his current status. He is unsure of the rightness of his past actions. He is unsure of what he needs to be doing...and then he thinks these thoughts.

Then I met her. Doll. And I thought, maybe I don’t have to help everyone. Maybe I can help just one human at a time.

I’m taking time off from the bloggy thing while I finish my first comic-book script in years, but I’ll be back soon with more stuff. See you then.

Posted by Tony Isabella at 8:48 AM