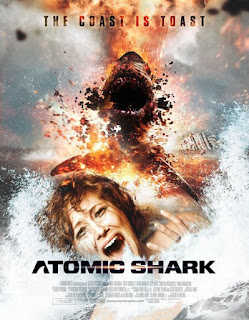 Sharknado: The 4th Awakens, the latest in the series of hilarious and exciting movies in the series, made its debut Sunday, July 31, on the Syfy channel. As was done with the 2015 debut of Sharknado 3: Oh Hell No!, Syfy built to the premiere by showing a brand-new shark movie from Sunday, July 25 through Thursday, July 29. Sorry, Discovery Channel, but, as far as I’m concerned, that was the REAL Shark Week.

Over the next three days, I’ll be reviewing all six movies. Today, you get my thoughts on Atomic Shark and Dam Sharks! There will be some SPOILERS AHEAD, but I’ll do my level best to keep them to the bare minimum necessary to help you appreciate these wild and wondrous adventures in B-movie making.

Atomic Shark (2016) was directed by A.N. Stone, who also directed last year’s Lake Placid vs. Anaconda. It is only his second time at the helm of a movie. The three credited writers for the movie are first-timer Scott Foy; actor Griff Furst, who is credited with the story for 2013's Ghost Shark; and Jack Snyder. Here’s the Internet Movie Database (IMDb) summation of the storyline:

When a lifeguard catches wind of a dangerous anomaly off the coast of San Diego, she commissions a band of unlikely heroes to assist her on a suicide mission to save the west coast from total destruction.

Lifeguard Gina is played by Rachele Brooke Smith, who was Muffy St. Pierre-Radwell on TV’s Scream Queens. She’s clearly the hero of the movie: courageous, determined, smart and gorgeous without allowing the last to define her. She is estranged from her father, played by the always terrific Jeff Fahey, but reunites with him to stop the title shark before it denotes and takes a good chunk of the coast with it.

Let’s talk about the title shark. Created by either previous bomb tests by our secretive government or leaking radiation from a sunken Russian submarine - the movie starts with the one and ends with the latter - it’s a glowing horror that seems to be burning itself out as it preys on helpless humans. While the CGI work on the shark is far from outstanding, it does the job.

Bobby Camp from Scream: The TV Series and Being Human plays Kaplan, the male romantic lead. He’s refreshingly off-model for that role. He’s brave but not really good at his job and this brings him into frequent conflict with the head of the lifeguards. His plans or his part in Gina’s plans are less than well-executed. Still, it’s his creative use of a drone when a leg injury keeps him from the water is pretty clever and essential to the plot.

The rest of the cast is good, especially David “Bud Bundy” Faustino  as a sleazy drone-maker and long-distance voyeur. No one is coming away from this film with an awards nomination, but I can’t recall any distracting moments of bad acting.

The atomic shark starts racking up victims within the first couple minutes of the 90-minute movie. Most of them are as predictable as if the shark had both a quota and a schedule. The ending, which has Gina, her dad and Kaplan trying to lure their radioactive predator away from the coast before it explodes, is honestly exciting with even Kaplan conducting himself well.

Atomic Shark worked for me. I enjoyed watching it and I’ll likely watch it again. No word on a home video release at this time, but I’ll be keeping an eye out for it. It might be worth adding to my home library of cheesy monster movies.

On a scale of zero to five Quints - you will find many a reference to Jaws in this week’s movies - I award Atomic Shark a sizzling four out of five. 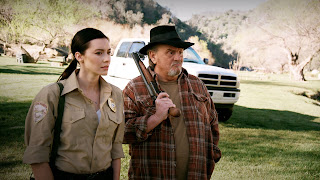 Dam Sharks! (2016) was the second of the “Real Shark Week” films on Syfy. Its premise strained even my well-honed willing suspension of disbelief:

That’s right. Sharks who somehow got into an inland river and were trapped there decide they love their new hunting ground. Which is why they build dams of logs and human body parts to...I don’t know...keep out the riff raff and not have to share all the tasty people who live and vacation on the river. Maybe there was a better explanation for these beaver-sharks in the movie, but I might have been in an incredulous stupor when it was given.

The movie was directed by brothers James and Jon Kondelik, who also directed 2014's Airplane Vs. Volcano. James has more credits as an editor, Jon as an actor. The writing is credited to Cole Sharpe and Joe Chisano, neither of whom appear in the IMDb. I suspect aliases.

Outside of the premise, neither the acting or the writing of this movie are that bad. Dealing with the menace of the sharks falls to a spunky forest ranger type and a crotchety river rat she has let slide on various minor offenses. The sharks obtain their meals and  building materials from a corporate retreat. There aren’t any real surprises in how the CGI sharks take their human prey, but I found something about their menu items interesting.

The purpose of the corporate retreat is to keep employees who are not being fired out of the office while the other 70% of the staff is sent packing. The idiot who owns/runs the company thought that would be bad for morale. The employees are the usual mix of babes, nerds and studs. While they mostly die by the numbers, some of them die quite heroically, trying to help someone else survive. Yes, you can easily predict who will die and who will live - most films like this end with two or three survivors at most - but the deaths hit harder when truly good people get chomped. I give the movie makers points for that.

Dam Sharks! is decent-but-not-outstanding cheesy entertainment for its running time of approximately 90 minutes. I get the feeling it was put on the Syfy schedule quickly because IMDb doesn’t have much information about it. Like Atomic Shark, the movie isn’t listed on Amazon in any form. I’ll let you know if that changes.

On our scale from zero to five Quints, I’m feeling kindly enough to give Dam Sharks! a somewhat respectable two Quints.

Rawhide Kid Wednesday is taking a week or two off, but I’ll be back tomorrow with my reviews of Ice Sharks and Planet of the Sharks. See you then.