THE PHANTOM DETECTIVE #2: DEALERS IN DEATH 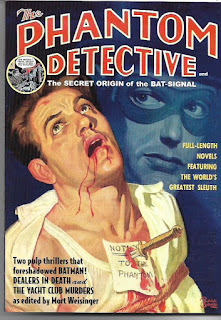 It’s been too long a while since I’ve told you about the wonderful pulp hero collections published by my dear friend Anthony Tollin’s Sanctum Books. Fortunately, when I attended PulpFest 2016 a couple weeks back, I got over two dozen of those volumes. I won’t be able to start reading them until later this year, but I can give you a heads-up as to their contents.

The Phantom Detective #2: Dealers in Death & The Yacht Club Murders [April 2015; $14.95] collects two pulp thrillers that foreshadows Batman. Both of these stories were originally edited by the famous and infamous Mort Weisinger, who ruled over DC’s Superman and even Batman comics for decades.

In “Dealers in Death” by Norman Daniels writing as Robert Wallace, newspaper publisher Frank Havens uses a rooftop beacon to call the Phantom Detective into action. The story, originally published in the July 1936 issue of The Phantom Detective, clearly inspired the Bat-Signal, which has been featured in every incarnation of Batman since 1942.

In “The Yacht Club Murders” by Charles Greenberg, the Phantom must save Muriel Havens, the publisher’s daughter, when she is abducted by the Bat, whose garb bears more than passing resemblance to that of the Batman. The story first saw print in the January 1939 issue of The Phantom Detective.

In addition to the two novels, this volume also features historian Will Murray’s insights into the character, his adventures and the inspiration that the Batman comic books took from them. There’s also an eight-page Phantom Detective comic-book story - by “Robert Wallace” and artist Edmond Good - from Thrilling Comics #65 [April, 1948]. 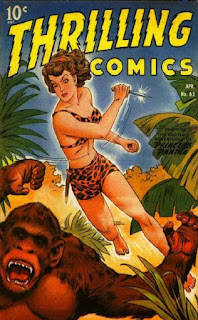 Here’s the Grand Comics Database synopsis for the story:

Publisher Havens goes to see a friend of his, Edgar White, in a sanatorium and is told that he had been in an accident. When Havens gets to see his friend, White tells him that the sanatorium is trying to kill him, just as three other patients mysteriously died. When Havens doesn't believe him, he does the next day when he learns that White "committed suicide", so he contacts the Phantom Detective via the red beacon light. The mystery man dons a disguise and has himself entered as a patient in the sanatorium in investigate.

All of the Sanctum Books collections are well worth buying and reading. I’ll be writing about them on a regular basis.