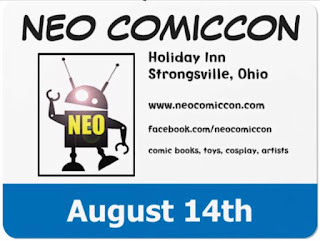 Neo Comic Con is my next public appearance. I say public on account of you couldn’t get into the private lectures I give to secretive organizations people don’t know exist and which, even if I revealed  their names, wouldn’t believe they exist. For example, I have the current Mr. Waverly on speed-dial and Japan’s Kaiju Defense Forces have me on speed-dial, though most of the brave men and women of the KDF don’t believe I exist. This is between me and you, okay?

Neo Comic Con will be held on Sunday, August 14, from 10 am ro 5 pm at the Holiday Inn, 15271 Royalton Road, Strongsville, Ohio. Event admission is only $5 with free admission to children 12 and under, and cosplayers of any age. Part of the proceeds from ticket sales will go to the Make-a-Wish Foundation.

I ran out of fingers, but my quick count of the vendors has over 30 of them setting up at the convention. Here’s a tip for them: I am bringing my active want list of the comics and magazines I need for my “July 1963" series and the late-in-the-run Rawhide Kid issues I need for my “Rawhide Kid Wednesday” feature.

I’ll be selling Black Lightning Volume One, the few extra copies of 1000 Comic Books You Must Read I have managed to acquire, the rare double-sided Superman/Clark Kent poster that I helped designed for Cleveland’s International Superman Expo that was held in Cleveland in 1988, a box of Isabella-written comics, a box of dollar comics and perhaps a few other surprises.

As per previous bloggy things, I am not charging for autographs at any of my 2016 appearances. That is going to change to some extent in 2017. I’ll have an announcement about that before the end of the year. Watch for it.

Neo Comic Con will be my last appearance until October. Because of work and family obligations, I had to cancel a few of my scheduled appearances and turn down other invitations. Here are the Isabella appearances still on the schedule for this year:

I’m looking forward to attending NEO Comic Con. If you live in the area, please come by and see me.

Posted by Tony Isabella at 3:24 PM