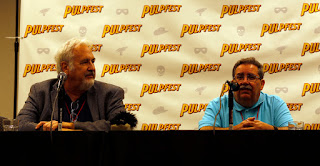 PulpFest 2016 (with FarmerCon XI) ran from Thursday, July 21 (6 pm) to Sunday, July 24 (2 pm) at the Greater Columbus Convention Center in Columbus, Ohio. The convention dealers room had been moved from its usual location to accommodate another organization. Renovations to the Hyatt Regency hotel and the food court connected to it were causing a few difficulties. But PulpFest was still PulpFest, one of my favorite conventions. The above photo is courtesy of Lewis Forro, one of the many terrific people I met over the weekend.

Saturday morning saw me in excellent spirits, though there would be a few moments of dismay as the day progressed. I went to the food court for my usual convention breakfast at the Egg and Chicken. I chatted with the owner who told me the long renovation process had hurt all the vendors in the court. As I mentioned yesterday, I’ve eaten at the Egg and Chicken and the Siam Express at so many events - they are owned by the same families - that their owners recognize me and always greet me warmly.

During the renovation, which would be going on for several months, seating for the food court had been moved from the court itself to the large foyer outside the non-food shops, such as the comic-book  store. As I sat down with my breakfast, my friends Ron Fortier and Rob Davis came through to get some coffee. Their Airship 27 is one of the leader publishers of “new pulp” fiction with over a hundred books to their name. They also have long and distinguished careers  in the comic-book field. We had a nice “catching up” conversation, the sort of unexpected pleasure that makes PulpFest such a special event for me.

The dealers room was opened from 10 am to 4 pm. Except for when I took a lunch break at the Siam - their chicken fried rice is among the best I’ve ever had - I chatted and I shopped. I was given some items and traded copies of Black Lightning Volume One [DC Comics; $19.95) for other items. Here’s what I ended up with, not all of it from PulpFest itself:

A shocking red PulpFest baseball cap, showing my pride in being a part of the convention.

The Bronze Gazette #76, the first issue from the new team of editor Chuck Welch, art director Kez Wilson and publisher Terry Allen. It was actually at G-Fest in Chicago where Kez gave me a copy of this fine magazine, but it made more sense to mention it here. Look for my further comments in a review column that will post sometime in the next three days.

Love Story Writer by Daisy Bacon [Bold Venture; $14.95], which is a reprint of a 1954 book on how to write and market romance stories by the editor for almost 25 years of Street and Smith’s incredibly successful Love Story Magazine. I hope to read and review this one  within the next couple weeks. 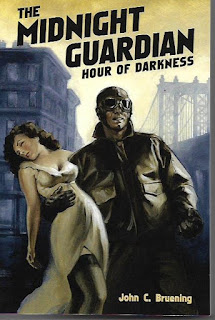 The Midnight Guardian: Hour of Darkness by journalist, writer and fan John C. Bruening [Flinch! Books; $16.95]. This is my pal John’s first novel and I’m looking forward to reading it.

Adventures of Supergirl #1-4 [DC Comics; $2.99 each]. I bought them at the comic-book store that’s part of the food court and shopping connected to the hotel. Based on the television series version of the character, they didn’t do much for me. They weren’t bad comic books, but neither were they very good comic books.

Mr. Jigsaw #14 by Ron Fortier and Gary Kato [Redbud Studio; $2.99]. Veteran readers of my review columns from the late Comics Buyer’s Guide to this bloggy thing of mine know how much I love this all-ages super-hero series. I’ll have more to say about this issue in a few days.

The Pulpster #25. This is the official magazine of PulpFest 2016. It’s a classy publication filled with informative articles on the pulps and their creators. Add it to the pile of stuff I really want to read real soon now.

Rodney Schroeter gave me several issues of The Current, a monthly giveaway newspaper he edits in Wisconsin. He later sent me several more issues. I now know more about his part of the country than my own. He also sent me Human Interest Stuff, a comics adaptation of an Albert Payson Terhune story drawn by William Messner-Loebs. All of this booty from Rodney will be further discussed in the review column I’ve mentioned above.

At 3:00 pm, Anthony Tollin and I were scheduled to do “Ten Years in the Shadow’s Sanctum,” an overview of the Sanctum Books’ decades of producing handsome volumes of The Shadow, Doc Savage, The Black Bat and other pulp hero books. I was again substituting for writer and historian Will Murray whose essays have always been a big part of the Sanctum Books publications.

I was pretty qualified to be part of this presentation by virtue of having been friends with Tollin for closing in on half-a-century. I interviewed him about his careers in comics, old-time radio and now pulp fiction publishing. About the only thing we didn’t cover at length was his love of dachshunds. In addition to all his other accomplishments, several of his dogs have been bonafide champions. The man knows dogs as well as he knows comic books, radio shows and pulp magazines. He also owns a hundred pairs of stretch socks. All I’ve got on him is an Inkpot Award and my innate cuteness.

Our panel was very well received. I always enjoy appearing on such panels with Tollin. We have fun and I learn stuff. It’s an enticing combination.

PulpFest 2016 would continue through 2:00 pm on Sunday, but I got antsy about the writing awaiting me at home. Especially since I had a library presentation to give and two more conventions to attend in the next three weeks. If I’d been able to buy the travel laptop as planned - it’s coming soon - I probably would’ve stayed through the evening and morning. Instead, I checked out of the hotel, said my goodbyes and drove back to my Medina home.

PulpFest has not yet announced its plans for 2017. They may not be returning to the Hyatt Regency and the Greater Columbus Convention Center. With my life taking some interesting turns, I don’t know if I’ll be back next year.

I certainly hope I’ll be able to attend PulpFest 2017. It’s a great event. If you have even a mild interest in pulp magazine fiction, if you enjoy new stories and novels in that tradition, I think you will have a wonderful time at the convention.

Posted by Tony Isabella at 8:19 AM