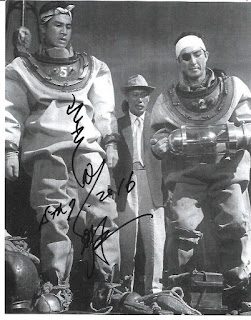 Eddie and I took the suggestion to attend the convention’s Friday morning orientation session to heart. Promoter J.D. Lees and other members of the convention committee did an outstanding job getting us newbies ready for all the G-Fest wonders to be enjoyed over the weekend. He also talked about the show guest list, including, much to my surprise, yours truly.

I didn’t expect any egoboo (ego boost) to come with my being listed as a special presenter. Yet there I was in the program book and on every convention poster at the show. J.D. introduced me and asked me to stand up, which generated a round of applause. He asked if I would be signing and charging for autographs.

While I wasn’t going to be doing any scheduled signings, I told the fans they could feel free to grab me during the convention if they had something they wanted me to sign. In consideration of my age, I did ask they grab me gently, which got a good laugh. I also said I wouldn’t be charging for my signature, which earned another round of applause. I know paying for autographs can put a real bite into a fan’s funds and, though I might charge for signing at some of my 2017 appearances, I was feeling the love at G-Fest. My signature will always be free at this convention.

In truth, the charge for autographs at G-Fest was very reasonable. My convention budget was tight, but not so tight that I would pass on getting a signed photo of Akira Takarada as Hideto Ogata in the first Godzilla movie. The cost was just $25, making it one of the best convention bargains I’ve ever come across.

Some observations about the 82-year-old Takarada, even though I’m jumping the gun on his panel appearances. He is a handsome man who looks much younger than his years. He was impeccably-dressed in a suit whenever I saw him. He’s an elegant man who looks every bit the movie star he is. Despite the language barrier, he was always and unfailingly friendly...and very appreciative of the regard in which he is held in by American fans.

Eddie and I went hither and yon during this first day. His day was interrupted by calls from his crew back in Ohio, but I had no such encumberments.

I walked through G-Fest’s artist alley, one of the more unusual artist alleys I’ve ever seen. It was set up in a hotel restaurant that closed some time back. It was a creative use of space, which featured over three-dozen artists and other creators. I didn’t get to talk to more than a few of them over the weekend - so much cool stuff to do and see at G-Fest - but I did say “hi” to comics artist Matt Frank and tell him how much I’ve enjoyed his work on the IDW Godzilla comic books.

On Friday and a few other times during the convention, I watched parts of G-Pardy, a kaiju quiz game hosted by Skip Peel and based on the Jeopardy game show. Like its inspiration, G-Pardy gave me a massive inferiority complex. Even more so than the original where I can at least get some of the questions right. Throughout the con, I would be impressed by how well the fans knew their Godzilla and other kaiju stuff. My own capacity for retaining minute details has diminished with age and the availability of online knowledge when I really have to get something right. I guess I’ve become more of a big picture guy in my dotage.

G-Fest is about as family-friendly event as I have ever attended. I saw many parents with their children and more than a few entire families. One of the more touching moments I saw was in the hallway outside the ballroom sessions. A youngster, maybe twelve, thirteen tops, looked at his mom and said:

Thanks for bringing me to G-Fest!

Early Friday afternoon, I headed over to the Kennedy room for Kevin Derendorf’s excellent “All Manga Attack!” presentation. This was a compact but informative overview of giant monster manga in Japan. I found the talk and images so fascinating that I neglected to take many notes and most of the ones I did write down don’t quite make sense to me right now. Here they are...

Damn! Some of these fans know their shit!

That last one might be unrelated to the presentation. I know that’s the title of a manga of which a few volumes are floating around my Vast Accumulation Of Stuff. It might also be a cosplay note since I wrote several of those in my convention notebook.

Unfortunately, I neglected to write down the URL of a website where translated versions of some of these giant monster manga have been posted. If anyone reading this can direct me to said website, I’d be grateful. Even though that information will most certainly wreck havoc on my deadlines.

Eddie and I took a break from G-Fest to have lunch at Portillo’s in nearby Niles. My son was on a mission to eat his weight in Italian beef sandwiches from a city (Chicago and thereabouts) renowned for them. I went with a hot dog because that seemed less likely to put me down. Both of us enjoyed our meals. If there were a Portillo’s in our Medina, Ohio neck of the woods, I have no doubt we would be regular customers. Great place.

The G-Fest dealers room was packed with vendors and fans. There was often a line of fans waiting to get into the room, but I was able to walk right in after it has been open for a while. To my surprise and delight, the first person in the room who I knew but had never met was Keith Wilson.

Kez is an incredible illustrator and designer who puts together the covers for my friend Anthony Tollin’s line of pulp reprint volumes. He has also created and still adds new images to his fantastic Doc Savage Fantasy Gallery. Images like this one: 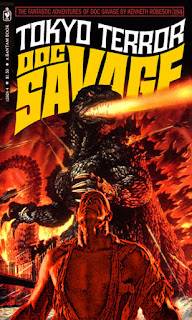 He’s also the art director of The Bronze Gazette, the long-running publication now being edited by Chuck Welch and published by Terry Allen. Since I chatted with Chuck at PulpFest 2016, I’ll save any further comments about this terrific magazine for that con report.

The second person I knew but had never met before was that master of kaiju knowledge August Ragone. He’s a distinguished author (Eiji Tsuburaya: Master of Monsters), blogger and event promoter. We have exchanged Facebook messages and e-mails for years, but this was the first time we were able to chat face-to-face. August was there to promote the 50th anniversary of Ultraman and did several panels on that legendary hero and other topics over the weekend. 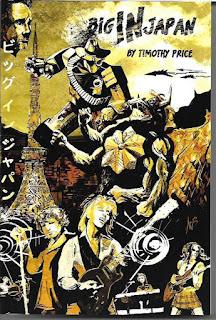 I did make one purchase. Seeing a youngster at a booth selling his dad’s novel, I bought a copy of Timothy Price’s Big in Japan, the first in a series of books. From Amazon:

The planet has fallen under siege to the evil Yokai witch, Oko Rikoku, and now she's called the forces of nastiness to bring forth the mightiest daikaiju the world has ever seen! Now it's up to the Earth Intelligence Organization and their latest recruits of rock star agents to finally put an end to her notorious one-thousand-year reign. Enter Tommy Lynn Taylor and his band, F-Bomb, who, while playing a string of Tokyo live houses, get caught up in the middle of an ongoing war: a war between giant robots, witches, atomic monsters and a highly classified, top secret government agency. When Tommy left L.A. to become "Big in Japan," he had no freakin' idea. "Big In Japan" is an exciting, humorous, and fast-paced novel by Timothy Price with intense, high-quality illustrations by Alan OW Barnes.

Later, Martin and Pam Arlt, who have become my guides to all things kaiju, told me it’s an excellent novel. So, now that I’ve written about it here, I can put it on my “read this soon” pile.

I wanted to be rested for the evening’s festivities, so I went back to my room and watched Daikyoju Gappa (Gappa, The Colossal Beast), also known as Monster from a Prehistoric Planet and Gappa: The Triphibian Monster on the hotel’s in-house channel. I should write about this movie in some future bloggy thing.

My resting mission accomplished, I was ready for the convention’s official opening ceremony and more evening fun. I’ll tell you all about it when my G-Fest report continues tomorrow.

Posted by Tony Isabella at 9:18 AM