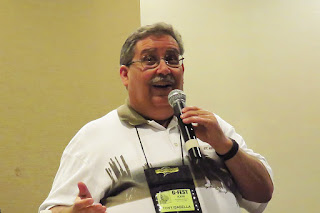 Saturday would be my busiest day at G-Fest. There were events and panels I wanted to attend. I needed to prepare for and then give my “Kaiju in the Comics” presentation. I wanted to visit artists alley again and also check out some of the other rooms I hadn’t been to.I needed to get it all done on Saturday because Eddie and I would be leaving early Sunday morning for another Chicago adventure. That last sentence is foreshadowing, your sign of quality writing here and elsewhere. Points to the first bloggy reader who can identify where I stole that from.

First on my list was the Akira Takarada interview conducted by J.D. Lees and Robert Scott Field. Takarada was the star of the original Godzilla movie as well as Mothra vs. Godzilla, Monster Zero, King Kong Escapes and others. It was a great session with any language barrier not diminishing it in the least.

Takarada talked about the timing necessary to the roles he played. He spoke admiringly of Momoko Kochi, who played the haunted Emiko Yamane in that first Godzilla film. He also had terrific memories of his friendship with and working with American actor Nick Adams, his co-star in Monster Zero.

Takarada has appeared in over 200 movies. He told us that the ones that were the hardest to make are the ones he remembers best. When a fan asked the undiplomatic question about Takarada’s cut scene in the Godzilla film made by Legendary Pictures, Takarada answered in a diplomatic and graceful manner. However, he did mention that the studio had promised to give him the suit he wore in that scene and has not, at this writing, sent it to him.

On my second pass through artists alley, I bought Kaijuverse: Book 1, Irokus: Mirror Image [Dragonfyre Studios; no discernable price on the book, but I paid fifteen books for the 120-plus-page graphic novel]. Writer Wayne Smith was at the booth and we chatted a bit. Artist Frank Parr was also at the convention, but I never got the chance to return to artists alley to meet him. I generally enjoyed this graphic novel, though there was one line of dialogue that hit me as incredibly wrong. Alas, tease that I am, you’ll have to wait until I actually review the book to find out what that line was. I am an evil, evil man.

I also stopped by the artists alley table shared by Sojiro Uchino and Hiroshi Sagae. I watched a short clip of their Gotouchi Kaiju project, a fun, lively tale of kaiju hiding among us, disguised as common place objects and things we see every day. Sort of like TV’s The Real Housewives of Places Where You’d Never Ever Want to Live, but with monsters who seem much nicer than those housewives.  The project is still in the formative stages, but I hope Sagae/Uchino can bring it to fruition.

I headed back to the ballrooms for Linda Miller’s spotlight panel. Interviewed by Lees, she shared terrific memories about her life in Japan and after she had moved back to the United States. Her charm and her natural storytelling makes me wish that she would get back into acting and that she would write her autobiography. She’s just one of those people you can’t help but love a little bit. Should my future forays outside comics bear successful fruit, I’d love to cast her and Takarada. Yes, I am a dreamer.

Next up for me was my “Kaiju in the Comics” panel. Martin Arlt had prepared the slideshow for the presentation and printed a copy of the notes I had left at home. So I was about as well prepared as I could me...and somewhat intimidated by the size of the audience in the ballroom.

The presentation went very well. I talked about monster movies that inspired by love of the genre: King Kong, Gorgo, Beast from 20,000 Fathoms, Them!, and, of course, the original Godzilla. I gave a bit of background on the Shock Theater packages that brought great old movies to their young television audiences. I praised the amazing Ernie Anderson whose portrayal of movie host Ghoulardi made him the hero of a generation of Cleveland kids.

With the slides in the background - and, boy, did Martin do a fine job preparing the scans I sent him - I showed and talked about a few of the giant monsters who showed up in the horror comic books of the 1950s. There weren’t many of them.

DC Comics was next. We showed examples of their comic books using giant monsters on their covers to draw the attention of the comics fans who were also watching giant monster movies on TV. There were covers from The Brave and the Bold, Superman, Batman, Challengers of the Unknown, Sea Devils, Star Spangled War Stories, Tomahawk and my favorite of that era, the cover of Jimmy Olsen showing the cub reporter’s transformation into the Giant Turtle Man.

The Charlton comics (Gorgo, Konga and Reptilicus) got a “chapter” to themselves. Those 61 separate issues are among my most beloved comics of the 1960s.

Then came Marvel. What a wealth of information to cover. The giant monsters so prominently featured in pre-hero titles like Tales to Astonish. The use of monsters in super-hero series like Fantastic Four and even westerns like The Rawhide Kid. I talked about how the Marvel monsters started appearing in the super-hero mags and about  my own work on the short-lived “It! The Living Colossus!” series of the early 1970s.

My penultimate “chapter” - You get the feeling that maybe someone wants to write a book on this subject? - was Godzilla and Gamera in the American comics. After some spiffy Godzilla comics from Marvel and Dark Horse, IDW is doing wondrous things with Godzilla.

The final “chapter” of the presentation was on other modern comics staring the giant monsters: Enormous, Kaijumax, Kodora and Pacific Rim. My final slide showed Marvel’s new monster: American Kaiju, a soldier injected with the Lizard serum created by Dr. Curt Connors in the Spider-Man comics and the super-soldier serum that created Captain America...and then exposed to gamma rays. Who says the era of mad scientists is behind us?

I got through the slides with plenty of time for questions from the audience. The fans asked about my comics work and they asked about my favorite Godzilla and other giant monster movies. My memory for trivia was pathetic next to those of the fans, but I did the best I could. Some key points...

Yes, I do have a dream Godzilla project. I want to write a 12-issue adaptation of the first Godzilla movie that combines the Japanese and the U.S. versions while expanding on the character stories and other briefly-mentioned elements of the story. That said, if some publisher offered a decent paycheck to adapt just about any giant monster movie into comics and would allow me to add things to the film, I would happily accept that assignment.

Yes, I have aspirations to enter the monster movies business within the next couple years. One of my many projects for this year is to teach myself how to write a screenplay. Until recently, this comics guy never wanted to write anything other than comic books. Then I found how I enjoyed writing newspaper comic strips. Then I started wondering what other things I might enjoy writing. Monster movies was a no-brainer.

Yes, I love even bad giant monster movies. Even when I don’t like them very much.

Sorry, but, given how many different versions of Godzilla we have seen over the years, I’m sticking by my guns when I say my Godzilla is neither a carnivore or a vegetarian. For lack of a more elegant scientific term, he eats energy. Natural energy from the planet and man-made energy. That’s my view and I’m definitely sticking to it.

Sidebar. I was amused and just a little alarmed by how one of the fans seemed to take considerable issue with this position of mine. Are there continuity zealots in both comic-book fandom and Godzilla fandom? Godzilla is large. He encompasses multitudes.

Everything at G-Fest closed down at 4 pm. It would reopen at 7 with the final round of the G-Pardy game, the costume parade and other delights. Eddie and I decided to further his quest to eat Italian beef in large quantities.

We left the convention hotel and drove to Johnny’s or maybe it was Johnnie’s. There are so many Chicago-area restaurants with the same or a similar name. This place was awesome. It had outdoor seating and delicious food. After much deliberation and much eating of the Italian beef over the weekend, Eddie declared Johnny’s the best of the best. On Sunday morning, Dave Nunes, the man in charge of the G-Fest Dealers Room and its charity efforts, confirmed that Eddie was spot-on in that assessment.

Come back tomorrow for the concluding part of my G-Fest coverage. Leave it to me to take five days to talk about a three-day event. The words, they just come to me.

Posted by Tony Isabella at 6:00 AM